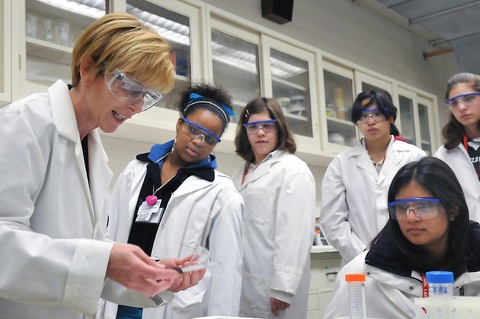 A simple 15-minute writing exercise could help young women succeed in math and science classes, according to a study released Thursday by the journal Science.

In recent years, women have earned nearly 60 percent of the college degrees awarded in the U.S., but only about one in five of the degrees granted in physics, computer science and engineering. What’s behind the gender gap? College administrators have looked for answers as they try to attract women to their science programs, and pundits have blamed stereotypes, societal pressure, and — controversially — a difference in innate abilities between the sexes.

Now, a new study suggests that the psychological effects of subtle stereotypes are at least partly to blame for the achievement gap — and that a remarkably easy intervention could help more women stick with science. Social psychologist Akira Miyake and his colleagues at the University of Denver found that for women in an introductory college physics class, a simple writing exercise that bolstered the students’ sense of self-worth helped raise their grades significantly, pushing many of them from a C to a B in the class.

Miyake and his colleagues studied 399 students (286 men and 116 women) in an introductory physics class at the University of Colorado. The class was designed for students considering a science major. Twice during the semester, the researchers asked the students to spend 15 minutes writing about personal values such as relationships with friends and family, or the importance of learning.

Half of the students were asked to choose the three values from a list of ten that they found most personally significant, and to write about why those values were important to them. The other half of the students — the control group — chose the three values that they found least important and wrote about why those values might be important to someone else. The students did the exercise twice — once in class during the first week of the semester, and once in an online homework assignment before the first exam.

For the men in the class, the writing exercise had no effect on their performance.

How could such a simple intervention have such a powerful effect for women? The researchers explain it this way: Many women begin their physics or other science classes aware of the stereotype that men are better than women at science. Knowing about that stereotype, and worrying that they might confirm it by doing badly in the class, is stressful and takes their minds and their concentration off the class material. Psychologists have found evidence of that hurdle, which they call “stereotype threat,” among women, blacks and other groups that have to deal with negative stereotypes.

The values-affirming writing exercise, the researchers hypothesize, helps bolster the students’ sense of self-worth and personal integrity, take their mind off the “stereotype threat” stress, and allow them to focus on learning. Then, that early focus pays big dividends:

“Once you do reasonably well on first midterm and you start to feel confident, then you get this snowballing effect that could multiply throughout semester,” says Tiffany Ito, one of the psychologists who worked on the study.

The research is actually the latest in a series of studies that have found a similar effect in different groups. In one study published last year, Stanford psychologist Geoffrey Cohen (also a co-author on this paper) found that the writing exercise helped black junior high school students raise their GPA by nearly half a point over two years.

Claude Steele, a social psychologist and provost at Columbia University, says he finds the line of work exciting. Steele, who first coined the term “stereotype threat” and has done years of research on how it affects black students, says that while stereotype threat can’t account for all of the achievement gap, it does play a large role, especially for students at the “vanguard,” such as women who intend to major in science.

“When people think about the achievement gap they don’t think about these social psychological factors, they think ‘we need to get them more skills and hold everybody more accountable.’ They don’t see the role of something like this,” Steele says. This study, he adds, “demonstrates the real-world power of these ideas.”