What it’s like to see colors for the first time

This was my first reaction, in all of its unvarnished glory, after I thought I was seeing red and green for the first time.

Not long ago, I learned that a company called EnChroma had developed glasses that claimed to correct colorblindness for red-green colorblind people like myself. So I sent for a pair. They arrived, nestled in a black carrying case, a couple days later.

Before their arrival, I had laid out a plan. I would thrust myself into colorful situations. I would stroll through botanical gardens, peruse the color swatches at my local Home Depot and study a Roy Lichtenstein painting.

I never expected I’d get emotional over a Mountain Dew can.

The can was half-empty, directly in my line of vision as I put on the glasses for the first time. I found myself fixated on the Mountain Dew logo, studying all the different shades of green it contained. I was awash in awe. You might call the design garish, but to me, at that moment, it looked magnificent. Elsewhere on my desk, a red ball and a red pen called for attention.

While the manual warns against “flipping,” or raising and lowering the glasses, as it weakens the effect, I ignored the warning. I couldn’t help peering over the glasses, comparing the two views in disbelief.

As a kid, I was forced to sit out science experiments that involved color. There was the embarrassing time my graphic design professor described my business card as “flesh-colored.” And don’t even get me started on green-colored paper. When teachers printed assignments on green paper — and they do more than you’d think — I’d have to tilt the paper so the black ink reflected in the light.

I never felt deprived by being colorblind. I had no plans to be a pilot or a wedding planner. Instead of labeling my clothes as many colorblind people do, I opted to own only one green shirt. Usually, I rely on another set of eyes — a friend, a co-worker or a stranger — to avoid minor embarrassments in our highly-coded world.

The term “colorblindness” suggests that the colorblind shuffle through life in a black-and-white reality. And while such a condition exists — achromatopsia — the majority of colorblind people have a mild form of color vision deficiency. In other words, we have difficulty distinguishing certain colors.

Colorblindness affects about 14 million Americans, mostly men, and ranges from mild to severe. Although in rare cases, people have trouble with blues and yellows, the most common form is red-green colorblindness. About eight percent of males are born with the inherited color deficiency, while fewer than one percent of women, who are normally the carriers for the genetic anomaly, have it, according to the American Optometric Association.

In the back of our eyes are cones in the retina that allow us to see a vast range of colors. Pigments in these cones absorb specific wavelengths of light and transmit signals to the brain. These signals help us identify color. In the case of colorblind individuals, the red and green cones overlap too much, sending muddied information to the brain, said EnChroma co-founder Donald McPherson, who is also a glass scientist.

“When the brain does the calculation to figure out a color, it comes up with the incorrect sensation,” McPherson said.

Before EnChroma would send me the glasses, I was asked to take a test. It turns out I have a particular type of red-green color deficiency known as Strong Deutan. Symptoms for that include “significant color confusion,” according to the results of the test. “Green, brown, yellow, orange, and red may appear confusingly similar. This makes ‘naming’ the color difficult. Blue and purple are frequently confused. Pink can be very ‘muted’ so it looks essentially gray.” I nodded in agreement at every instance listed.

EnChroma’s sunglasses, then, act as a filter by carving out specific wavelengths along the visible spectrum that enable the photoreceptors in the eye to distinguish between red and green, thus reducing the overlap. EnChroma said the sunglasses works for four out of five people.

The manual suggests that the wearer observe the colors of things during a so-called “adaptation period.” While some people immediately notice real differences, McPherson said, others experience a much more delayed response.

As an extreme example, McPherson relayed the story of a retired Berkeley neuroscientist who took the glasses on vacation to Hawaii. He reported finding the experience underwhelming. Then he saw a green traffic light.

“[He] said he had to pull over because he had this epiphany that he has finally seen [green],” McPherson said. “He had been receiving the right information, he just hadn’t been able to process it.”

After that first day, I test drove the sunglasses in many situations. The first thing I noticed at the botanical gardens was the moss. Without the glasses, the moss appeared to me as one shade — a dull greenish-brown. With them, I saw many different shades of yellow, green and brown. With them, I saw where the patches of green ended and the brown and yellow ones began. This was one of the most striking effects of the glasses. It wasn’t just colors I’d been missing, but the nuances within the colors. 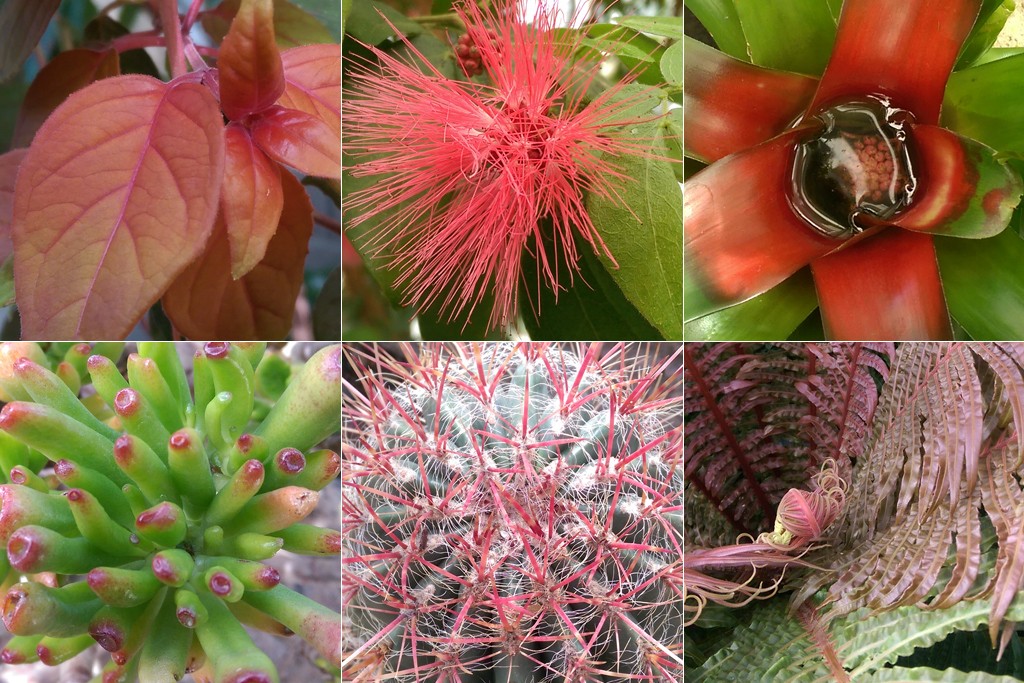 While visiting the local botanical gardens, I took pictures of every plant that jumped out at me while wearing the EnChroma glasses. Photos by Joshua Barajas

A trip to a local year-round Christmas store was both overwhelming and nauseating. Traffic lights, too, were much more brilliant.

The glasses worked best in strong sunlight. The color-boosting effect diminished on cloudy and rainy days and other low-light environments. And although indoor models have to work with less light, I could still see a co-worker’s busy tie come into better view.

Through all of this though, a question nagged me. Was I truly seeing reds and greens as people with normal color vision do?

EnChroma says yes, promising “color for the colorblind” with its products. In an email, McPherson insisted I was “really, truly seeing the correct colors.”

But not so fast, said Dr. Karl Citek, chair of the AOA Commission on Ophthalmic Standards, a group of experts that deals with standards and product claims. The enhancement from the EnChroma sunglasses and other iterations of these specially-tinted eyeglasses are impressions of the real thing, but likely fall short.

“Perhaps a better word is ‘compensate,’ but I see where EnChroma is coming from,” Citek, also a college professor of optometry at Pacific University, said in an email. “By the same token, the glasses I wear because I’m nearsighted don’t ‘correct’ my nearsightedness, only compensate for it (even though all medical professionals will call my prescription a ‘correction.’)”

I may never have an answer to my question. But I now have a gateway to a richer, eye-catching world — and a Mountain Dew can as my guide.

Left: I test drove a pair of indoor sunglasses that claimed to correct colorblindness. A Mountain Dew product was among the many items that caught my eye. Photo by Ariel Min