Column: The never-ending debate over finishing your antibiotics

One of the most well-known concepts in medicine, to both doctors and patients, is that you must absolutely finish a course of antibiotics. The thinking goes that if you don’t eradicate every last bacterium causing your illness, the survivors can develop resistance and wreak further havoc.

This concern was voiced by the venerated Alexander Fleming himself — discoverer of penicillin, the first true antibiotic — which is part of why the idea is so enduring. Toward the end of his 1945 Nobel Prize acceptance speech, Fleming warned that “there is the danger that the ignorant man may easily underdose himself and by exposing his microbes to nonlethal quantities of the drug make them resistant.”

This proclamation is only half true. If humanity truly wants to slow the spread of antibiotic resistance, we need to also look at the overprescription of antibiotics.

Recently, a group of British health professionals penned a compelling analysis in The BMJ, advocating for shorter antibiotics courses — even going so far as to say that maybe patients should stop taking antibiotics once they feel better.

As the list of antibiotic resistant bacteria grows, so have the extraordinary efforts to prevent the spread of infection. Science correspondent Miles O’Brien and economics correspondent Paul Solman team up for a report.

That’s because Fleming only described one version of resistance: Where bad bugs get worse by surviving an “underdosing” of antibiotics. Researchers call that “target selection.”

But there’s a flip side: Overusing antibiotics can cause usually nice bugs, with which we coexist, to gain resistance. The germs jump at the opportunity to take over ecological niches, like the gut of a patient on antibiotics. This form of resistance is called “collateral selection.”

The BMJ analysis, led by infectious disease specialist Martin Llewelyn, proposes that “most of the bacterial species now posing the greatest problems do not develop resistance through target selection” and that “collateral selection is the predominant driver of the important forms of antibiotic resistance affecting patients today.” 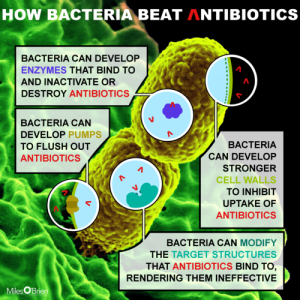 The different mechanisms by which bacteria acquire antibiotic resistance. Infographic by Fedor Kossakovski

In other words, overdosing antibiotics is a bigger threat than underdosing.

Yet many health practitioners and patients are so worried about breeding superbugs through underdosing that antibiotics courses are often unnecessarily long. The researchers’ analysis showed that shorter courses of several quinolone-class antibiotics are just as effective as the longer courses that are currently prescribed. But the team conceded that more research on the topic is needed.

“No such data exist for β-lactams, which are the main antibiotic class used,” Llewelyn and colleagues wrote. “Current international guidelines recommend 10-14 days’ treatment with β-lactams, based purely on absence of data for shorter courses.”

Many health professionals are so worried about underdosing that most antibiotics prescriptions for adults are not calibrated to account for differences in patients. For example, “under current practices, a 200-pound, 6-foot-2-inch man diagnosed with pneumonia would receive the same dose of antibiotics as a 124-pound, 5-foot woman with the same condition, despite their dramatically different body sizes.”

Though antibiotic resistance is a growing problem due to overuse of the drugs at home, the issue is already grave in hospitals where the concentration of antibiotics and at-risk people is high. That’s why hospital staffs around the world are on the front lines of developing more appropriate protocols for using antibiotics through a collective effort called “antimicrobial stewardship.”

“We’re facing a crisis,” said Dr. Shira Doron, physician director of the antimicrobial stewardship program at Tufts. “What we need to be doing is treating until the person feels better and then stopping.”

This approach is not without its risks, Doron acknowledged: “Some of those people may have a recurrence of infection. But the number of antibiotic days that you’re saving the general population if you take that approach is so large and the impact is so large that it needs to be sort of the next phase of medicine.”

At Tufts Medical Center in Boston, doctors and nurses bombard rooms with ultraviolet light, which causes genetic damage to bacteria, rendering them unable to reproduce. Photo by NewsHour

But carefully managing antibiotics courses is a tough ask for already overworked doctors. A multitude of factors pressure doctors to overprescribe antibiotics, added Dr. Helen Boucher, one of Doran’s colleagues.

“I think that especially in America, patients come in with an agenda,” Boucher said. “They expect an antibiotic. It takes longer to not give an antibiotic. We have shorter and shorter times per interaction with patients. When I started, it was 30 to 60 minutes, now it’s 15 to 30 minutes. It’s harder to have that conversation to explain that we’re going to do this test, see how you do, and then decide about an antibiotic and I’ll call you tomorrow. That’s a lot of work.”

“We’ve learned for a very few infections, ear infections in two year olds, you need to treat for the whole course. But for many others, we’re learning that shorter is fine,” Boucher said. “So, I think if you’re a patient at a doctor you should ask, ‘Do I need to take it all or not?’ And oftentimes, the answer will be ‘No.'”

Left: If humanity truly wants to slow the spread of antibiotic resistance, we need to also look at the overprescription of antibiotics, science journalist Fedor Kossakovski writes. Photo by NewsHour