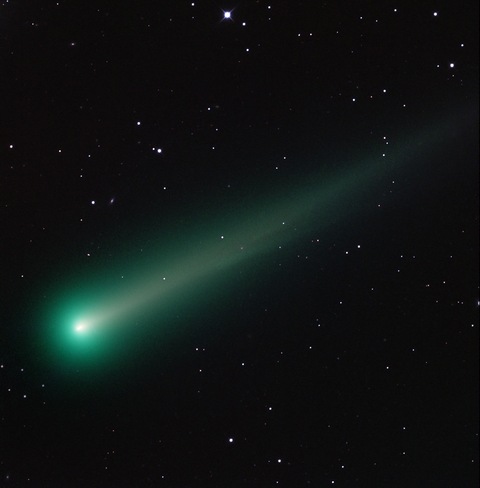 Comet ISON photographed via a telescope on November 8, 2013. Photo by Adam Block/Mount Lemmon SkyCenter/University of Arizona

While Americans cook their Thanksgiving turkeys on Thursday, a tiny comet called ISON will pass 684,000 miles above the surface of the sun and endure its own roasting. If the fragile little comet survives the trip, ISON just might generate a spectacular show in the northern hemisphere’s night sky until Christmas. It will be “a nice holiday comet”, said Jim Green, director of the planetary science division at NASA. What are the odds the comet survives? Right now, 30 percent, said Carey Lisse, astronomer and head of NASA’s Comet ISON observing campaign. The “dirty snowball” is made of dust and ice, and it’s delicate. ISON is only about 2/3 to 3/4 of a mile in diameter, while an average comet is about 1.5 miles in diameter, Lisse said. As they pass the sun, comets lose an average of 3 feet of material–an enormous loss for a tiny celestial body like ISON.

ISON is making its first trip around the sun. It comes from the Oort Cloud which is 6 trillion miles away, well beyond the planets. As a new comet, it doesn’t have a thick, “baked” crust like other periodic comets, meaning it’s even more likely to crumble into dust and fall into the sun, said Karl Battams, astrophysicist at the Naval Research Laboratory. But even if no large pieces of the comet survive, it may still have a spectacular death.

“If it becomes a burnt-off cinder and survives, and it doesn’t have much ‘oomph’ left, then it will be faint from the ground,” Lisse said. “But I don’t think we’ll be disappointed.”

But if any part survives the trip through the sun’s outer atmosphere, the scattered dust from the comet could create a beautiful paintbrush in the sky, which is what happened to Comet Lovejoy last year, Lisse said. If that happens, the remains of the comet will travel over the North Pole through December, possibly into the holidays.

Stargazers can start looking for remains of the comet around December 7, about half an hour before sunrise in the eastern horizon, or after sunset in the western sky. Take some binoculars or a telescope for better visibility, but “your results may vary”, Lisse joked.

Comets lose gases and dust as they approach the sun, creating their characteristic tails which glow as they reflect the sunlight. They are brightest when they are closest to the sun, and Comet ISON will reach its closest point, or perihelion, between 1:00 and 3:30 pm Eastern Time.

But please, watch the comet safely from your computer, Lisse said. Staring into the midday sun looking for ISON will burn your eyes and cause permanent damage. Eager astronomers can watch its approach starting at 1:00 pm ET on this website, and NASA will host a Google Hangout to chat with astronomers about the comet and its amazing trip around the sun.

You can also follow the showdown between the sun and Comet ISON on Twitter with the hashtags #ISON #willitbreakup, follow @CometISONnews, and ask NASA scientists questions using #askNASA. 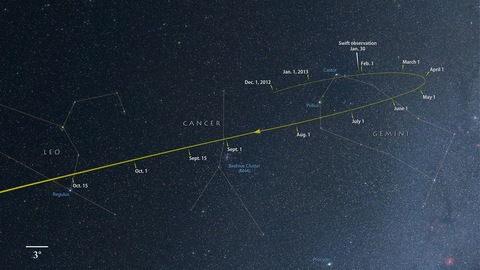 “Sungrazer” comets are pretty common; the Solar and Heliospheric Observatory (SOHO) satellite has spotted 900 since 1995. But scientists rarely get this much time to study comets like ISON, Battams said. Since ISON was first spotted in 2012, it’s been photographed, measured and scrutinized by telescopes on Earth and in space, and even by instruments on Mars and Mercury as the comet passed the inner planets.

While it isn’t generally visible to the naked eye, Comet ISON emits a brilliant lime-green, a common color for comets, said Adam Block with the Mount Lemmon Sky Center at the University of Arizona who photographed ISON with a telescope.

But ISON has been “acting weird”, Battams said. The comet has gone through flare-ups recently, suddenly growing brighter and then dimming. Its gas and dust emissions began fluctuating, which may mean that the comet has already fallen apart, he said.

“It’s driving us crazy and we’re throwing our hands up at times. At the same time, it’s fabulous because it’s doing something really different and that’s what we hope for,” Battams said.

STEREO-A spacecraft’s latest images of ISON’s approach to the sun, on the right. Courtesy NASA

Even if it is falling apart, ISON is a great chance to study the sun, said Dean Pesnell, solar physicist at NASA’s Goddard Space Flight Center. As the comet’s ice and dust start evaporating around the sun, they break into particles which become ionized and start to glow. The glowing particles are then drawn to the sun, like iron filings to a magnet, he said.

“It will light up the sun’s magnetic field and we’ll see parts of the sun we don’t normally get to look at,” Pesnell said. “Here we have something going by that will leave tracer pellets and we will know what the magnetic field will do as [the comet] passes through.”

And as ISON falls apart, it will reveal the recipe for the planets, Lisse said. Layers of gas and dust peel off of the comet like an onion, he said, revealing the comets’ “ingredients” and how they’re made. Scientists know how comets come together to form planets, but they don’t know how the dust and ice in the universe forms a comet.

“Comet ISON is a relic,” Lisse said. “You need comets in order to build the planets, and this comet has been in deep freeze in the Oort Cloud halfway to the next star for the last 4.5 billion years…and we are going to watch it bake and boil.”