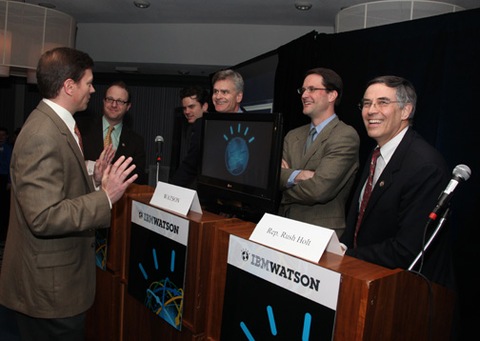 The New Jersey Democrat beat the scrappy computer $8,600 to $6,200, though no money was exchanged in the mock match.

Holt, a five-time Jeopardy! champion, had a leg up on other contestants and a home-court advantage — the match was on Capitol Hill. And being a nuclear physicist couldn’t have hurt.

Himes and Polis tweeted as the match unfolded and their chances of winning fell into a tailspin.

Going up against IBM’s Watson computer at Jeopardy tonight. Apparently he (?) crushed the real Jeopardy champs. Any brain limbering ideas?28 Feb via Twitter for BlackBerry®

Although Watson was just a little Atari when I was on the show 3 decades ago, he’s grown up & I’m slower than I was then. I watch in awe.22 hours ago via TweetDeck

@RushHolt Thanks Rep. Holt! Looking forward to our match this evening.22 hours ago via web

With Rush Holt on Floor. Apparently Watson tweeted Rush. I’m concerned. If a driver w/metallic voice picks me up, I’m walking.@rushholt20 hours ago via Twitter for BlackBerryÂ®

Ok. So I came in third behind Rush Holt (nuclear physicist) and @ibmWatson (supercomputer) but beat all the other humans. I’ll take that. 18 hours ago via Twitter for BlackBerryÂ®

I seriously CANNOT believe that @rushholt beat @ibmwatson. Bumper stix in his district: “My Congressman IS a rocket scientist.”18 hours ago via Twitter for BlackBerryÂ®

I played a full round against @IBMWatson tonight and was proud to hold my own: the final tally was Holt $8,600, Watson $6,20016 hours ago via TweetDeck

So who is Rush Holt? Holt emerged from a venerable political family. His father was the youngest senator in U.S. history, elected at age 29, and his mother was first woman to serve as Secretary of State in West Virginia, where he was born.

Holt launched his first congressional campaign in 1998, but not before establishing himself as a high-level physicist. He served as assistant director of the Princeton Plasma Physics Laboratory, famous for its magnetic-fusion research. He focused on alternative-energy sources and, according to his website, developed a patent for a solar-energy device.

Holt is a runner and an avid reader, with a soft spot for American history and revolutionary war battlefields, staffers say. In office, he’s pushed for more research and development funds, support for innovation and less dependence on fossil fuels.

“I was proud to hold my own with Watson,” Holt said in a Tuesday statement. “More importantly, I was proud to join IBM and other members of Congress to highlight the importance of science and math education and research and development. While it was fun to out-do Watson for one night in trivia; it is vital that, as a nation, we out-innovate, out-educate, and out-build the rest of the world for generations to come.”