Photomicrographs Capture Beauty, Complexity of Life Beneath the Lens 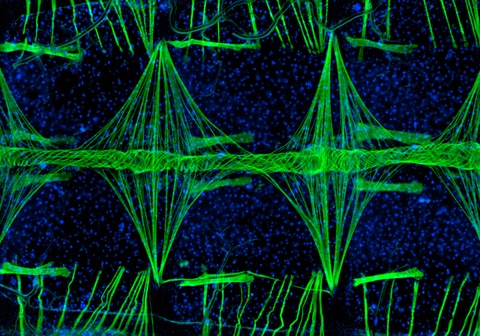 Want to see a mosquito heart? A starfish embryo? The crystals in crystallized soy sauce?

Then behold the Nikon Small World Photomicrography Competition, an annual contest for photomicrographs, or images taken through a microscope. The subject matter is tiny, but the winning images pack a punch. 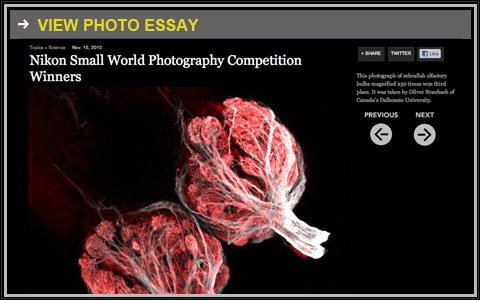 The contest’s subtext is that a high-powered lens can reveal an unseen natural world in breathtaking detail. Open to hobbyists and researchers, Nikon received more than 2,000 photo entries for this year’s contest. Entries ranged from the simple (an image of a snowflake 40 times its original size) to the bizarre (the photo of a female black aphid — a sap-sucking insect known as a plant louse — with multiple offspring visible inside its transparent body). The latter won this year’s popular vote.

King captured the photograph using a technique called fluorescence microscopy. The green lines in the photo are muscle fibers labeled with a green fluorescent probe, while a stain called Hoeschst 33342 colors the cell nuclei blue.

“The heart is the horizontal narrow tube that runs across the center of the image,” says JuliÃ¡n Hillyer, associate professor of biological sciences and the director of King’s lab. “The muscles that form the shape of diamonds… participate in the opening and closing of heart valves.”

King’s research is part of a larger project in the Hillyer Lab that involves studying a mosquito’s heart muscles, blood circulation and immune response.

Unlike the human circulatory system, where blood is pumped from the heart to the rest of the body through a closed system of vessels, mosquitoes have an open circulatory system. A mosquito heart propels blood along the length of the body to discharge it into open body cavities. Like a garden fountain, Hillyer says, “the (mosquito) heart is a pump that releases blood into a larger pool, and this blood slowly makes its way back to the pump so it can be circulated again.”

Hillyer hopes that a better understanding of how insecticides and disease-causing pathogens function inside this system can be applied to mosquito-borne disease. “We expect that our research will contribute to the development of novel pest- and disease-control strategies,” he says.