Rapidly thawing sea ice in the Arctic Circle has threatened polar wildlife and contributed to global changes in weather and climate. It has also opened the polar region for industrialization and resulted in new shipping lanes and a chance to drill for precious offshore oil reserves.

As the NewsHour reports this week on climate change and its impact on the people and businesses along Alaska’s Arctic border, we take a look at how operations in the Arctic by Royal Dutch Shell Oil, the first to drill for oil in the waters near Barrow, Alaska, have been fraught with accidents and controversy.

In 2012, the federal Bureau of Safety and Environmental Enforcement granted Shell Oil permission to drill for oil in the Beaufort and Chukchi Seas off of the Alaskan coast, the first in 20 years, reported CNN Money. According to the New York Times, the company originally intended to drill 10 wells and started its operations last year with two drilling rigs: the Kulluk and the Noble Discoverer.

The Obama administration granted Shell drilling rights on the condition that the company include underwater safeguards to prevent a disaster like the BP Deepwater Horizon spill in 2010. Shell spent approximately $4.5 billion for permits, equipment and an extensive campaign over six years to explore the Arctic for oil, the New York Times reported.

But the year was fraught with a series of accidents. The Natural Resources Defense Council compiled this timeline:

September 2012 – Caught off guard by sea ice, Shell is forced to halt drilling – just one day after it started.

September 2012– In an initial test in Puget Sound, WA, Shell’s Arctic oil spill containment system is “crushed like a beer can.”

October 2012 – The CEO of French oil giant Total says drilling in the Arctic is too risky.

Despite national fears of another offshore oil spill, Shell Alaska vice president Peter Slaiby assured the public that the company had learned from the Deepwater Horizon accident.

“We are raising the bar in the way we have been working with local communities,” he said. “We have made 450 different trips to consult and listen to any concerns. We believe the way we are doing this is important – not just for Alaska but for the wider Arctic region.”

But on New Year’s Eve, the Kulluk broke free of its tow lines during a storm and ran aground on Sitkalidak Island. The ship was carrying about 155,000 gallons of fuel and other hazardous materials, the Guardian reported. None of the fuel aboard spilled, but the accident prompted the Department of the Interior to review of Shell’s operations. In February this year, former Secretary of the Interior Ken Salazar
announced that Shell will not be allowed to drill in the Alaskan Arctic without improved safety measures.

“Shell screwed up in 2012, and we’re not going to let them screw up when they try to drill in the Arctic again,” Salazar said when the department released its report. 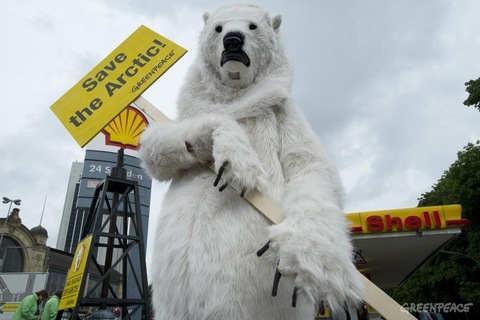 “Shell and its contractors are no match for Alaska’s weather and sea conditions either during drilling operations or during transit. Shell’s costly drilling experiment in the Arctic Ocean needs to be stopped by the federal government or by Shell itself given the unacceptably high risks it poses to both humans and the environment.”

Environmental activist organizations like Greenpeace escalated their protests against further drilling by starting the Save the Arctic campaign and collecting signatures to declare the region a global sanctuary.

The Environmental Protection Agency fined Shell $1.1 million for violations to the Clean Air Act. Noble Discoverer and the Kulluk’s engines released nitrogen oxide, ammonia and other pollutants in excess of what permits allowed. The EPA cited 23 violations of the air permits governing the Discoverer and 11 for the Kulluk, reported the energy blog Fuel Fix.

But critics said the fine was not harsh enough. Rebecca Noblin of the Center for Biological Diversity in Anchorage told the Associated Press in an email:

“Shell downplays the ugly effects of its lack of preparedness for Arctic drilling, but these fines tell a different story. The Arctic environment is significantly harsher and more dynamic than Shell has accounted for. Unless the Obama administration puts a stop to Arctic drilling, companies like Shell will continue to foul the Arctic air and water.”

“We finished the 2012 drilling season, didn’t have any incidents there, we didn’t have any accidents,” Odum said. “It was done safely; it was done from an environmental perspective, the way we wanted it done.”