NASA confirmed that its spacecraft slid into dwarf planet Ceres’ orbit at 4:39 a.m. today with no complications. “Dawn” will spend the next 16 months in the dwarf planet’s gravitational pull, photographing the largest known object in the asteroid belt.

“Since its discovery in 1801, Ceres was known as a planet, then an asteroid and later a dwarf planet,” said Marc Rayman, chief engineer of director of the $473-million mission, in a statement. “Now, after a journey of 3.1 billion miles and 7.5 years, Dawn calls Ceres home.”

After making a first stop at asteroid Vesta, another resident of the rocky belt between Mars and Jupiter, Dawn continued onward to Ceres, whose composition remained nebulous to scientists ever since the Hubble Space Telescope captured the earliest images of the dwarf planet.

“[Ceres] is sort of just staying hidden from our eyes, more than I had expected it to be,” Chris Russell, lead investigator of the mission, told the NewsHour in February.

But as Dawn edged closer to Ceres, the dwarf planet’s icy surface came into view. And what scientists saw from a distance was puzzling. A bright spot, then a smaller shiny companion, appeared on Ceres’ surface.

Last month, within 29,000 miles of the dwarf planet, Dawn revealed that Ceres’ bright white spot was actually two located in a large crater. What could the sun be reflecting off the surface of Ceres? Speculations are abound: Is it the crater of an icy volcano? A salt flat? A subsurface ocean? Until more concrete measurements become available, Ceres’ composition will remain an extraterrestrial cliffhanger.

Whatever the case, scientists do think Ceres shows signs of life-sustaining water.

“Ceres is actually the largest water reservoir in the inner solar system other than the Earth,” Jian-Yang Li, of the Planetary Science Institute in Tucson, Arizona, told Space.com.

Li said estimates water makes up nearly 40 percent of Ceres’ volume, although it’s unclear how much of the water is liquid, which is necessary for life.

Ceres, along with Vesta, is a proto-planet that can offer clues to the solar system’s beginning and understanding the formation of its larger counterparts.

Ahead of Dawn’s reappearance from Ceres’ shadow, we put together a timeline of the spacecraft’s 3-billion-mile journey. It is the first mission to reach the orbit of a dwarf planet and also the first to orbit two celestial bodies during a mission. 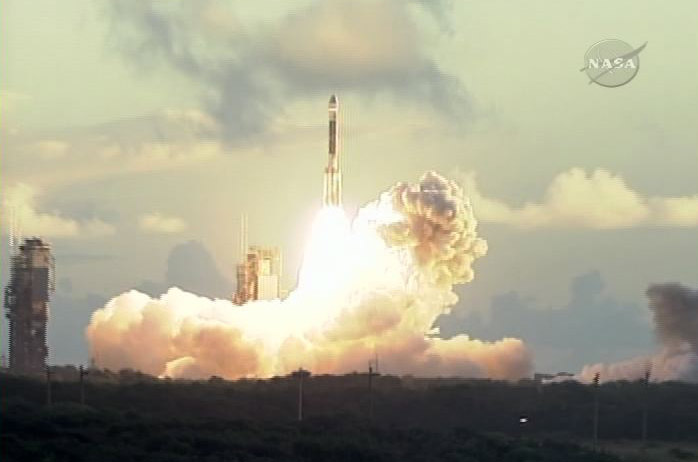 Dawn uses Mars to slingshot on to Vesta and Ceres, and tests its equipment.

The spacecraft returns its first pictures of Vesta. 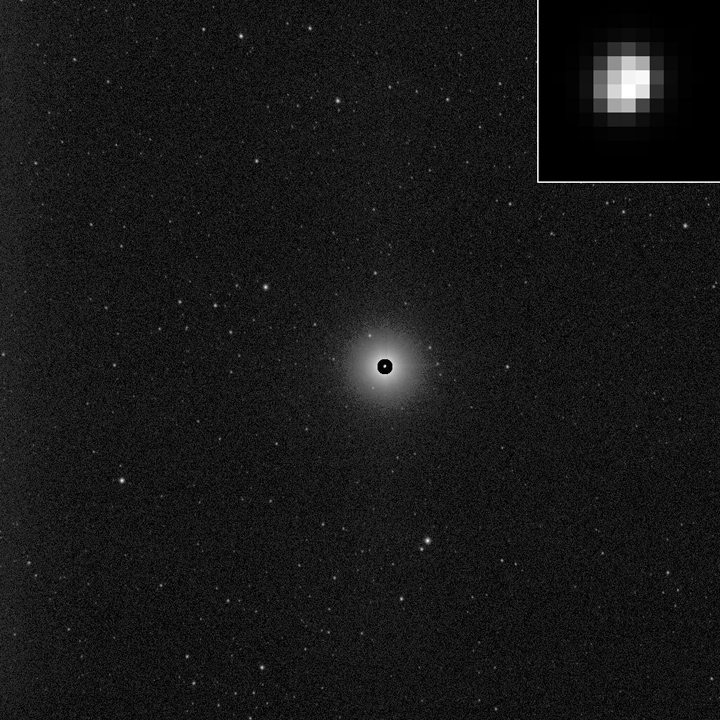 This image, processed to show the true size of the giant asteroid Vesta, shows Vesta in front of a spectacular background of stars. Image courtesy of NASA/JPL-Caltech/UCLA/MPS/DLR/IDA 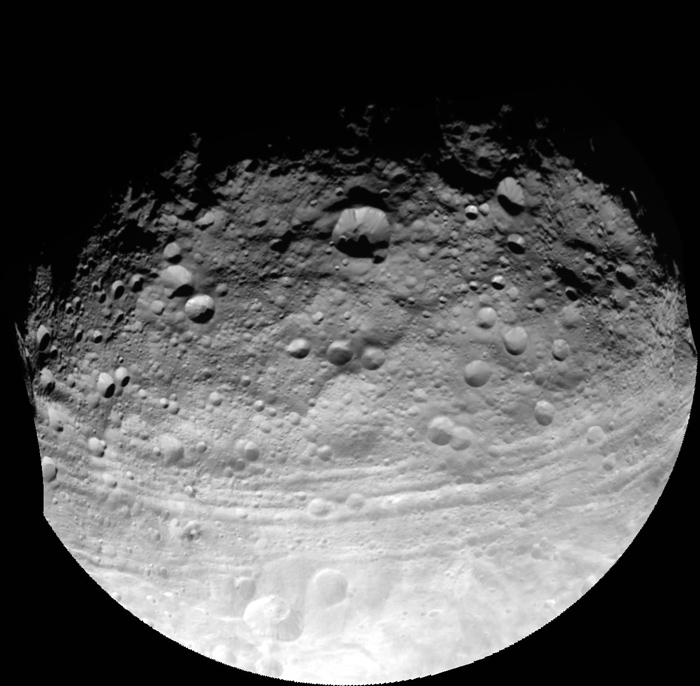 This full view of the giant asteroid Vesta was taken by NASA’s Dawn spacecraft, as part of a rotation characterization sequence on July 24, 2011, at a distance of 3,200 miles. Image courtesy of NASA/JPL-Caltech/UCLA/MPS/DLR/IDA

Vesta could have ice water beneath the surface.

Dawn mission finds that Vesta is more like the Earth’s moon or an early planet than it is an asteroid. It once had a subsurface magma ocean, and about 6 percent of the meteorites on Earth came from Vesta. 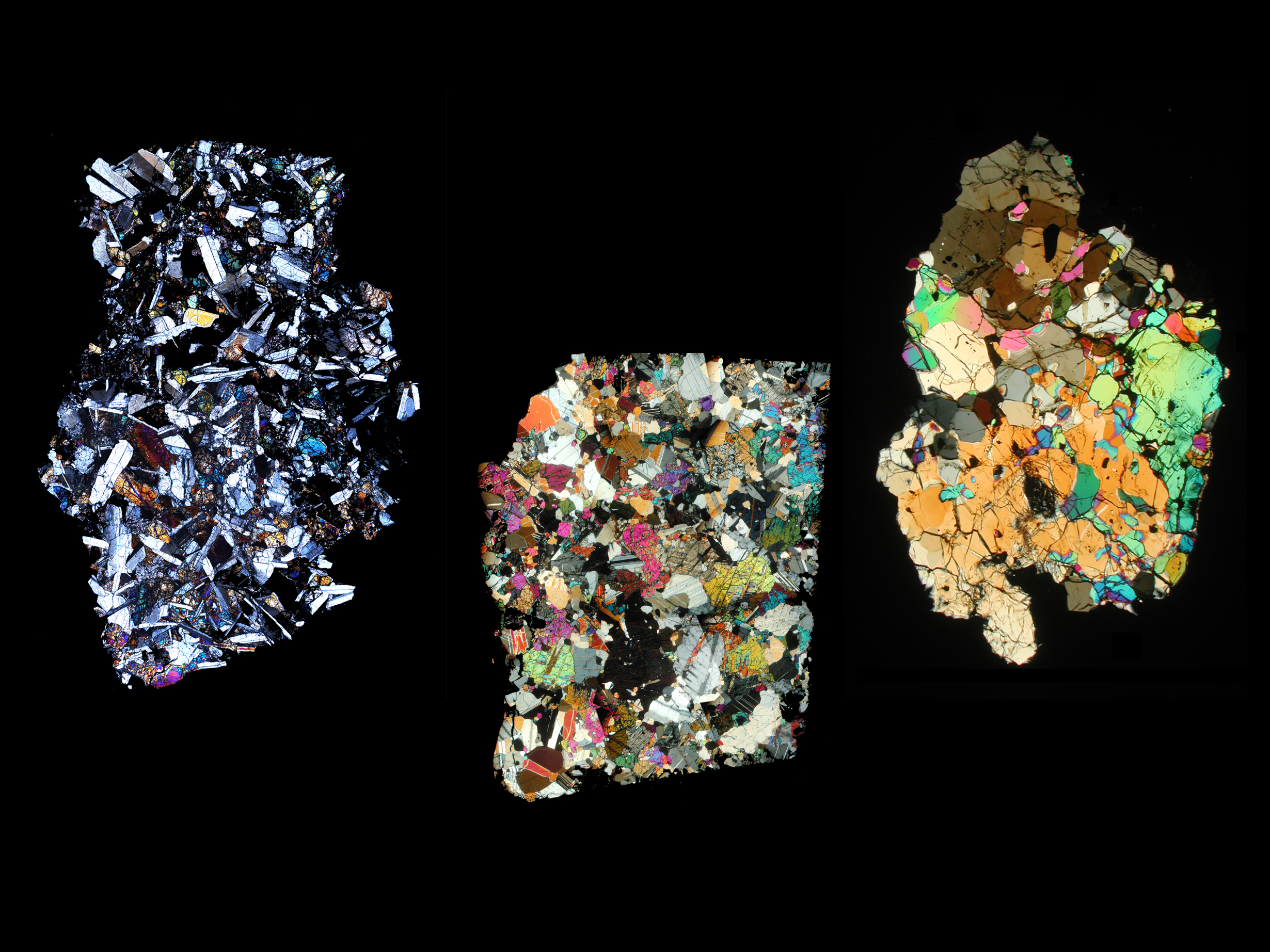 This image shows three slices of a class of meteorites that fell to Earth that NASA’s Dawn mission has confirmed as originating from the giant asteroid Vesta. The meteorites, known as howardite, eucrite and diogenite meteorites, were viewed through a polarizing microscope, where different minerals appear in different colors. Image courtesy of University of Tennessee

Dawn leaves Vesta to head on to Ceres, and takes a good-bye shot of Vesta as it leaves.

Studying the data from Vesta further suggests that Vesta is a “stunted planet”; a planet that could have been, but was halted early in its development.

It appears to have been bombarded by other asteroids early in its life, but the shapes of its gullies, craters and troughs still leave questions for astronomers. How did they form? Why do they look different from those on the Moon or Mars?

Color-coded images of the minerals on Vesta show the proto-planet’s brilliant colors. 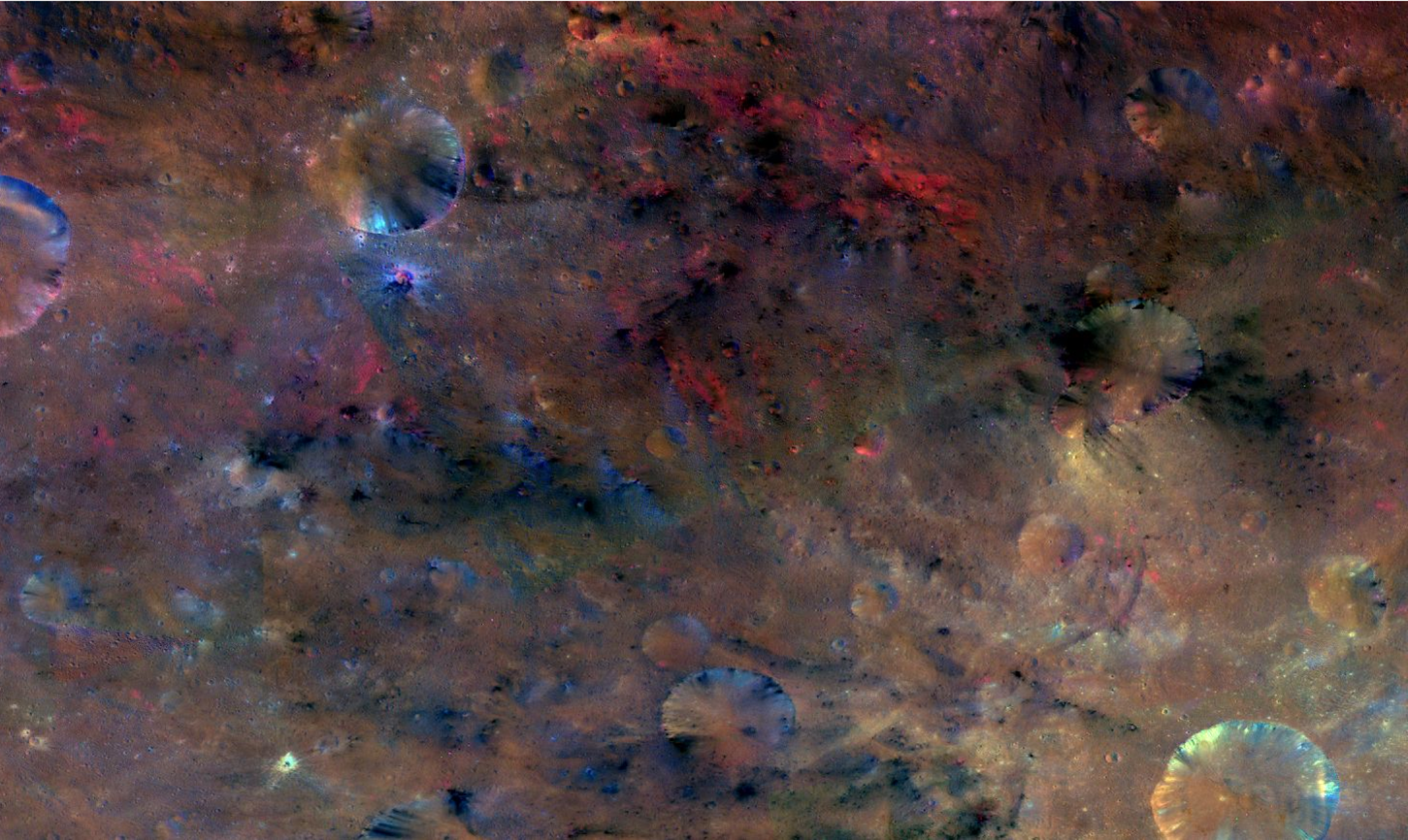 This colorful image from NASA’s Dawn mission shows material northwest of the crater Sextilia on the giant asteroid Vesta. While a large asteroid impact probably brought the black material, the red material may have been melted by the impact. Image courtesy of NASA/JPL-Caltech/UCLAMPS/DLR/IDA

Dawn has mechanical problems and goes into safe mode.

Dawn gets closer to Ceres, and sees mysterious bright spots on the surface. The bright spots could be ice volcanoes, salt, surface ice or water, but until Ceres gets closer we won’t know for sure. 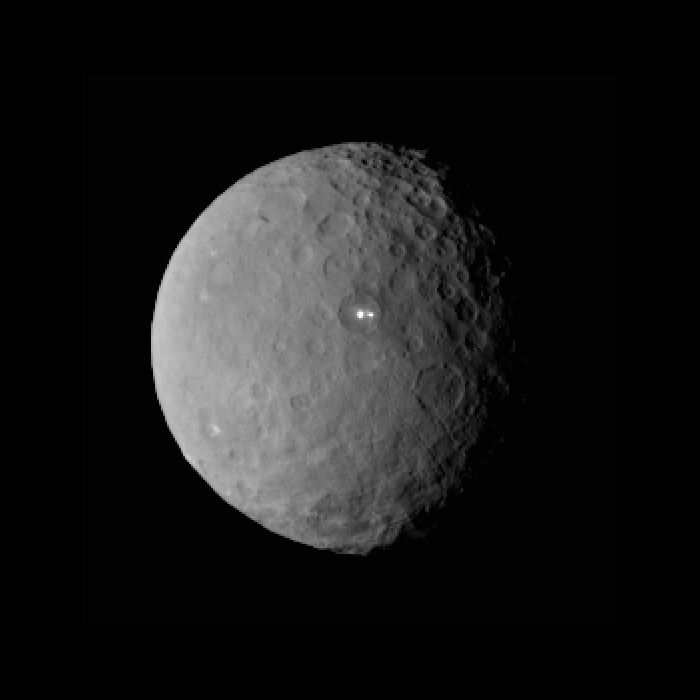 This image was taken by NASA’s Dawn spacecraft of dwarf planet Ceres on Feb. 19 from a distance of nearly 29,000 miles. It shows that the brightest spot on Ceres has a dimmer companion, which apparently lies in the same basin. Image courtesy of NASA/JPL-Caltech/UCLA/MPS/DLR/IDA

Left: Ceres is seen from NASA's Dawn spacecraft on March 1, just a few days before the mission achieved orbit around the previously unexplored dwarf planet. The image was taken at a distance of about 30,000 miles. Photo courtesy of NASA/JPL-Caltech/UCLA/MPS/DLR/IDA