Update January 20: Since this story was published, NOAA has delayed the launch until February 8.

On January 29, NOAA, the U.S. Air Force and NASA plan to launch the Deep Space Climate Observatory satellite, which will observe the Earth from a distance of one million miles and measure increased magnetic fields and particle fluxes from solar storms. Positioned between the Earth and the Sun, the satellite will act like an ocean buoy in space, warning scientists about incoming solar storms, said Doug Biesecker at the National Weather Service’s Space Weather Prediction Center.

For scientists watching, the launch will represent the end of a long wait. Known by its acronym, DSCOVR, the satellite has been in storage at NASA Goddard Space Flight Center since 2001. DSCOVR’s journey to space has taken more than a decade, mired in political controversy and tragic timing, said Ghassem R. Asrar, formerly NASA’s chief earth scientist and currently director of the Joint Global Change Research Institute, which studies solutions to global climate change.

In 1998, then-Vice President Al Gore approached NASA with an idea: a satellite that would take continuous photos of the Earth from the first LaGrange Point, or L1, one million miles from Earth. He hoped that the continuous stream of photos would encourage the public to care about Earth’s fragile environment. He cited Apollo 17’s famous “Blue Marble” image as inspiration.

At the time, Asrar saw the potential for much more. NASA’s space weather satellite, ACE, which was already located at L1, needed to be replaced. A new satellite at that orbit could provide better forecasting for solar storms that knock out electricity grids and communication systems on Earth.

After further discussions with Gore, NASA scientists dreamt up a satellite that would revolutionize climate science, said Adam Szabo, NASA’s project scientist for the mission. From that vantage point, scientists could image an entire sunlit side of the Earth in a 2048 by 2048 pixel image every two hours in visible, infrared and ultraviolet light. A three-color camera would capture the Earth’s ozone, cloud patterns, dust from the Sahara desert or vegetation growing around the world, Szabo said. At a million miles away, scientists could compare how the seasons change from year to year.

“Low Earth orbiting satellites have to stitch together images,” he said. “It can take a full day to piece together a full image of the Earth. From L1…you can start to study things like global cloud pattern changes. You can see large-scale weather systems as they change in a day.”

“We could predict where the next famine around the world would be before the next harvest begins,” he added.

The satellite would also measure how much solar radiation was being absorbed and reflected by the Earth, a key to understanding global warming, Szabo said. It would be like a thermometer for the entire planet, he said.

The scientific possibilities were exciting, and the mission would open up opportunities for education and communication about earth science, Asrar said.

“We took that very simple idea of a three-color camera and turned it into a full-scale science mission,” he said.

But at an MIT summit that March, before NASA could put out calls to the scientific community for proposals, Gore announced the satellite, which he named Triana after the sailor on Christopher Columbus’ ship who spotted North America, Asrar said. Suddenly, Triana was on the fast track and under intense political scrutiny.

Construction of the satellite was completed in 18 months, record-breaking time for such a project. At $150 million dollars, it was three times as expensive as Gore proposed, Asrar said.

Triana became a political football. By the time it was completed in 2000, Gore was leaving office. Its connection to Gore made the satellite an easy target for Republicans who lampooned Triana as an expensive vanity project. NASA scientists were repeatedly summoned to the Hill to defend the mission, Asrar recalled. The project was panned as “GoreSat” by opponents.

Its launch was delayed until the first year of the Bush administration. The plan was that the space shuttle Columbia would launch the satellite from its cargo bay. But Columbia’s schedule was fully booked carrying equipment to build the International Space Station, and that took priority. Triana was put in storage until Columbia had room to carry the satellite. When the Columbia disintegrated reentering Earth’s atmosphere in 2003, the tragedy was the final nail in the coffin for Triana, and “all hope was lost,” Asrar said.

“The science of the mission had become so meritorious, so exciting. I could see the potential educational aspect. We could never get over the political discussion,” he said. “I really do consider this a huge missed opportunity for our country.” 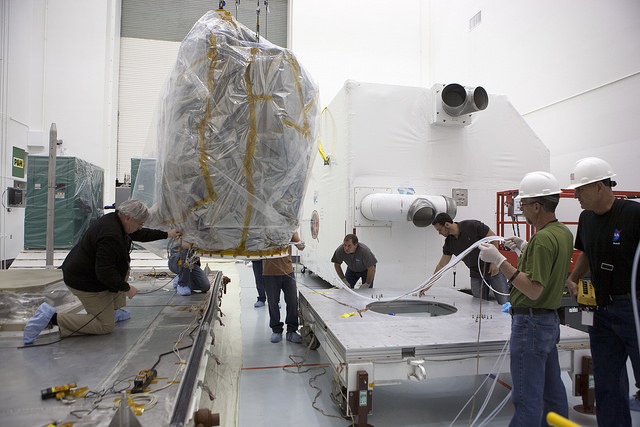 NOAA’s Deep Space Climate Observatory spacecraft, or DSCOVR, comes out of storage more than a decade after the originally mission was put on hold. Photo by: NASA/Kim Shiflett

In 2012, the satellite reemerged as DSCOVR. Scientists have spent the past two years testing the equipment. That meant taking apart the satellite from top to bottom and checking every circuit, updating the electronics and replacing batteries, Szabo said. Even so, it’s possible the satellite could still have problems after a decade in storage, Asrar cautioned.

DSCOVR will still carry out its Earth-observing missions, Biesecker said, but its primary objective now is to measure the magnetic fields that radiate from solar storms. When magnetic fields from solar eruptions collide with the Earth, they can disrupt communication systems and overwhelm power grids, causing damage to equipment. Like a weather forecaster, it’s up to the Space Weather Prediction Center to warn people in time. The ACE satellite, which was near the end of its life in 1998, delivered poor data to space weather forecasters in 10 of the last 44 major geomagnetic storms, Biesecker said, and they hope that with DSCOVR, they can deliver better warnings faster.

“We need to measure magnetic fields so we can tell customers this is how big the storm is going to be and when this storm will be coming,” he said.

At the end of the month, SpaceX’s Falcon 9 rocket will launch DSCOVR into space. For Szabo, who has worked on the project since its beginning, the launch will be the realization of 17 years of hard work.

“I’m elated. We really put lots of effort into it. It wasn’t a throwaway,” he said. “It’s wonderful to see that it will see space after all.”

Left: The Deep Space Climate Observatory satellite is scheduled to launch on January 29, 2015. It will orbit between the Earth and the Sun a million miles away, monitoring space weather and taking images of the Earth. Image courtesy NOAA.

12-year sentence for having a phone in jail is ‘failure,’ Mississippi justice says

See all the new impeachment evidence relating to Lev Parnas

Who is Russia’s new PM? A career bureaucrat with no political aims

1st malaria vaccine tried out in babies in 3 African nations