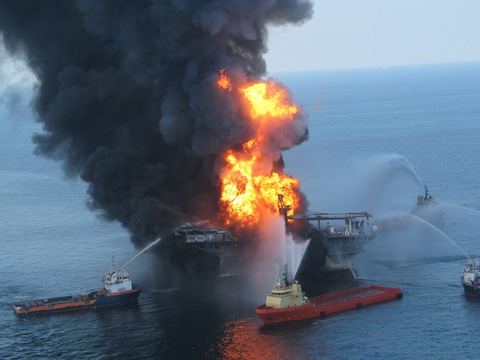 A government report out Wednesday finds that British oil giant BP bears the lion’s share of blame for the 2010 explosion of the Deepwater Horizon oil rig in the Gulf of Mexico. The blast killed 11 workers and led to the worst offshore oil spill in U.S. history.

The new report represents months of investigation by the offshore drilling industry’s chief regulator: the Bureau of Ocean Energy Management, Regulation and Enforcement and the U.S. Coast Guard. It concluded that while BP’s contractors — Transocean and Halliburton — also fell significantly short on safety and diligence, “BP, as the designated operator under BOEMRE regulations, was ultimately responsible for conducting operations in a way that ensured safety and protection of personnel, equipment, and natural resources, and the environment.”

Among the company’s shortcomings, according to the report, was a series of decisions by BP in the days leading up to the explosion “that complicated cementing operations, added incremental risk, and may have contributed to the ultimate failure of the cement job.” It was the failure of a cement barrier at the bottom of the well casing, or pipe, the report found, that was “the central cause of the blowout.” Though the report states that the “precise reasons” for the cement failure could not be determined, “BP’s cost or time saving decisions without considering contingencies and mitigation were contributing causes of the blowout.”

Transocean, which owned the rig itself, and BP, which owned the well, have both produced their own reports. Both companies, along with Halliburton, the contractor that performed cementing operations, have traded accusations of blame for months. Wednesday’s report cited communications failures and an “overall complacency” aboard the rig that may have contributed to crew members failing to either recognize the scope of the crisis or to shut down operations as it unfolded.

The report also recommended dozens of changes to safety practices in the industry, including strengthening of the blowout preventer, a valve apparatus that sits atop the well on the ocean floor that is meant to be a fail-safe switch in the event that a crew loses control of a well. The blowout preventer on the Macondo well failed to shut it off, allowing millions of gallons of oil to spill into the Gulf over a period of months. The investigation did not find Transocean’s maintenance of the blowout preventer lacking, but did fault its training of personnel and for ambiguities in its well-control manual.

In addition to the two earlier reports issued by the companies involved in the spill, a presidential panel released the findings of its inquiry in January. But because the current — and final — inquiry was conducted by the Bureau of Ocean Energy Management, the offshore drilling industry’s chief regulator, the results were especially anticipated because the recommendations could have great potential to tangibly change industry operating procedures. Legislators in Washington have pointed to its long-awaited release as the reason Congress has yet to produce legislation to reform industry practices.