We talk a lot about “brain power.” But your stomach might not be getting enough credit.

A new electronic pill, equipped with a Wi-Fi transmitter, can harvest energy from inside a patient’s own stomach to record core body temperature and then beam the information to an external monitor. The prototype can power itself for nearly a week– much longer than current ingestible devices, which are only able to share health data for less than an hour. Indeed, this ingestible device carries the longest-lasting, most potent energy harvester to date.

While you can’t make Skype calls with this Wi-Fi pill, it could yield fresh opportunities for drug delivery or real-time health monitoring from inside organs, said Giovanni Traverso, a gastroenterologist and biomedical engineer at Brigham and Women’s Hospital in Boston who co-led a study of the pill published Monday in Nature Biomedical Engineering.

“It basically transmits the same power level that a lot of Bluetooth devices use.”

Maybe you’re thinking: “What’s the big deal? All the pill does is measure body temperature?” Well, despite our many medical advances, we’re pretty bad at measuring core body temperature. A recent study of 8,600 patients found mouth, armpit or skin thermometer readings did a lousy job of measuring core temperature. Why that matters: A inaccurate core temperature measure can imperil a patient under anesthesia, causing hypothermia, or complicate treatment for a patient with higher risk of developing an infection.

Traverso is a maker of origami-style ingestible devices. The devices fit inside a capsule but unfold when they hit the stomach and deliver drugs for long periods of time before they disintegrate and pass through the body. About two and a half years ago, he and some collaborators wondered if adding a power source to such a device could extend its working lifespan.

“One of the things that we discussed early on was the potential to power systems using the gastric acid,” Traverso said. Ever build a lemon battery in grade school? If so, then you already know how this concept works.

A lemon battery draws power from an electrochemical reaction. Two metal electrodes — typically a zinc rod and a copper penny — are thrust into the fruit. The metals react chemically with the acidic lemon juice and dissolve, creating an imbalance. The zinc behaves like a anode, building up negatively charged electrons. Meanwhile, the copper cathode fills with positively charged ions. Connect a wire between the metals, and the electrons — electricity — will flow between the two.

To make their power-harvesting pill, the team used miniaturized pieces of copper and zinc. “These metals react with the stomach acid and generate electrons to flow in the external circuit,” said Philip Nadeau, an electrical engineer who co-designed the device.

The electrodes were placed on the outside of a silicon capsule the size of an AirPod earbud, which housed all of the sensitive circuits and electronics. The device could harvest 100 to 200 millivolts directly from the stomach juices, a meager amount. So the engineers added an energy storage capacitor to boost the output to 2 to 3 volts.

“We were generating about 15 microwatts, so you would need about six million [of these devices] to power a 100-watt light bulb,” Nadeau said. “But it basically transmits the same power level that a lot of Bluetooth devices use.”

To prove it, Nadeau and the others field tested the device in pigs. Each pill contained the electrodes, a temperature sensor and a Wi-Fi transmitter. The information beamed to a receiver hanging from the ceiling about 10 feet away, but Nadeau suspects the signal could reach as far as 32 feet.

“The device was sending a temperature measurement and a few performance indicators of the system every 12 seconds,” Nadeau said. “So basically it would be almost like a tweet, maybe a bit shorter than a tweet.”

For six days, the gadget tracked core body temperature, as the pill moved through the stomach and intestines of pigs. Until now, similar ingestible devices had only been able to harvest less than an hour’s worth of energy. Another version of the prototype used the harvested energy to deliver a dose of drugs. 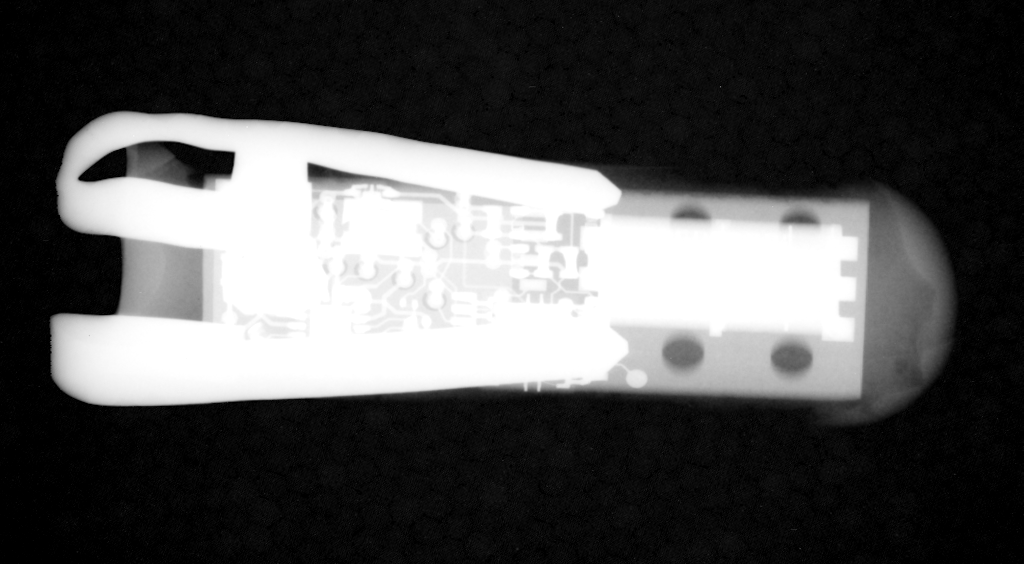 An X-ray scan reveals the circuitry within a electronic pill that can harvest energy and make core body temperature measurements. Photo by Jenny Haupt, Cody Cleveland and Phillip Nadeau

“It’s a pretty nice accomplishment” said John Rogers, a physical chemist at University of Illinois at Urbana-Champaign and leader in medical nanoelectronics design. Rogers wasn’t involved in the study. “Not only were they able to sustain a power for a period of six days, but it was at levels of power that were practically useful.”

In terms of safety, the pigs’ stomachs were exposed only to the zinc and copper electrodes; the silicone capsule encased the rest of the electronics. Zinc is a vitamin, and the amount released as the electrode dissolved was on par with the contents of an over-the-counter zinc supplement. The risks associated with the copper exposure are less clear, Rogers said. The electronic pill has low doses of zinc and copper, but it will need more biocompatibility studies before use by humans.

Traverso and Nadeau said future editions of the pill may swap out copper for a friendlier biomaterial. They’re also aiming to shrink the pill to the size of a tablet.

“When I show it to people they say, ‘I’m not going to swallow that!'” Nadeau said. “Now that we know how much power is available, miniaturization is definitely feasible.”

Traverso thinks temperature tracking is just the first of many ways the medical community can use the device.

“We’ve looked at measuring other vital signs like the heart rate and respiratory rate,” Traverso said. “Systems that could be powered like this and stay in the stomach for a long time could monitor vital signs and diagnose a whole host of respiratory and cardiovascular diseases.”

Left: This new ingestible device can harvest energy from inside a stomach for nearly a week. Photo by Diemut Strebe