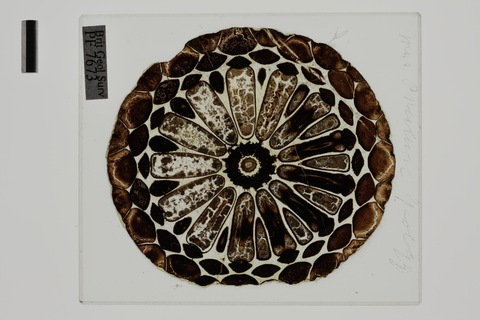 This slide containing the cross section of a monkey-puzzle conifer tree was most likely collected from South America. Photo by British Geological Survey/Natural Environment Research Council.

In April 2011, Howard Falcon-Lang, a paleobotanist, was sifting through old collections in a poorly-lit storeroom at the British Geological Survey, when he reached into a dark cabinet and pulled out a fossil that appeared to be inscribed with Charles Darwin’s name.

The storeroom was windowless and cavernous like an aircraft, Falcon-Lang said, with boxes stacked to the ceiling. The lights in the alcove, where the cabinet was recessed, weren’t working, so he found a flashlight. The first piece he pulled out, a three-inch by one-inch slide of fossilized wood, had the words, “C. Darwin Esq.” scribbled above the fossil.

“My heart was pounding,” recalled Falcon-Lang, who is based at the University of London. “I had a moment to be alone with it for a few minutes. I was going through the drawers, realizing this was a massive, important treasure trove. It was an exciting and precious moment.”

The slide was one of 314 fossils in the collection, some of them collected by Darwin himself on his famed expeditions of the HMS Beagle ship, some by members of his inner circle, including fellow botanists John Henslow and John Hooker.

This slide, believed to have been inscribed by Hooker, contained a tree fossil from the island of Chiloe, which Darwin once described as “a miserable hole.” Other slides from the collection include various samples of petrified wood, seeds from the ancient club moss tree, which is now extinct, and a fossil of a 400-million-year-old giant mushroom. You can see a sample of the slides here:

“What’s remarkable about the whole collection — if you look at Darwin’s slides, Hooker’s slides and Henslow’s slides — it gives you a sense of the reach of Victorian science,” Falcon-Lang said. The fossils, he said, come from Tasmania, Australia, Indonesia, South Africa, and from all over Europe. “In the early Victorian interval, scientists were pulling fossils from all over the world.” In fact, about 20 percent came from missionaries and other scientists, some of whom were stationed in parts of the world where none of the three had ever traveled.

Hooker, whose initials are engraved on most of the slides, arranged the collection in 1836 with Darwin and other associates, Falcon-Lang said. But before he had a chance to number them, he left for a voyage to collect exotic plants in the Himalayas. By the time he returned, the slides were packed up in boxes, and inaccessible.

And so begins the strange journey into obscurity of these valuable fossils, which traveled to two different England museums before landing in their current home at the British Geological Society in Nottingham.

Darwin and colleagues used a technique that involved first cutting the fossils with a rock saw onto a 5-millimeter sheet of rock, then gluing them onto a handmade plate of sheet glass for support. Once the glue had dried, they would grind the fossil further into the plate with a tool called a grinding bench until it reached the thickness of 1/20th of a millimeter — a slice thin enough and translucent enough to work well under a microscope.

“And that’s what these beautiful images are showing: light being passed through these translucent thin sections,” Falcon-Lang said.

David Kohn, director of the Darwin Manuscripts Project at the American Museum of Natural History, believes the specimens on the slides may match a collection of larger specimens being held at other museums.

“What they actually may have found is a near complete set of slides,” Kohn said. “What would excite me is matching the slides with the specimen list, and if possible, the specimens at the Sedgwick Museum in Cambridge or at the Natural History Museum. Falcon-Lang informs me that he has already tried to do this indirectly and has gotten a one-third match. The petrified-wood list at the Natural History Museum gives a new and perhaps better way to test this possibility.”

Gordon Chancellor, a paleontologist and Darwin scholar, said in an email that finding a few specimens of fossil wood from the Beagle voyage isn’t such a big deal, since it was already known that the British Geological Survey had material. “In truth, we know about thousands of Darwin’s specimens, and I very much doubt they’ll provoke any new research and certainly nothing really important regarding the theory of evolution,” he said.

But what this discovery does highlight is that Darwin never ceases to amaze us with the quality, scope and range of material he collected, Chancellor added. “I myself believe that although he did not commit to an evolutionary view until six months or so after the [Beagle] voyage ended, we can certainly see from his notes that he laid the ground for this during the voyage and was pretty sure about it before he got back to England in 1836.”

A next step will be to study the fossils themselves, which have been lost to science for more than 150 years. It also raises the question of what other valuable items are out there, collecting dust.

“Are there collections lying around in drawers that people don’t know about?” said James Doyle of the Department of Evolution and Ecology at the University of California, Davis. “That’s an intriguing thing that passes the mind of paleontologists.”

Correction: An earlier version of this post said that one of the slides discovered at the British Geological Survey may have contained Charles Darwin’s signature. In fact, researchers believe that the slide contains botanist Joseph Hooker’s inscription of Charles Darwin’s name.