Discovering Higgs Boson: the Thrill and Drama of the Waiting Game 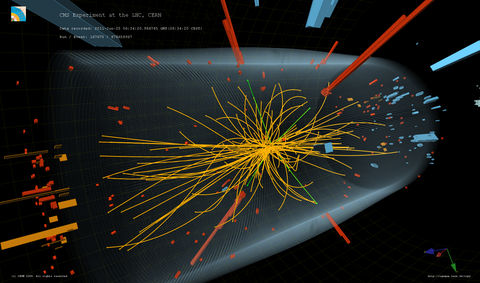 This proton-proton collision event, from the CMS experiment at CERN, shows characteristics expected from the decay of a Higgs boson. Photo by CERN.

Following last week’s major announcement at CERN, I finally had time to sit down and read Dennis Overbye’s long-form feature extravaganza, Chasing the Higgs Boson, published in The New York Times on March 5. If you have time to spare, and you’re looking to brush up on your particle physics, consider this a must-read.

It’s science writing at its best, plus it has everything you’d find in a blockbuster Hollywood hit. Power struggles, blind ambition, high-stakes competition. Marriage proposals, rap videos, sex. (Really, it’s there if you read close enough.) And wonderful narratives. For example, this:

“On the way to fulfill what they thought was their generation’s rendezvous with scientific destiny, the physicists dangled from harnesses in hard hats to construct detectors bigger than apartment buildings in underground caverns. They strung wires and cranked bolts to coax thousand-ton magnets to less than a thousandth of an inch of where they needed to be. They wrote millions of lines of code to calibrate and run devices that would make NASA engineers stand by the track with their hats in their hands in admiration.”

And this on Fabiola Gianott, leader of the Atlas detector, described here as “graceful and strong as piano wire.”

“As the spokeswoman for the Atlas collaboration, Dr. Gianotti, then 46, was the nominal herder of 3,000 putative Einsteins, the orchestrator of a hive mind of brilliance — responsible for getting all the trains to run on time; for all the calibrations and simulations to match; for all the physicists, from the computer analysts who massaged the final data to anyone who ever wielded a screwdriver in the detector cavern, to sign off on the results from those fireball collisions.”

Plus, the story does a terrific job explaining the tricky science, complete with drawings, animations and a “guide for the perplexed.”

The piece covers how the Higgs boson came to be called the “God particle,” and then the “goddamn particle.” How scientists might discover Higgs without ever actually seeing it, how it splits into a cascade of decay particles, which “after trillions of collisions…might accumulate statistically to form a bump on a chart.” How one bump replaced another bump, changing everything.

And finally, it delivers an emotional ending that will get you in the gut if you’ve devoted the time to get there.

*The National Science Foundation is an underwriter of the NewsHour.