A 500-year-old cold case is nearing its conclusion. British scientists have determined with “99.999 percent” accuracy that the remains of King Richard III of England really were lying under a municipal parking lot in the central English city of Leicester. Over the centuries his grave was lost, but in 2012 an ambitious project to find it was launched by the University of Leicester. Incredibly, and in short order, his bones were unearthed at the former site of Greyfriars Abbey, where he was interred after his death in the Battle of Bosworth in 1485. 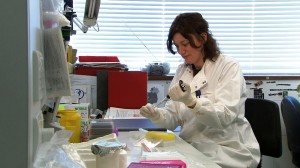 Image from the University of Leicester

Research scientists extracted genetic material and put it through rigorous DNA analysis. Their most recent findings were published in the journal Nature Communications. They compared their samples to DNA collected from living relatives. The tests found a link to a modern-day niece of Richard III, Wendy Duldig who is 18 times removed, and Michael Ibsen, a nephew 16 times removed. It also points to a new mystery of possible infidelity in the family tree. DNA passed down on the maternal side matches these living relatives, but it does not match on the paternal side.

Genetics expert Dr. Turi King led the research effort and said, “Even with our highly conservative analysis, the evidence is overwhelming that these are indeed the remains of King Richard III.” A leading British historian has called the findings into question. Michael Hicks, formerly the head of history at the University of Winchester, said “It tells us that the two modern relatives share the same mitochondrial DNA as the bones, not that the bones belong to Richard III.”

Richard reigned for two years, from 1483 to 1485 and was the last English monarch to die in battle. Researchers determined he was probably killed by a blow to his bare head. Using genetic markers, they also found Richard probably had blond hair and blue eyes.

Watch University of Leicester scientists remove one of the skull’s teeth for DNA analysis here: