Do you have the genetic profile of a morning person?

Being an early bird, or “morningness,” comes naturally to many people. But why?

A new study from the genomics company 23andMe attempts an answer with a genetic survey of nearly 90,000 people. Rather than spot one or two genes, this study highlights a panel of 15 genes and possible associated mutations that may help define what it means to be an early bird.

One strength in this study, as is the general case with 23andMe investigations, comes from its large pool of subjects. Their 1 million customers submit saliva samples of their DNA and also participate in genetic research by filling out online surveys about their lifestyles and behaviors. The result is a catacomb of the human genome — a person’s library of genes — and how it differs among people.

“For each individual, we can measure roughly a million positions across the genome where there is some variation among people,” 23andMe statistical geneticist David Hinds said. “Then there are about another 14 million genetic variants we can infer based on statistics.”

His team can look at close to 15 million positions in people’s DNA to see whether or not mutations or variations in those spots are associated with a particular outward behavior, like depression, obesity or sleep. For this study, published today in Nature Communications, Hinds and his colleagues looked at how the first two of those behaviors relate to the third. 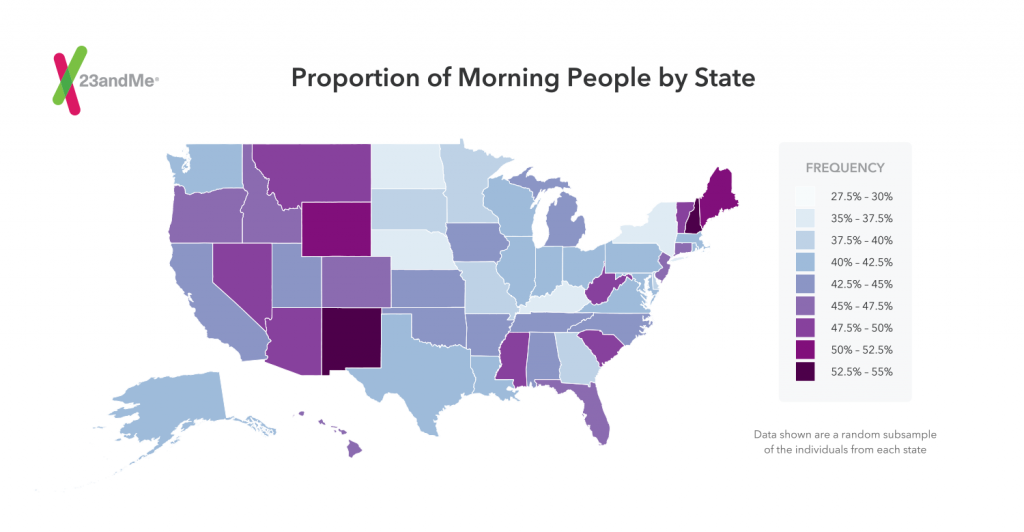 Proportion of morning people by state. Photo by 23andMe

They asked 89,283 customers take two online surveys with a bevy of questions, including whether they were an early bird or a night owl. Computer algorithms sifted through mutations and found 15 genes that are associated with being a morning person.

Seven genes involved a usual suspect: circadian rhythms, otherwise known as the machinery that regulates your alertness during the day. Another four genes had loose ties to circadian cycles — for example, the APH1A gene. This gene controls the production of a protein responsible for the creation of beta-amyloid, the malevolent agent behind Alzheimer’s disease. This finding doesn’t immediately tie APH1A to the aging disorder, but it may offer clues into why sleep loss precedes the onset of Alzheimer’s disease.

Night owls were more likely to sweat in the their sleep, according to a study by 23andMe.The final four genes didn’t have overt ties to sleep cycles, but together, these 15 genes form an early bird profile of genetic traits.

“This study provides evidence that there is a strong genetic part in your preference to mornings or nights,” said Youna Hu, who recently moved from 23andMe to Amazon’s A9 project.

But does this morningness profile predispose a person toward other quirks?

In their surveys, 23andMe uncovered a few patterns in human behavior connected to waking early. Night owls were more likely to sweat in the their sleep (31.7 versus 27.1 percent of respective totals) and to have insomnia (39.7 versus percent 20.9 of respective totals). As found previously in other studies, men were more likely to stay up late, older people preferred morning lifestyles and night owls tended to have elevated rates of depression and a higher body mass index.

The team took a closer look at whether their 15 morningness traits played a causal role in depression and BMI, using a statistical method called Mendelian randomization, but they couldn’t prove one triggered the other. They did, however, spot a link between morningness and the FTO gene, which has been connected to obesity in past studies.

The study has some caveats. For one, people aren’t always truthful when they self-report on an online survey. Some known circadian genes didn’t relate to morningness or eveningness, which suggests that either these traits don’t play a role in distinguishing the two groups or the study didn’t survey enough people to make the distinction. Also, the results don’t apply to everyone. More than 97 percent of the participants had European ancestry, and cultural differences are known to influence sleep patterns.

But still, Hinds sees these large surveys and genetic catacombs as keys to teasing apart the basis of behavior.

“It’s interesting to see how really large genetic studies have started to cast some light on how our biology influences our preferences and behaviors,” Hinds said. “More of these kinds of findings are going to come out over the next couple years now that this kind of data is available.”