Why domesticated foxes are genetically fascinating (and terrible pets)

Cultures across the globe consider foxes to be incorrigibly wild. In both ancient fables and big-budget movies, these fluffy mammals are depicted as being clever, intelligent and untamable. Untamable, that is, until an unparalleled biology experiment started in Siberia almost 60 years ago.

The tale begins with Dmitry Belyaev, who was studying genetics during a very dangerous time in the Soviet Union. State officials campaigned actively against genetic research with a tactic known as Lysenkoism, under which hundreds of biologists were either thrown in prison or executed. After Joseph Stalin’s death, the government’s grasp on genetic research loosened, and though it was still controversial, Belyaev was finally able to test a hypothesis he had been secretly pursuing. 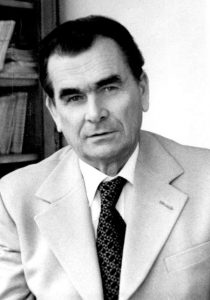 Dmitry Belyaev, the brains behind the breeding. Photo by Institute of Cytology and Genetics

As director of the newly-minted Institute of Cytology and Genetics, Belyaev was curious as to how dogs first became domesticated. He decided that to fully understand the process, he must attempt to replicate the early days of domestication. He picked foxes for the experiment because of their close family ties with dogs (both are canids). His research team visited fur farms across the Soviet Union and purchased the tamest foxes on hand. They figured using the most docile of the wild foxes for their breeding program would hasten the pace of domestication, relative to the thousands of years it took to breed dogs.

To prove the foxes’ friendly demeanor was the result of genetic selection, Belyaev’s team began to breed foxes that showed opposite traits of the tame pups. Instead of being outgoing and excited by encountering people, these foxes were defensive and aggressive. This result showed certain aspects of the fox’s behavior could be tied to genetics and spotted during breeding.

What does the (tame) fox say?

Unfortunately, Belyaev died before seeing the final results. But today, 58 years after the start of the program, there is now a large, sustainable population of domesticated foxes. These animals have no fear of humans, and actively seek out human companionship. The most friendly are known as “elite” foxes.

“By the tenth generation, 18 percent of fox pups were elite; by the 20th, the figure had reached 35 percent,” Lyudmilla Trut, one of the lead researchers at the Institute of Cytology and Genetics, wrote in a paper describing the experiment in 1999. “Today elite foxes make up 70 to 80 percent of our experimentally selected population.”

University of Illinois biologist Anna Kukekova has been studying these domesticated foxes since the late 1990s. Her lab digs into the genes behind the desirable traits in the animals. 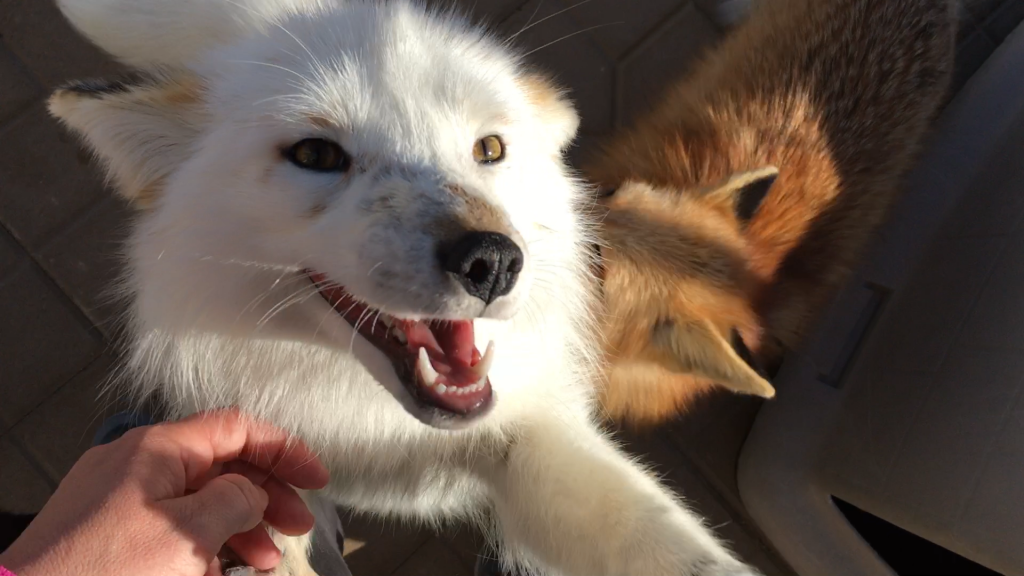 Two domesticated foxes, produced as part of a long-term breeding program in Russia, begging for pets. Photo by Judith A. Bassett Canid Education and Conservation Center

One of the lab’s most interesting findings is that the friendly foxes exhibit physical traits not seen in the wild, such as spots in their fur and curled tails. Their ears show weird traits, too.

Like puppies, young foxes have floppy ears. But the ears of domesticated foxes stay floppier for a longer time after birth, said Jennifer Johnson, a biologist who has worked with Kukekova since the early 2000s.

As the researchers peered into the reasons behind the behavioral traits, they found there isn’t just one gene responsible for the friendly and outgoing behavior.

“The tameness (the nice versus mean) is actually separate from the bold animals versus the shy animals, and the active animals versus quiet animals,” Johnson said. “When these [tame and aggressive] animals are bred, we see a lot of interesting new behaviors.”

Johnson said it has been difficult to decipher these genetic secrets, because unlike for humans and dogs, no one has sequenced the genome of foxes … yet. Kukekova’s lab expects to publish a fox genome sometime soon.

After the collapse of the Soviet Union, the domesticated fox experiment fell on hard times as public funding for the project evaporated. The researchers realized quickly that keeping more than 300 foxes is an expensive enterprise. In the 1990s, the lab switched to selling some of the foxes as fur pelts to sustain the breeding program.

“The current situation is not catastrophic, but not stable at the same time,” Institute of Cytology and Genetics research assistant Anastasiya Kharlamova told BBC Earth last year. Now, the lab’s primary source of revenue is selling the foxes to people and organizations across the globe.

One customer is the Judith A. Bassett Canid Education and Conservation Center, located near San Diego. The center keeps six foxes — five of which are domesticated — as ambassadors for their species, so that people can get an up-close-and-personal view of the animals.

“We have a fox whose name is Boris, and as soon as someone walks in, he’ll run up to them like a dog will,” said David Bassett, president of the Conservation Center. “He wants to be scratched and if you don’t scratch him he’ll make you.” 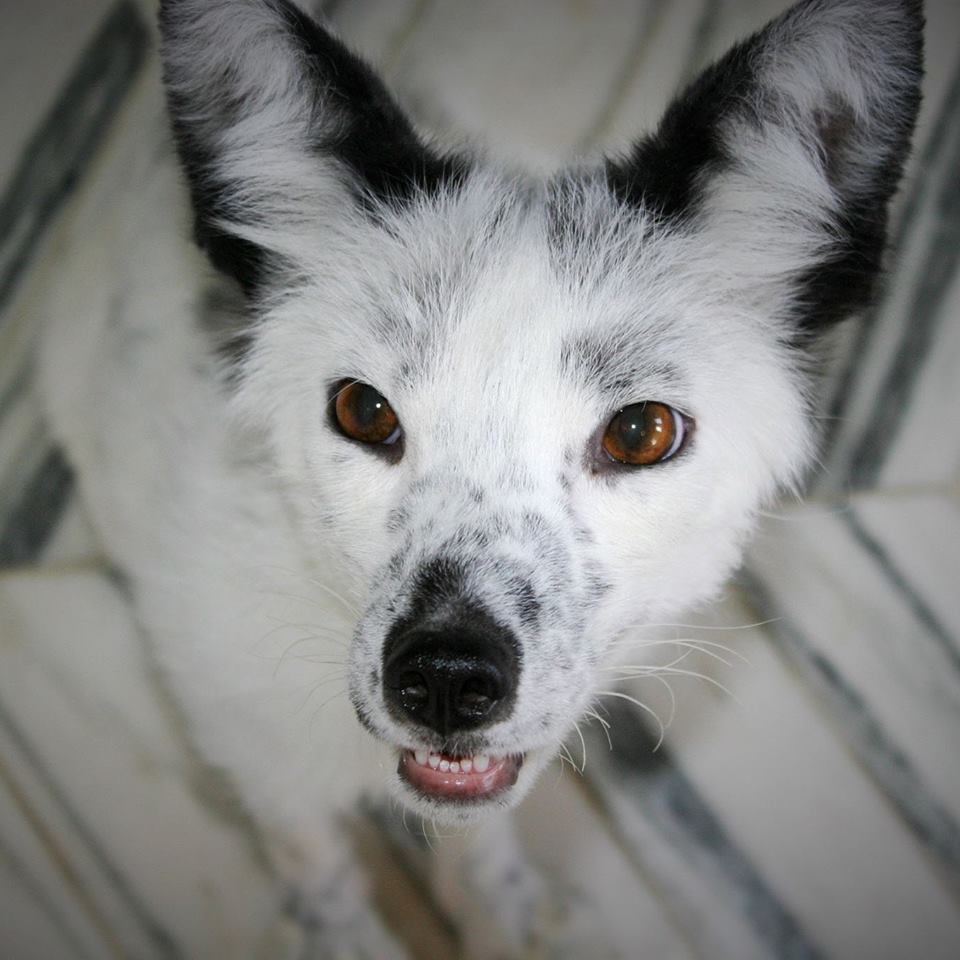 Want a domesticated fox of your own? Remember these rules. First, bringing one into the United States costs almost $9,000. Several states outright ban people from keeping foxes as pets, including California, New York, Texas and Oregon. And of course, while domesticated foxes are friendlier than those in the wild, they can still be unpredictable.

“[You can be] sitting there drinking your cup of coffee and turning your head for a second, and then taking a swig and realizing, ‘Yeah, Boris came up here and peed in my coffee cup,’” said Amy Bassett, the Canid Conservation Center’s founder. “You can easily train and manage behavioral problems in dogs, but there are a lot of behaviors in foxes, regardless of if they’re Russian or U.S., that you will never be able to manage.”

Left: A domesticated fox, produced as part of a long-term breeding program in Russia, being cuddled. Photo by Judith A. Bassett Canid Education and Conservation Center