People often believe the ability to think abstractly is distinctly human, but a new study in mallard ducklings shows otherwise.

The baby fowl can decipher abstract relationships between shapes and colors based on a new discovery from the University of Oxford. But unlike with animals generally thought to be intelligent, such as parrots and monkeys, the ducklings did not require any training to show off this mental talent.

The findings, published today in Science, suggest baby ducks use abstract thought to keep tabs of their moms in tough situations and that the ability might be crucial for a wide array of vertebrate animals.

…this in turn may allow us to jettison the stale canard that thought without language is impossible.

“This project began in 2015, during the middle of last summer,” Oxford cognitive scientist Antone Martinho said, as a means to investigate the foundations of imprinting. Imprinting is a type of early learning, best known in birds, where an offspring becomes behaviorally attached to the first thing that it sees. “It’s what they use exclusively to learn through mothers during the first week of life,” Martinho told the NewsHour.

But his team wondered if this connection relies only on the physicality of an imprinter — a literal picture of a mother “burned” into the brain — or if subtle, non-physical patterns play a role.

To test the idea, they used a same/difference exam. The team used several different conditions, so here is a basic example: An hour after birth, the team put individual ducklings in an arena with a single pair of moving objects of the same shape, for instance, two red pyramids. The objects swung around, like a mobile in a baby’s crib, and imprinted on the ducks. The chicks ultimately followed the pyramids around the arena. 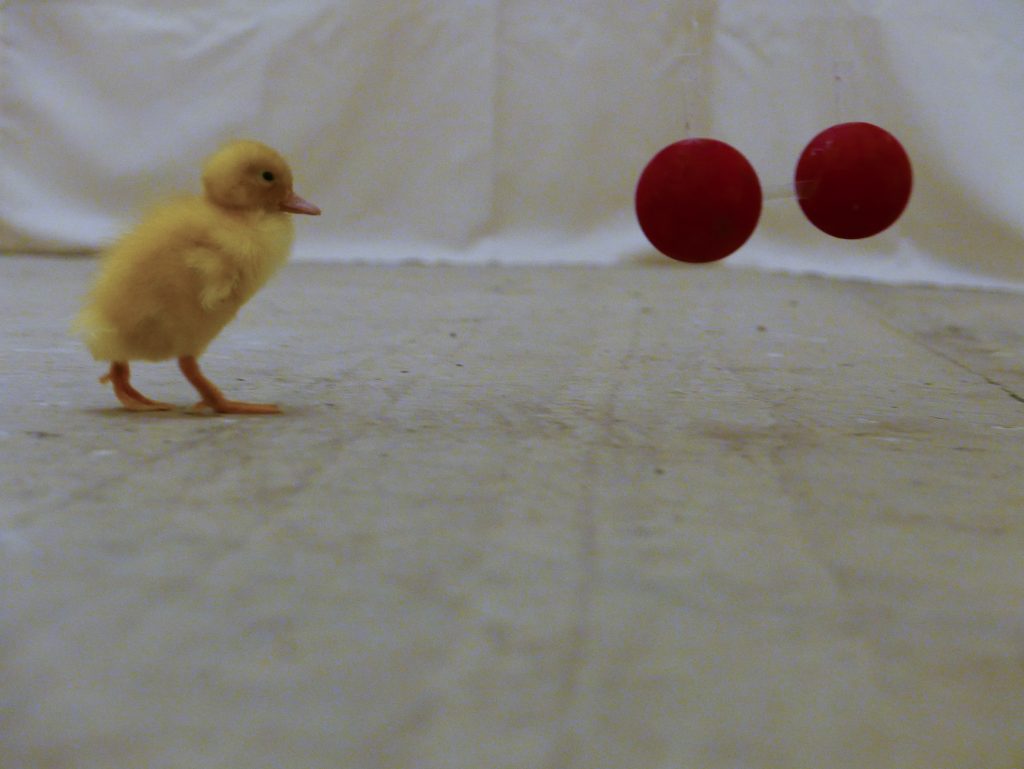 A duckling in the testing arena approaches a stimulus pair composed of “same” shapes. Photo by Antone Martinho

Later, the birds were placed in the same arena, but this time with two fresh pairs of red objects: a pair of spheres or a cone linked to a cylinder. The team watched as the ducklings decided between following the objects that were the same as each other (a pair of cubes) akin to their imprinting stage or the objects that were different (cone-cylinder). Get it: same/difference exam. 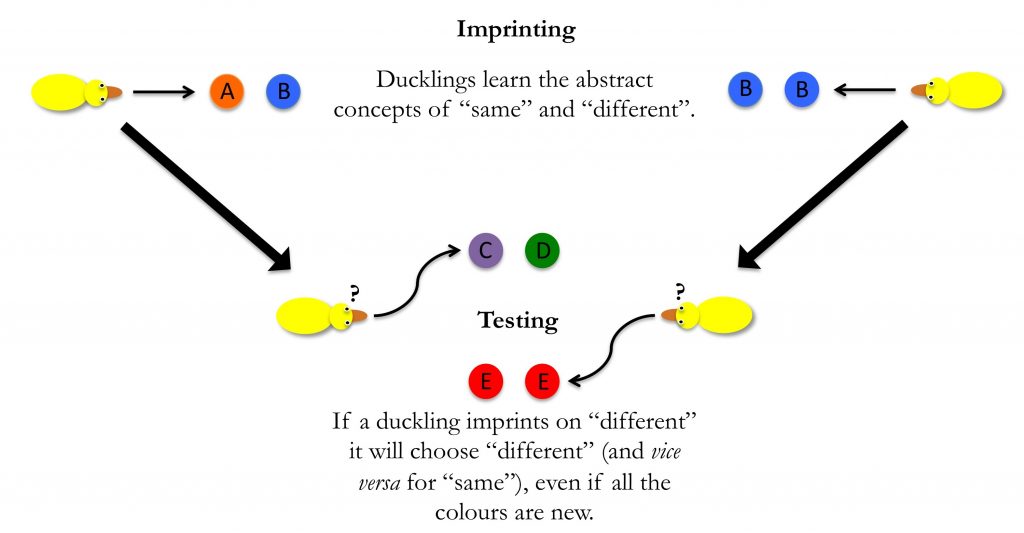 Graphical illustration of the same/difference exam. Illustration by Antone Martinho and Alex Kacelnik

The team found that three-quarters of the ducklings preferred to follow the objects with the same relationship shown during the imprinting stage. This trend held true in the reverse scenario. If ducklings were exposed to two differently shaped objects early on, say cube-sphere, then they would pick contrasting over identical objects in later trials. Plus, the ducklings showed the same pattern when the team tested colors rather than shapes. (The team tested 47 ducklings in the trials with shape discrimination, and 66 in the tests involving color discrimination.)

“The claim that abstract relational thinking is a unique ability of human beings can no longer be supported,” University of Iowa psychologist Edward Wasserman wrote in an accompanying op-ed article.

Wasserman wasn’t involved with the Oxford study, but his lab has found crows demonstrate abstract thinking too. One key difference between the two studies is that Wasserman’s experiments involved rewarding the crows for correct answers. Other studies that have found hints of abstract thoughts in primates, such as baboons and chimpanzees, also utilized rewards. The ducklings did not require compensation — or egging on — to perceive abstract concepts, which Wasserman described as an important finding.

“Although animals may not be able to speak, studying their behavior may be a suitable substitute for assaying their thoughts, and this in turn may allow us to jettison the stale canard that thought without language is impossible,” Wasserman wrote.

Martinho said abstract thoughts might allow the ducklings to find their moms in weird situations.

“The ability to form an abstract understanding of who she is, rather than just a physical image, will mean that you can find her even if she looks slightly different,” Martinho said. “For instance, if she’s standing partway behind a tree or if she dips into a lake and is half blocked by the surface of a water.”

And that necessity is probably true of any animal that needs to identify something. Human babies, for instance, can comprehend same-different abstract relationships as early as seven months.

“Our research and others suggest abstract concepts, as tools for thought, are not a luxury,” Martinho said. “A lot of vertebrates are going to need them if they’re going to have a flexible, robust understanding of the world around them.”

Left: A new Oxford study used pairs of objects to determine that ducklings have abstract thoughts. Photo by Antone Martinho