Why more dust storms and Valley fever are blanketing the Southwest

Giant dust storms are sweeping the southwestern United States more frequently. Why? Rising sea temperatures, according to a study published in the journal of Geophysical Research Letters.

The study also links the rise in dust storms with an 800 percent increase in cases of Valley fever, a rare fungal lung infection.

This cascade of events “could be just a part of a natural variation and nothing to be afraid of, but it also could be something bigger and more permanent,” said Daniel Tong, an atmospheric scientist at George Mason University who led the project.

To draw these connections, Tong’s team developed a new way to analyze dust. They relied on the IMPROVE network of air quality monitoring sites, instituted by the Clean Air Act. These scientific sites were originally developed to monitor aerosols and visibility in national parks by collecting information about air particles, including their size, concentration and chemical composition. The team pulled measurements from 29 of the nation’s 187 sites; for the sake of consistency, they focused on the sites that had collected data for the longest period of time.

Tong and his colleagues from the National Oceanic and Atmospheric Administration were able to distinguish windblown dust from man-made particles, which allowed them to more precisely measure dust storm activity over the last 20 years. The scientists found the frequency of dust storms more than doubled; they counted 20 storms per year in 1990s, compared with 48 storms per year in the 2000s.

Tong and his associates, based on data from Arizona health agencies and the Centers for Disease Control, found that dust correlated with cases of
Valley fever, a disease caused by inhaling the soil-dwelling fungus Coccidioides. It can trigger flu-like symptoms including fatigue, coughing and shortness of breath.

Overall, from 2000 to 2011, the infection rate of Valley fever in the Southwest has increased more than 800 percent, the study found.

Despite what the name suggests, it’s not just “dust” that gets blown around in these storms, said William Sprigg, the director of the Pan American Center for the World Meteorological Organization’s Sand and Dust Storm Warning Advisory and Assessment System. 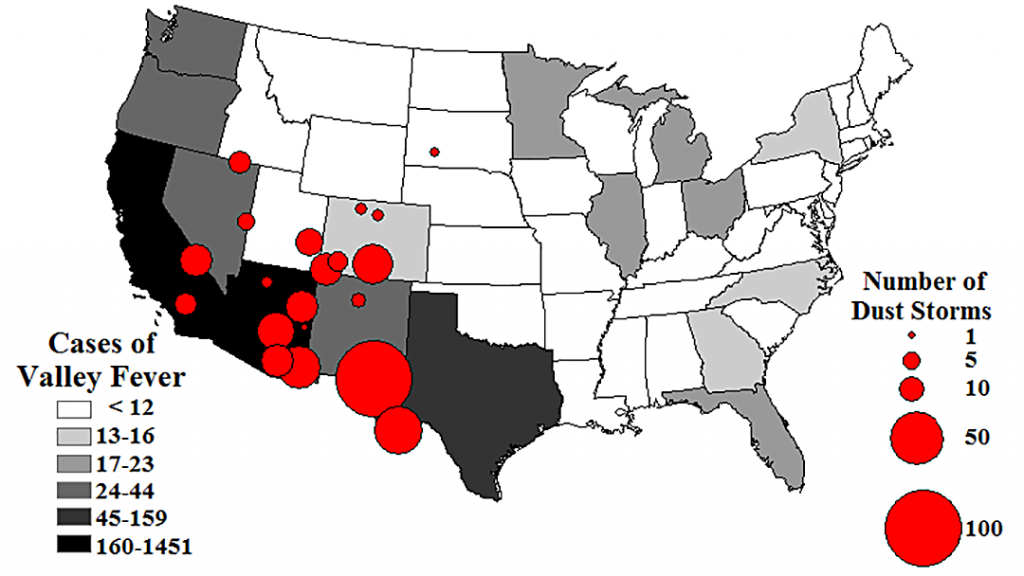 “Whatever is of the right size, in the right place, at the right time, can be part of the ‘dust’ available to be inhaled by someone as remnants of the storm continue on upper air currents,” said Sprigg, who wasn’t involved in the study. That can include potentially hazardous materials such as fungi, pollen, heavy metals, bacteria, stockyard fecal matter, fertilizer, herbicides and pesticides.

What does this have to do with ocean temperature?

“This huge ocean impacts everything including wind speed and precipitation. We found that the changing of the sea surface temperatures in the North Pacific created climate conditions in the Southwest that favor more dust storms,” Tong said. 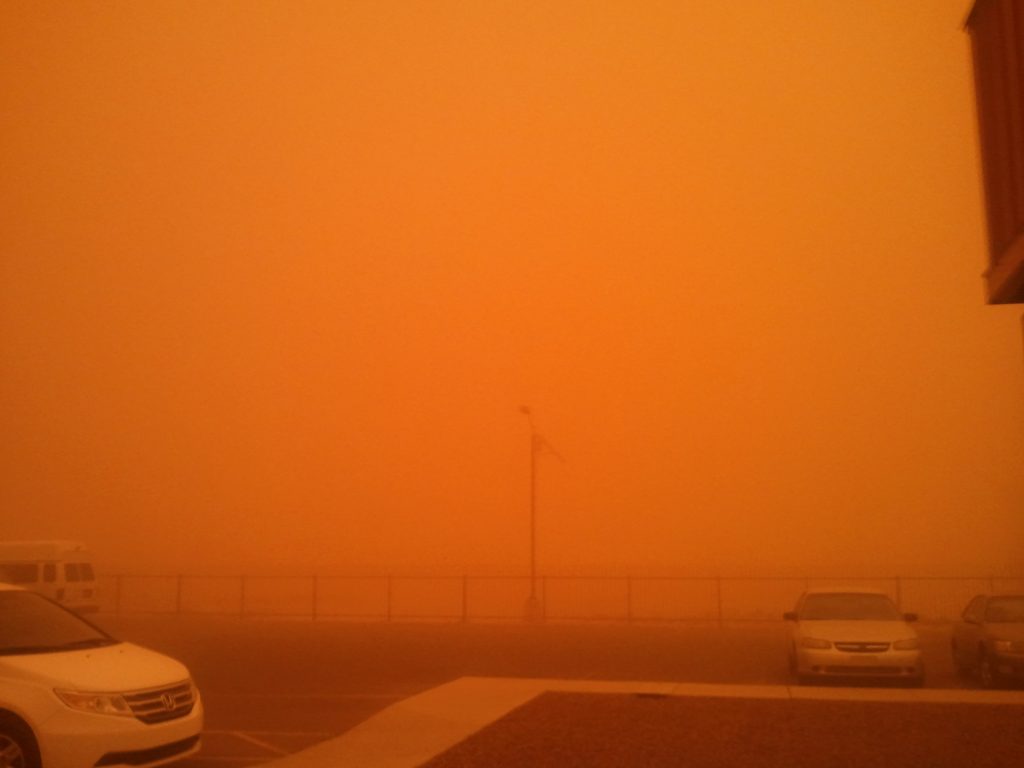 Sacaton, Arizona blanketed by a dust storm on July 5, 2011. Photo by Photo by NOAA/NWS/Grace Watson

The study found the biggest uptick in dust storms correlated with the hottest periods of the Pacific Decadal Oscillation, a warm and cool cycle in the Pacific akin to El Niño and La Niña. As ocean temperatures continue to rise as a result of global warming, the peak oscillations could become more severe, leading to more of those northerly, dry, cool winds into the Southwest, said study co-author Julian Wang, a meteorologist from NOAA’s Air Resources Laboratory. Those winds are also key factors in how wildfires and droughts — also on the rise thanks to global warming — spread.

The relationship between the ocean and dust storms isn’t new. But the partnership is changing in regions around the world. In the Sahara desert, increased rainfall — which has also been linked to higher sea surface temperatures — has dampened dust storms in the Northern Atlantic. Similar climate change-related declines in dust storms have occurred in northern China and South America. The Southwest has seen an opposite trend because of the ocean dynamics outlined by Tong’s crew.

From 2002 to 2006, Sprigg spearheaded a NASA-sponsored effort at the University of Arizona and the University of New Mexico to develop a way to improve dust storm forecasts. The collaborative effort helped improve “dust storm resolution accuracy” — which, among other things, helps predict how dense the storm is and how it will move — from 30 to 45 miles in 1999 to just more than 2 miles in 2014. Sprigg hopes to get that number down to half of a mile.

“The more specific the forecast in time, space and dust concentration the better for epidemiology, health services and public alerts,” Sprigg said. “Detail in forecasts allows greater range and more specific actions for avoiding or protecting against invading windblown dusts.” 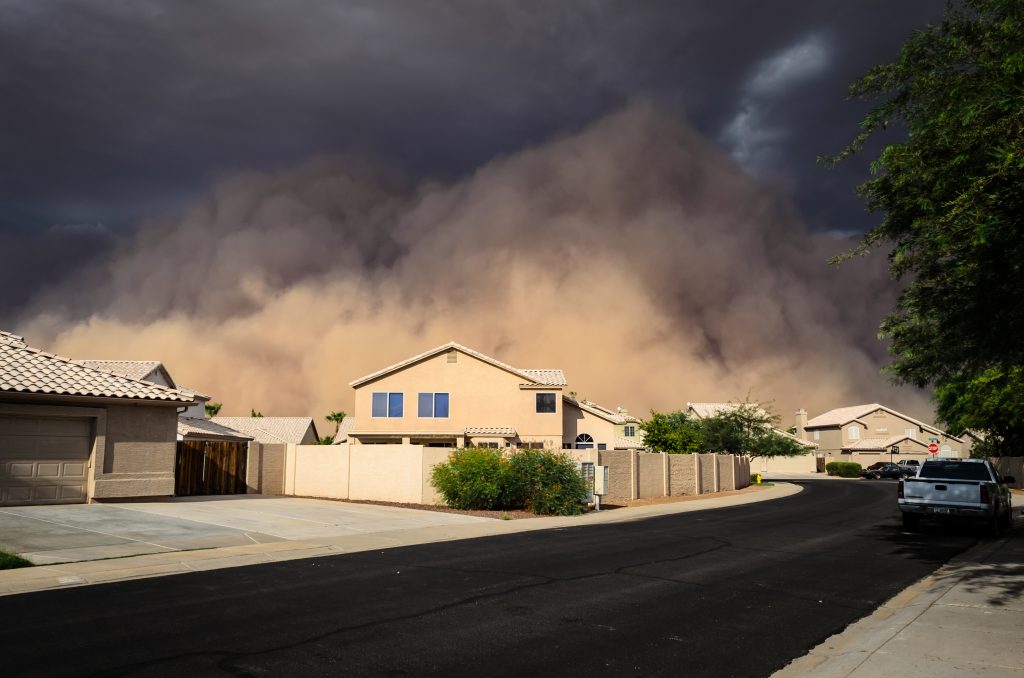 Dust storm in Gilbert, Arizona on July 21, 2012. Photo by Photo by NOAA/NWS/Joseph Plotz

There are also ways to stave off dust storms by improving land management, Jasper Kok, an atmospheric physicist at the University of California-Los Angeles, said.

“Land use decisions can really affect dust storm frequency. Great examples of this in the U.S. are Owens Lake and the Salton Sea in California,” said Kok, who was not involved in the study. “Irrigation can affect the size of lakes in different ways. If the net effect is drying up the lake, then the exposed soil, which is unvegetated and usually contains fine material (as well as toxic fertilizer run-off, in the case of the Salton Sea), can produce substantial amounts of dust. Owens lake was the largest dust source in the U.S. at one point.”

Dust storms can be dangerous over long distances, especially once caught in air streams.

“At least one case has been documented where Valley fever spores from California infected people in Oregon,” Sprigg said. 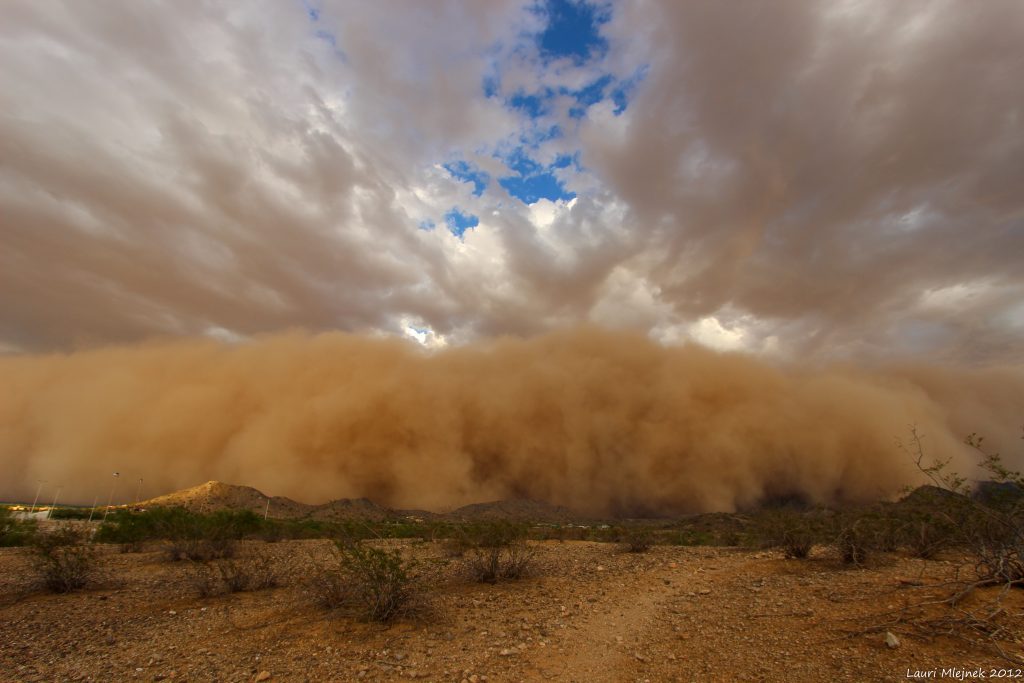 Dust storm in Goodyear, Arizona on July 21, 2012. Photo by Photo by NOAA/NWS/Lauri Mlejnek

All of this said, dust storms can be beneficial in certain ways, too. They can spread important nutrients like iron to phytoplankton in the ocean, fertilize ecosystems and potentially help cool a region’s climate. But in general, when it comes to humans, dust storms do more harm than good. Fine machinery, manufacturers, highways, air traffic controllers, farmers, solar generation companies and freshwater resources would all be negatively affected by a continuing trend of increasing dust storm activity in the Southwest.

“We hope to collect more data from the ground and from satellites to figure this out,” Tong said.