Hydraulic fracturing drives earthquakes in western Canada, according to research published Thursday in Science. The results defy the often-touted belief that the disposal of wastewater is the sole source of man-made earthquakes with fossil fuel extraction technique.

The small earthquakes “were always during or right after fracking, and they’re also confined to a limited area,” University of Calgary geophysicist, and co-author of the research paper David Eaton told NewsHour. Before fracking, the sparsely populated area in Alberta, Canada did not have a history of seismic activity.

Hydraulic fracturing involves drilling a long steel pipe — a vertical wellbore — into the earth until it hits the ground layer containing oil or natural gas. The wellbore then turns and extends horizontally, before “fracking fluid” is pumped through the pipe at high pressure. Fracking fluid, which contains water, salt, sand and additives, cracks the underground rocks to release natural gas and oil.

The U.S. Geological Survey has maintained that fracking is not the cause of most induced earthquakes. However, earthquakes have occurred in Oklahoma and nearby states as a result of wastewater disposal. Some hazardous wastewater returns to the surface, so speculators inject back into the ground in deep disposal wells. 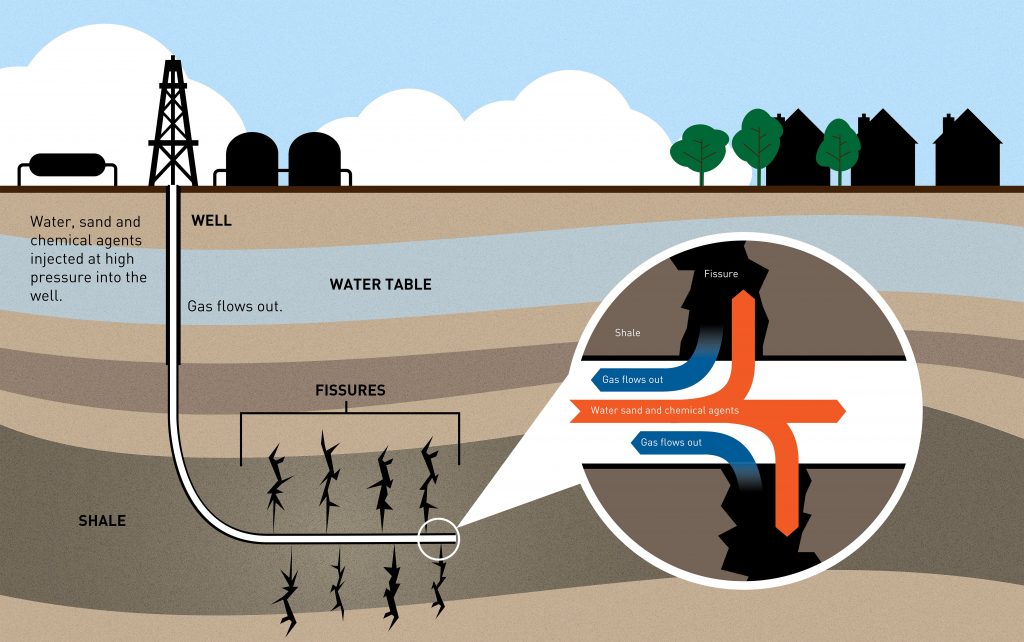 Eaton and his co-author Xuewei Bao demonstrated hydraulic fracturing itself caused earthquakes in western Canada, by adding pressure to tectonic faults. When the pressure builds up enough, the tectonic plates slip. Other studies in Canada, including papers in Geophysical Research Letters and Seismological Research Letters had found correlations between fracking and timing of earthquakes, but Eaton and Bao’s research provides a blueprint for how fracking induces seismic activity.

Most of the tremors studied by Eaton and Bao’s team were too small to cause damage in the sparsely populated area. One incident registered 4.6 magnitude, though it happened after fracking and wastewater disposal had occurred. By comparison, in 2013 and 2014, the Oklahoma Geological Survey and USGS warned the state may see earthquakes as strong as 5.5-magnitude.

So why have Canadian researchers found fracking-related earthquakes, whereas in the U.S. wastewater disposal has been thought to be the culprit?

“I don’t think we have a perfect answer yet,” said Han Kao, a research scientist at the Geological Survey of Canada who wasn’t involved in the study. “One possibility is that the geological setting is different.”

Another possibility is that both actions trigger earthquakes, but some are measured better in one area over another.

“The neat part about this story is that [it demonstrates] that when you inject into the ground and you elevate the pore pressure, the pore pressure can prime a fault, to prime it to slip,” said Kao. Even once a fracking operation has ceased, the pressure remains and can still induce seismic activity.