If you get chikungunya this summer, maybe blame El Niño

Editor’s note: This story is the second of a two-part story on El Niño predictions for 2016. Here is the first part on crops like wheat and cannabis.

Chikungunya virus has spread like wildfire through the Caribbean and Central America. The first cases sprouted in St. Martin in December 2013, and since then, more than 1.3 million have caught the mosquito-borne disease that migrated to our doorstep from Southeast Asia.

There, the disease remains. Only 3,500 cases have been recorded in the U.S., and the overwhelming majority — all but 12 — were carried here from overseas by travelers. An invisible barrier seems to be holding chikungunya at bay, protecting U.S. shores.

But if history is any indicator, El Niño may wash away this barrier. Meanwhile, another related, and potentially more dangerous mosquito-borne virus is knocking at our door: Zika virus.

The El Niño Southern Oscillation (ENSO), an event where warm or cool water in the Pacific Ocean disrupts global weather patterns, has a history of worsening infectious diseases. Take, for example, the Spanish influenza epidemic that ripped through the human population in 1918 and 1919, infecting 1 of every 3 people on the planet and killing up to 50 million people worldwide. A historical investigation by the National Oceanic and Atmospheric Administration in 2010 found that one of the strongest El Niños of the 20th century occurred during the same time frame as the Spanish flu. Another report from researchers at Columbia University tied the cooler phase of ENSO — La Niña — to the emergence of the last three influenza pandemics in 1957, 1968 and 2009.

To understand why, scan the skies. Migratory birds can carry influenza strains like the one behind Spanish flu, and an El Niño/La Niña event can change their flight patterns and behaviors. Droughts, stormy weather and heat shift how the birds migrate and when they take breaks from their long journey.

“That will impact the bugs feeding off the plants and then the bird’s ability to store food before the trip.. Birds become butter balls before a migration. They put on these huge fat deposits and almost double their body mass,” Paxton said.

El Niño appears to stifle this feasting while also creating stormier conditions for air travel. “Without these energy reserves, the birds might not be able to storm through a severe weather event,” Paxton said, which would preferentially hurt birds traveling the furthest.

These shifts also cause the intermixing of birds with different strains of influenza, elevating the chances that two strains swap genetic traits and create a new version of the disease. 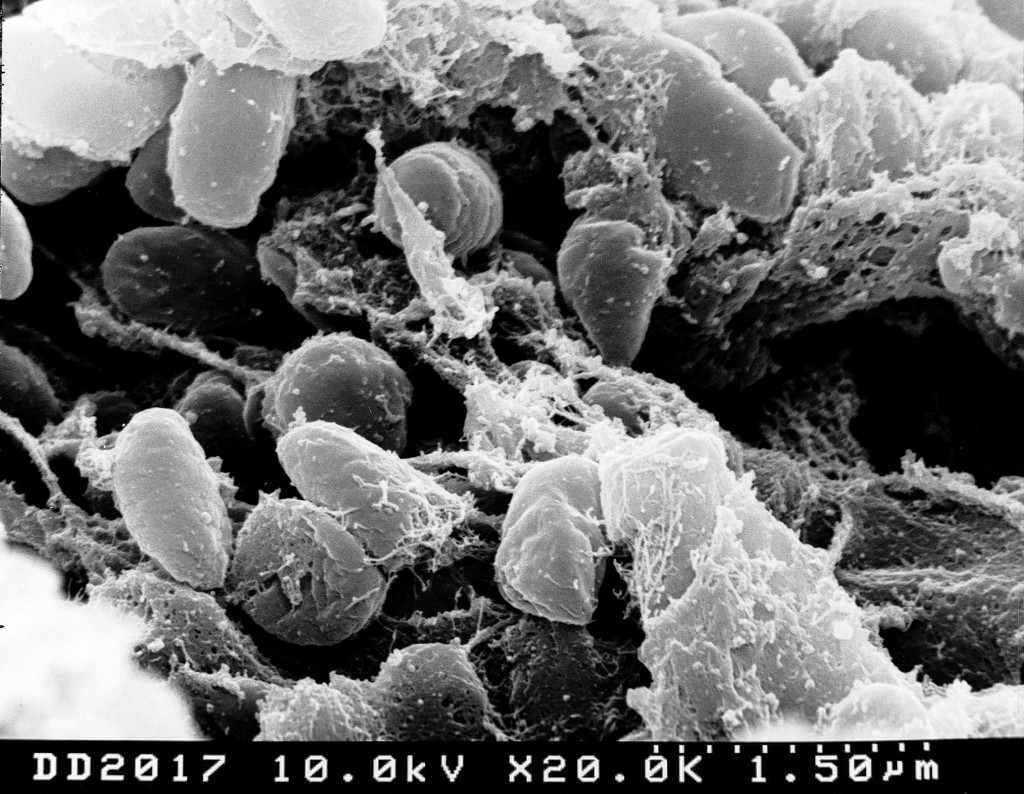 El Niño favors plague (Yersinia pestis) bacteria, which is carried in the guts of fleas. Photo by Media for Medical/UIG via Getty Images

Influenza isn’t alone. Other diseases are boosted by the warm phase of El Niño/La Niña events, and vector-borne disease epidemiologist Heidi Brown at the University of Arizona says one of the best studied examples is the plague, otherwise known as the bacterium Yersinia pestis.

Long-term studies of human and animal plague in the U.S. show that “warmer and wetter conditions lead to increased rates of plague,” Brown said. Plague cases in New Mexico, for example, increase after ENSO events drop extra rain in an area during the winter and spring, akin to what’s expected this year. The Southwest has experienced the same relationship with hantavirus, which, like the plague, is carried by rodents and fleas.

“The 1992 El Niño event was followed by numerous hantavirus pulmonary syndrome cases in 1993, and the 1998 episode was followed by increased human disease in 1999,” Brown said. The rationale is mild temperatures and above average rain keep rodents alive through the harsh winter, increasing rodent populations and the chances that these diseases will transmit into humans.

There are already signs suggesting that mosquito-borne diseases in the U.S. — like dengue and West Nile — may see a boost next year too, though catching these conditions will depend on a number of factors, Brown said. Among them, the duration and size of mosquito season. 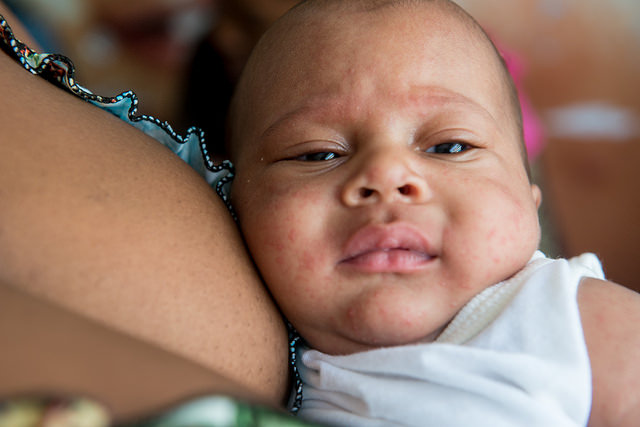 “Mosquitoes aren’t born infected. Rather they acquire diseases by biting already infected humans or animals. The probability of a mosquito biting an infected host, then surviving long enough to target another person is what we think about,” Brown said. “We had a warm October here [in Arizona] and people were still getting bitten by mosquitoes later into the season when we would expect. That’s where we start to get concerned.”

Dengue and chikungunya are primarily carried by two types of mosquito, Aedes aegypti and Aedes albopictus, while Culex mosquitoes are the preferred transporters of West Nile virus. These mosquitoes exist broadly throughout the Southwest, Southeast and East Coast. If parts of the country witness an early spring in 2016, with mild temperatures and lots of rain, then mosquito eggs will start to emerge sooner than normal. “The earlier that they start, the greater the propensity to build up a larger population for the summer,” Brown said. 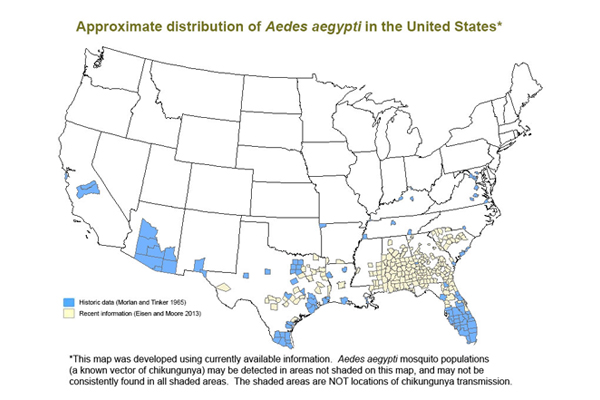 U.S. distribution of the yellow fever mosquito (Aedes aegypti), which can carry dengue, chikungunya and Zika viruses. Photo by the Centers for Disease Control and Prevention 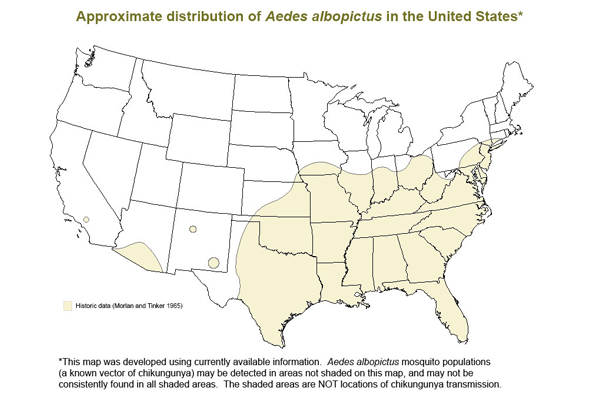 U.S. distribution of the tiger mosquito (Aedes albopictus), which can carry dengue, chikungunya and Zika viruses. Photo by the Centers for Disease Control and Prevention

Does this mean Americans should expect more dengue, West Nile and chikungunya next year because of El Niño?

It’s quite possible, Brown says, but the outcome depends on where you live and if the conditions create the “perfect storm” to establish local transmission. A locally transmitted infection arises when enough people in a community become infected with a disease that it can perpetuate in that region without importing new cases from elsewhere.

El Niño has been known to fuel dengue infections in countries near our borders. Central American nations, like Mexico and Costa Rica, report more cases of dengue following warm and humid El Niño seasons. Puerto Rico too. Mexico’s dengue case count topped 200,000 in November. Hawaii is the midst of a major dengue outbreak, though the connection of this outbreak to El Niño is unresolved, Brown said. Chikungunya lingered at the U.S. border throughout 2015, hitting Mexico with 11,199 cases over the last 13 months. In most instances, chikungunya causes a painful infection on par with a bad case of the flu, but the virus was recently linked to severe brain inflammation, namely in children and the elderly. As many as 45 percent of children diagnosed with this brain inflammation suffer from permanent disabilities.

Given the nature of global travel, having these infections so close to home elevates the odds that they might land in the continental U.S. next year. One early study showed the biggest risk factor for catching chikungunya was proximity to St. Martin, the original site of the outbreak, Brown said. At the same time, El Niño may increase the number of mosquitoes and extend their season of activity, elevating of the chances of a local infection being established.

Compared to dengue, less evidence has been collected about how West Nile and chikungunya might react to El Niño because these diseases are relatively new arrivals in the Western Hemisphere. West Nile is a post-millennial, given it first appeared in New York in 1999. Only two moderate El Niños and two moderate La Niñas have occurred since then, limiting the connections that can be drawn between these ENSO-related weather patterns and West Nile virus.

Added to the list of extremely dangerous mosquito-borne viruses is Zika. This virus originated in Uganda in the 1940s, spread to Asia and didn’t arrive in Latin America until appearing in Chile in February 2014. Just over a year later, Brazil would be suffering a crisis because of the disease’s troubling link to birth defects, namely microcephaly — wherein infants are born with abnormally small brains and heads. 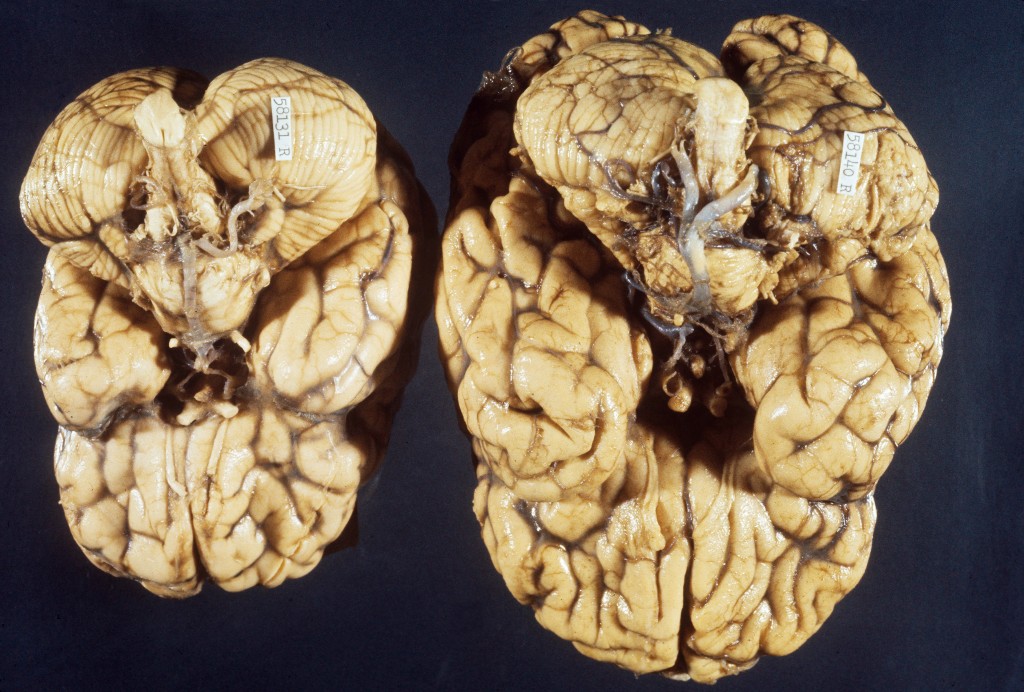 A brain with microcephaly (left) and a normal brain (right) photographed from below. Zika virus has been linked to microcephaly, a neurodevelopmental disorder in which the brain fails to develop normally, resulting in a smaller than normal brain and head. Photo by Martin M Rotker/via Getty Images

“I think that the link between Zika virus infection and microcephaly has become reasonably strong with the detection of viral RNA in several fetuses diagnosed in Brazil,” University of Texas Medical Branch virologist Scott Weaver told GENeS. He continued that an alternative cause cannot be ruled out until Zika infection in mothers is tied to microcephaly without other viruses being present, but he described an alternative explanation as being unlikely.

Before 2015, Brazil was recording fewer than 200 cases of microcephaly per year, but in 2015, this number jumped to nearly 3,000 cases. By October and November, Zika cases cropped up in Colombia, Suriname, Guatemala, El Salvador, Mexico, and as of last week, Puerto Rico.
“If Zika virus is indeed transmitted very efficiently by the Aedes aegypti mosquito as its rapid spread in Latin America suggests, we may soon see local transmission in the southern U.S.,” Weaver said.

Our fate will be dictated by how disease hosts like rodents, fleas and mosquitoes behave, but also important is the behavior of the microbes themselves. Bacteria and viruses have optimal temperatures for maturing and spreading.

For now, the best protection against these diseases is prevention. No vaccines exist for West Nile virus, chikungunya virus or Zika virus. The first vaccine for dengue was greenlighted last month for use in Mexico, The Philippines and Brazil.

“For mosquitoes, the key is source reduction…going into your backyard and making sure that you don’t have places where mosquitoes are growing. Bug spray and screens on windows seem to have a huge effect,” Brown said.

The final wild card in this equation is us. Part of why West Nile plowed through the U.S. in the early 2000s and why chikungunya did the same two years ago in the Caribbean is because the viruses were introduced to a novel population with little previous exposure to the virus, Brown said. Imagine tossing a match into a dry forest.

“ It was most likely a combination of human travel and weather patterns,” Brown said. “It was the right infected person coming into an area, and then enough mosquitoes being exposed that the disease took off.”

Left: The mosquito Aedes aegypti, with its distinctive markings in the form of a lyre, spreads disease like yellow fever and Chikungunya virus. Photo courtesy Centers for Disease Control and Prevention/Wikimedia Commons