Heavy rains are washing away California’s drought, but now a new problem has surfaced for state officials. Engineers are scrambling to address severe damage to a concrete spillway used to release water from Lake Oroville, located about 75 miles north of Sacramento.

On Tuesday, engineers discovered a massive hole in the lower half of the spillway. The gash has since grown to an estimated 300 feet wide, 180 feet long and 40 feet deep, Department of Water Resources (DWR) Spokesperson Doug Carlson told PBS NewsHour. Gushing water has launched chunks of concrete haphazardly and churned the Feather River below into mush, putting millions of steelhead salmon at a downstream hatchery into immediate danger.

This video from a AJ Abell, a reporter at Action News Now, shows the overflowing dam.

Department of Water Resources employees completely halted the water flow Tuesday after they noticed the aberration. Throughout the week, they have attempted to stem the rising reservoir levels by releasing test flows of 20,000 to 65,000 cubic feet per second.

The water further eroded the gated spillway channel, but “not to a point that would compromise the integrity of the dam upstream,” state officials said in a statement Friday. If that level of flow can be maintained, the emergency option will be unnecessary. 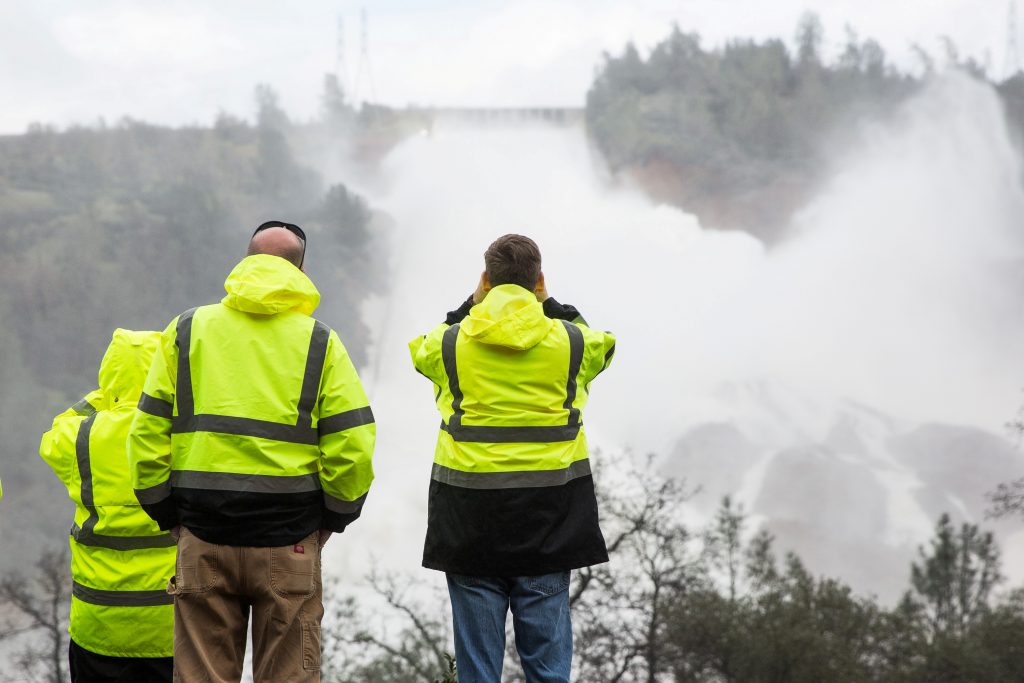 California Department of Water Resources personnel monitor water flowing through a damaged spillway on Feb. 10 at the Oroville Dam in Oroville, California. Photo by REUTERS/Max Whittaker.

State officials said residents of Oroville — located 7 miles east of the dam — were in no imminent danger. But they said more rain could fill the the Oroville reservoir to capacity and cause an overflow by Saturday.

A never-before-used emergency spillway, located down an adjacent hillside, is one possible solution if the reservoir overflows, but Carlson said this option isn’t ideal.
The San Francisco Chronicle notes using the emergency spillway could result in severe ecological damage to the surrounding area, namely a state fish hatchery with fragile steelhead salmon eggs. DWR workers have already begun removing trees, rocks and debris from the hillside to prevent additional damage.

Once the reservoir reaches its elevation capacity of 901 feet, the emergency spillway will direct the overflowing water to a diversion pool at the base of the hillside, Carlson said. In January 1997, Lake Oroville came within one foot of needing the emergency channel option.

Carlson added that repairs to the main spillway can’t begin for another few months, after the wet season passes.

Left: Water flows through a damaged spillway on Feb. 10 at the Oroville Dam in Oroville, California. Photo by REUTERS/Max Whittaker.