Two engineers at Binghamton University have developed a collapsible, bacteria-powered battery that uses the ancient Japanese paper folding art of origami, a report in the July issue of Nano Energy announced.

A drop of bacteria-laden liquid acts as a catalyst to power the paper battery, which folds into a square and costs five cents to make, according to its creator.

“Our simple and cheap origami biobattery is expected to be used especially in resource limited regions as a power source for other small devices like biosensors,” Seokheun “Sean” Choi, the battery’s creator and a professor at Binghamton, told PBS NewsHour.

For now, the battery is in the beginning stages of development.

Biobatteries (also known as microbial fuel cells) that generate electricity with the help of fuels like sugar glucose and even urine have been lauded for their ability to provide portable power sources, according to the November 2013 paper “The Future of Energy Bio Battery,” published in the International Journal of Research in Engineering and Technology.

Choi’s creation could be used together with paper biosensors as part of a low-cost diagnostic device. One potential application of such a device is as a cost-effective disease testing kit for use in parts of the world with scant resources.

Biobatteries also have renewable and biodegradable components that forego the heavy metals used in traditional batteries, which can be hazardous to human health and the environment. Stormwater and sewer water fuel Choi’s battery.

Although similar batteries have been written about before in science journals, Shelley D. Minteer, USTAR Professor of Chemistry and Materials Science & Engineering at the University of Utah told PBS NewsHour this was the first report of a paper-based battery using an electrode coated in bacteria to power up.

“It is a creative and interesting design that has broad application for self-powered biosensors,” she said of the new battery created by Choi and his student, Hankeun Lee. 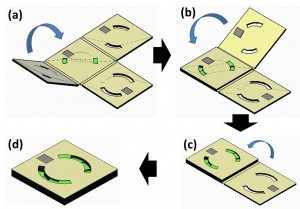 The four steps based on origami principles Choi and Lee used to fold up their biobattery. Image drawn by Jiaqi Zhang

These compact batteries do have their limitations. Since they are powered by living organisms, they must have the ideal conditions to grow and reproduce those organisms, Minteer said. In addition, the batteries have less energy density than chemical batteries as they become diluted by the water being added to them.

“These power sources are not going to be good for replacing grid power (not high enough power density),” Minteer said, “but will be ideal for powering biosensors, sensor networks, etc., where replacing batteries is not always feasible or practical.”

For more than 25 years, scientists have looked beyond the aesthetics of origami and at the math and science behind it to develop solutions to problems in fields like medicine.

Former physicist Robert Lang created a folding telescope, as well as a heart stent by using the design principles of origami. In 1995, scientists used the method to fold and deploy a solar panel array for a Japanese satellite.

Most recently, researchers at MIT created a mini origami robot that builds itself, digs, swims, climbs and carries, and then mostly dissolves when it is done.