Euthanized pets give one last gift

In early July, Robyn Zwolinski and her husband, Gene, decided it was time to put down their 13-year-old West Highland terrier, Blaire. The past couple years had been hard for Blaire: she had lost her sight and had begun to develop cognitive canine dysfunction — a dog’s version of dementia.

The Zwolinskis contacted their vet, Vern Otte of State Line Animal Hospital in Leawood, Kansas, a suburb of Kansas City. Otte had seen them through the euthanization of several pets, and Robyn said they trusted him implicitly. Before coming into the hospital for the procedure, Otte called to ask Robyn a question that took her by surprise.

Otte wanted to know if the Zwolinskis would consent to donating Blaire’s pancreas.

“You know, for a second I remember just kind of catching my breath,” Robyn said. “And then my senses clicked in, and I said, ‘Well, of course.’ …. We’re all organ donors as adults in our household, but, gosh, I never thought about my pet.”

Otte is one of several veterinarians participating in a new Pet Organ Donation Network. The network works with vets at both State Line and Wayside Waifs, an animal shelter and adoption organization in Kansas City, Missouri. The Pet Organ Donation Network is the brainchild of Lisa Stehno-Bittel and Karthik Ramachandran, co-founders and president and vice-president, respectively, of Likarda, a Kansas bioscience firm.

Since the network began accepting donations in January 2013, Otte hasn’t had a single pet owner tell him no. This has led to between 30 and 35 donations for the network.

The research at Likarda is largely focused on changing the treatment of canine and feline diabetes. The research could lead to developments in human diabetes treatment as well, Ramachandran said. The research involves a large number of pancreases, which is where the recently launched Pet Organ Donation Network enters the picture.

In essence, the network works by obtaining viable research organs from pets already scheduled to be euthanized. Currently, organs destined for research are mainly obtained from healthy animals — largely rats and mice — raised in research facilities.

“In a lot of these cases … we purposefully give them diabetes or the rats are purposefully given some sort of injury to replicate a cardiac event,” Ramachandran said. “In all these cases, you may get some general idea of how drugs (affect the disease) … you may be able to answer some questions. But it really doesn’t replicate what happens in humans or even what happens in many other animals.”

“On April 25, Tiny went to puppy heaven. But his pancreas went to Karthik’s company and is going to help find a cure for diabetes for animals and, hopefully, ultimately for humans.”
Cancer research follows a similar pattern: typically, a simulated cancer is created in the research animal. Stehno-Bittel explained how the Pet Organ Donation Network could change that.

“When a dog has to be put down because his health is so bad — because of cancer, let’s say — why couldn’t we take that cancer, give it to the study biologist and have them study that instead of having them give a fake kind of cancer to a mouse or a rat?” Stehno-Bittel said. “We believe you’ll get better results that will better mimic what will happen in humans, and it saves animals from having to be used in research.”

The Pet Organ Donation Network has two goals, Stehno-Bittel said: first, to preserve research animals’ lives and second, to share tissues and organs for transplantation into dogs and cats in need.

Ramachandran and Stehno-Bittel said that the network is the first of its kind in the nation, with the ultimate goal of linking vets and pet owners across the Kansas City metro area. 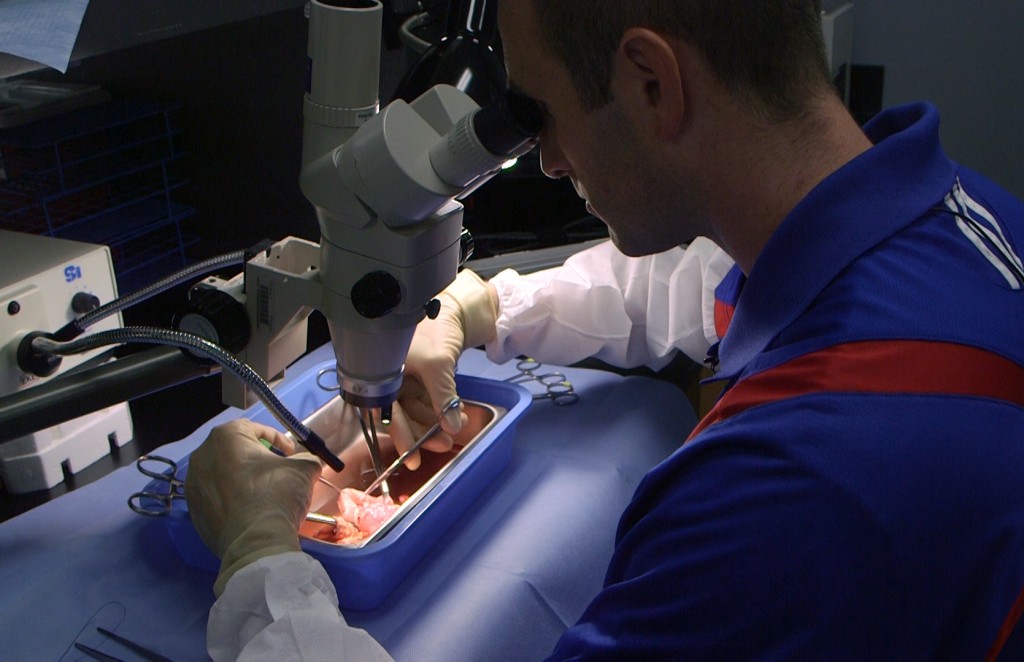 Islets from a donor pancreas were harvested at bioscience firm Likarda in Kansas City, Kansas, last year. The company has started a Pet Organ Donation Network. Photo by KCPT

Currently, the network is restricted to pancreases, which are either used for research or transplanted on a cellular level into animals in need. Different organs and tissues — like hearts and cancerous tissues — will be accepted as the network grows, Ramachandran said.

Overall, organ transplants for pets are rare, said Leah Cohn, a professor of veterinary medicine at the University of Missouri. She said she was aware of three main types: kidney transplants and bone and cornea grafts. Kidney transplants are the most common, but are much more common in cats than dogs. Cohn said that was the case for several reasons, but primarily because dogs are much more likely to reject the organ than cats.

Cost is a major inhibitor in pet organ transplants. Cohn said a kidney transplant for a cat could cost $10,000 to $20,000 for the initial surgery, then $2,000 to $4,000 per year afterward for check-ups and medication. Even the surgery to transplant healthy pancreas cells into a diabetic dog costs between $3,000 and $5,000, Otte said.

Another big inhibitor is the process of obtaining an organ. For example, when a pet needs a kidney transplant, its owners need to adopt the donor cat in addition to incurring all other expenses, Cohn said. The Pet Organ Donation Network attempts to address this issue.

“… if you have an animal that needs a kidney transplant, in order to make that happen, you actually have to adopt another dog as a donor and then keep that dog,” Stehno-Bittel said. “You’d have two dogs with one kidney (each). And yet, animals are being put down daily for a number of different reasons: old age, failing health, sometimes biting or aggressive behavior. Why can’t we build an organ donation network around that?” 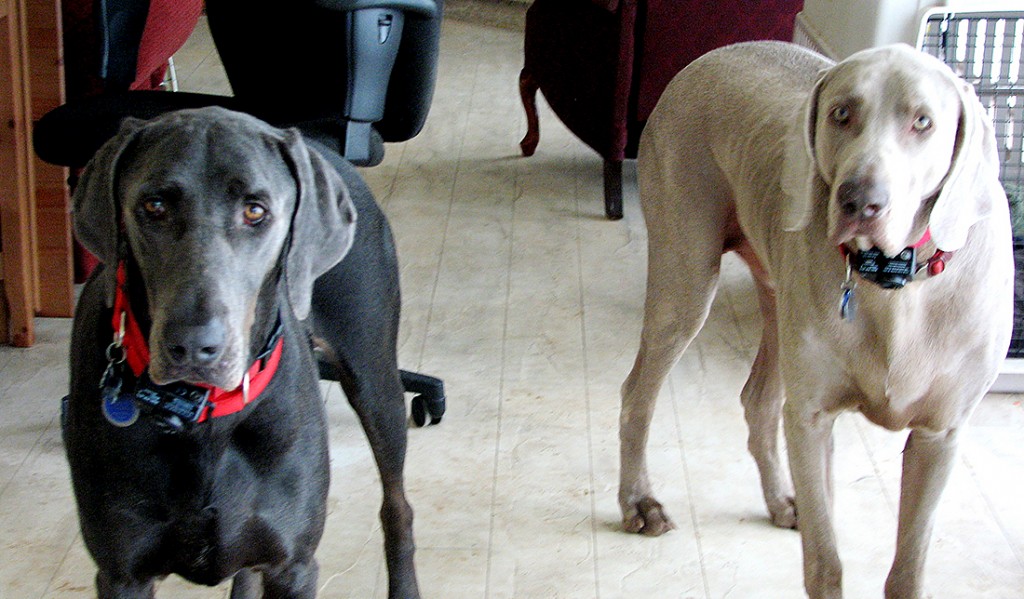 Tiny, left, and his “brother” Tater, at their home outside of Dallas. Tiny was put down because of behavioral issues in April. Photo courtesy of Jan Hawthorne

Jan Hawthorne rescued Tiny, a rare black Weimaraner, in 2008. She and her husband thought that their other Weimaraner, Tater, needed a playmate in the large yard of their Dallas-area home. From nearly the beginning of Tiny’s time with the Hawthornes, it was clear that his hyper-reactive and protective tendencies would be a problem.

Hawthorne said that Tiny reacted so strongly to strangers that she couldn’t have guests in her home and that delivery workers knew better than to get out of their trucks if the dogs were outside without her.

The dog’s behavior was so troublesome that an animal behaviorist recommended putting him down — the first time she had made such a recommendation in 35 years of practice. Hawthorne couldn’t bear to part with one of her “boys,” as she refers to Tiny and Tater.

The last straw, however, came in April.

While on a trip to Louisiana, Tiny attacked Tater in the backseat of the pickup truck.

“Being dogs, they would play fight, but every once in a while, they would really fight,” Hawthorne said. “This was the worst that had ever happened.”

“Is there a place where he could be an organ donor? Is there a veterinarian school that we could take him to that would autopsy him and learn what went wrong? (I searched for) anything I could come up with, and I couldn’t find anything,” she said.

When Hawthorne eventually came across the Pet Organ Donation Network and Likarda through a Google search, she felt relieved. After speaking with Ramachandran, the Hawthornes decided to make the eight-hour drive to State Line Animal Hospital in Leawood, Kansas.

“It’s just not fair that he has to be sent to puppy heaven without something positive,” she said. “On April 25, Tiny went to puppy heaven. But his pancreas went to Karthik’s company and is going to help find a cure for diabetes for animals and, hopefully, ultimately for humans.”

To Hawthorne, finding Ramachandran and his company seemed almost providential. Her husband is diabetic, and so was a dog they had previously owned. It was “meant-to-be,” she said, that Tiny’s pancreas might help cure the same disease.

It was necessary to travel to the Kansas City area because the network currently extends only to the immediate metro region. While the human organ donation network is nationwide, Ramachandran said a network of this scale is unlikely to happen for pets. For one thing, humans can rely on insurance to cover the high cost of helicoptering an organ from another city.

“Building these networks within metropolitan areas can be a much easier option because … it’s a lot more accessible for … pet owners to come into metropolitan centers or even places like veterinary schools where they can donate organs, they can receive transplants,” he said.

In their initial discussions with Ramachandran, the Hawthornes were told they would be responsible for the cost of Tiny’s euthanization and cremation. Upon arriving in Leawood, however, they were told that those costs were covered. Ramachandran said that Likarda and State Line Animal Hospital decided to cover the cost of the procedure because the Hawthornes were the network’s first out-of-state clients.

Hawthorne sees that generosity as yet another sign that they made the right choice for Tiny. She keeps Tiny’s cremated remains on her desk at home.

“It makes me feel good that Tiny’s sitting here on my desk, and even though he has a little piece of him missing, he’s doing so much good,” she said. “He was finally able to be the dog he should have been.”

This story first appeared on Kansas City Public Television’s website. Caitlin Cress is a reporter with The Hale Center for Journalism at KCPT.