Does the buzz of a drone overhead make you nervous? Does it strike fear in your heart? You’re not alone.

The heart rate of a black bear spikes dramatically when drones fly overhead, according to a new study in the journal Current Biology. But these cardiac changes don’t always accompany obvious changes in behavior. This raises the question: could drones could be causing severe distress to wildlife without our knowledge?

Some nature lovers embrace drones. Unmanned aerial vehicles (UAVs) are great for scoping out rare scenes like giraffes strolling across the Serengeti or providing rare views into inaccessible places like an eagle’s nest in a tall redwood tree.

“Drones are being used more and more for research purposes. Ecology, wildlife and geology, anywhere with rugged terrain,” said wildlife biologist Mark Ditmer of the University of Minnesota. “They’re also being used to prevent poaching. If there’s a camera around a rare rhino, a poacher would be less likely to kill it.”

Last year, Ditmer and his colleagues began to study whether the growing popularity of these aerial vehicles could have unintended consequences toward animals. 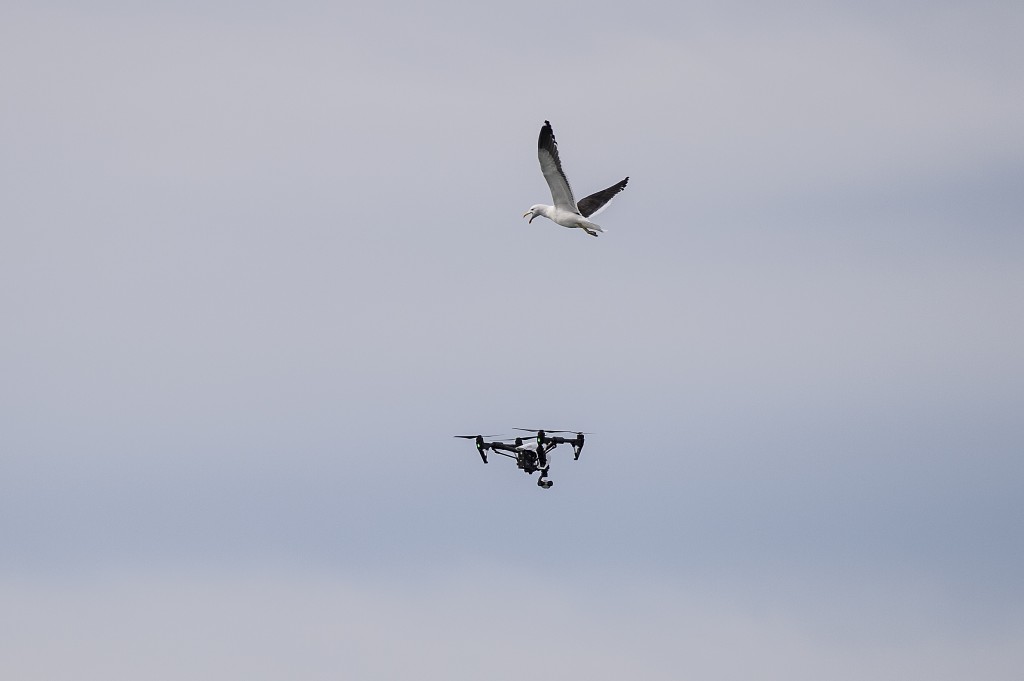 Seagulls attack a drone at the JBay Open on July 14, 2015 in Jeffreys Bay, South Africa. Photo by Kirstin Scholtz/WSL via Getty Images

At the time, the researchers were in the midst of a study on black bear hibernation in northwestern Minnesota. Bears sleep for months during the winter, but then rise in the spring without any serious health consequences. “We wanted to understand how bears are able to take long periods of dormancy, with the idea being that we could then help humans recover from long hospital stays or prep astronauts for lengthy space travel,” Ditmer said.

So Ditmer joined forces with cardiologists at his university and biotech company Meditronic to design a set of heart monitors for black bears. The heart trackers took a reading every two minutes, meaning the team could make 720 estimates of heart rate per day.

The bears were tagged with GPS trackers too, so the team “could see how things influence their heart rate, such as crossing a road or moving across an agricultural field,” Ditmer said. “And then some Ph.D. students thought that it’d be cool if we could track the bears with drones and look at bear behavior.”

Ditmer saw an opportunity to take this even further and study whether the drones caused physical stress to the wildlife. The researchers obtained approval from the Federal Aviation Administration to conduct 18 drone flights over four adult bears — one male and three females. The flyovers occurred sporadically over a three-week period — each lasting five minutes and typically soaring 60 feet above the ground.

The team observed a sharp rise in bear heart rate with every single flyover. In many cases, cardiac pace doubled, and in the most extreme instance, the heart rate for a mother bear with cubs hopped from 41 to 162 beats per minute. Another mother bear experienced a similar incline, suggesting moms are extra sensitive to drone intrusion.

The bears seemed more startled in windy conditions, suggesting that they couldn’t hear the approach of the drones until very late. It took about 10 minutes for bear heart rates to return to normal, though in one case, the bear’s heartbeat didn’t relax for 3.5 hours.

“The incredible change in heart rate is by far the most interesting result of the study,” said University of Wyoming zoologist Jerod Merkle who specializes in bear behavior but wasn’t involved in the study. “An increased heart rate is indicative of bears getting themselves ready for a fight or flight response.”

Merkle says when this happens, an animal’s body is secreting stress hormones, like adrenaline, into the blood, so the animal can act fast if necessary. However, just like with humans, he continues, persistent exposure to stress hormones can be detrimental to health.

The bears didn’t often exhibit fight-or-flight behavior. Only two flyovers caused the bears to dramatically shift their movements. In one case, a bear ran faster than the scientists had ever seen her move at any other time period, Another bear wandered beyond her typical home range, invading another bear’s territory.

“If you completely bolt from an area that you’re used to living in, it could open you up to forms of mortality, whether it’s crossing a bunch of roads or a competitor. In future studies, Ditmer’s team plans to examine if bears in captivity can physically acclimate to drone exposure.

A black bear filmed with a drone, via boxinfreak425 YouTube channel. The footage isn’t affiliated with the study.

“Though the authors only studied four bears, their results are extremely valuable in the context of understanding drone impacts on wildlife and designing appropriate guidelines for future users,” said David Grémillet of the CNRS Centre for Functional and Evolutionary Ecology in Montpellier, France. Grémillet didn’t work on the bear study, but earlier this year, his team showed that drones could be flown within 12 feet of flamingos and common greenshanks without the bird fleeing the scene.

“We demonstrated that drones can be flown very close to sensitive waterbirds without causing a behavioral response, but we called for much caution in the use of drones for wildlife studies and recreational observations on wildlife,” Grémillet said.

Some government agencies are taking notice too. In 2014, the U.S. National Park Service banned all public use of UAVs within park boundaries after a drone scattered a herd of big horn sheep in Zion National Park, separating lambs from their moms. And the Park Service wasn’t kidding around. One violator was reportedly tased and arrested in April for flying a drone in Hawai’i Volcanoes National Park.

“Several ecotourism businesses already decided to ban the use of drones on their tours/cruises, and I am very much in support of this strategy,” Grémillet said.

Ditmer, Grémillet and Merkle aren’t advocating for the complete dismissal of drones from wildlife areas, but merely calling for caution among researchers and ecotourists. UAVs can serve as a boon for documenting intimate views into animal lives, while also protecting endangered species from poachers. But they say that people should use drones that produce less noise or are smaller and less ominous. Merkle also recommends that drones be flown with zoom lenses and the highest elevation possible to keep from disturbing wildlife.

“If you are flying your UAV over a wild animal and feel as if you are not disturbing the animal, you likely are still causing harm via a stress response,” Merkle said. “We must take as many precautions as necessary.

Frederick Douglass statue ripped from base in Rochester park

What to know about the July 15 tax deadline