Even with medical advances, humans may not live past 130, study says

Humans have squeezed almost as much they can out of their natural lifespans and are approaching the biological limit of how long they can extend their years.

So suggests a paper published Wednesday in Nature that argues that the human lifespan appears to be fixed. By analyzing demographic data, the authors write that the number of years any one human can live has a natural cap and is restricted by all the biological time bombs that can take us down.

Even if scientists are able to slow some aspects of aging, they say, there are plenty more that can kill us.

Even if scientists are able to slow some aspects of aging, they say, there are plenty more that can kill us.

“There’s no doubt that these intrinsic aging processes, they limit our lifespan,” said Jan Vijg, an author of the paper and a genetics and aging researcher at Albert Einstein College of Medicine in New York. “There are so many genetic variants that could have a bad effect on you when you’re old. What are you going to do? Develop a drug for all of them?”

The record for longest known lifespan went to a Frenchwoman named Jeanne Calment, who died in 1997 at 122. Based on the analysis, the authors found that the global population would need to be 10,000 times bigger for someone to have a chance of reaching 126 years old in a given year.

The paper will likely fuel the debate over the value of aging research and whether limited funding should be devoted to trying to study something as nebulous as longevity.

“There are some people interested and excited about longevity research, and there are a lot of people who think it’s something we shouldn’t be doing,” said Coleen Murphy, an aging researcher at Princeton who was not involved in the new paper. She said she hoped the takeaway from the paper wouldn’t be the latter.

The hope that we can extend our lifespans comes in part from studies showing it is possible to extend the lifespans of some species. In 1993, for example, researchers discovered a mutation that doubled the lifespan of a worm. Other longevity genes have been found in groups of people who are more likely to live longer than others.

Even though Vijg doubts longevity research will help people live to 130, he said it could uncover treatments for conditions that afflict people in their 60s. He said such work could help more people live better and longer lives generally — a point echoed by aging researchers in defense of their work. 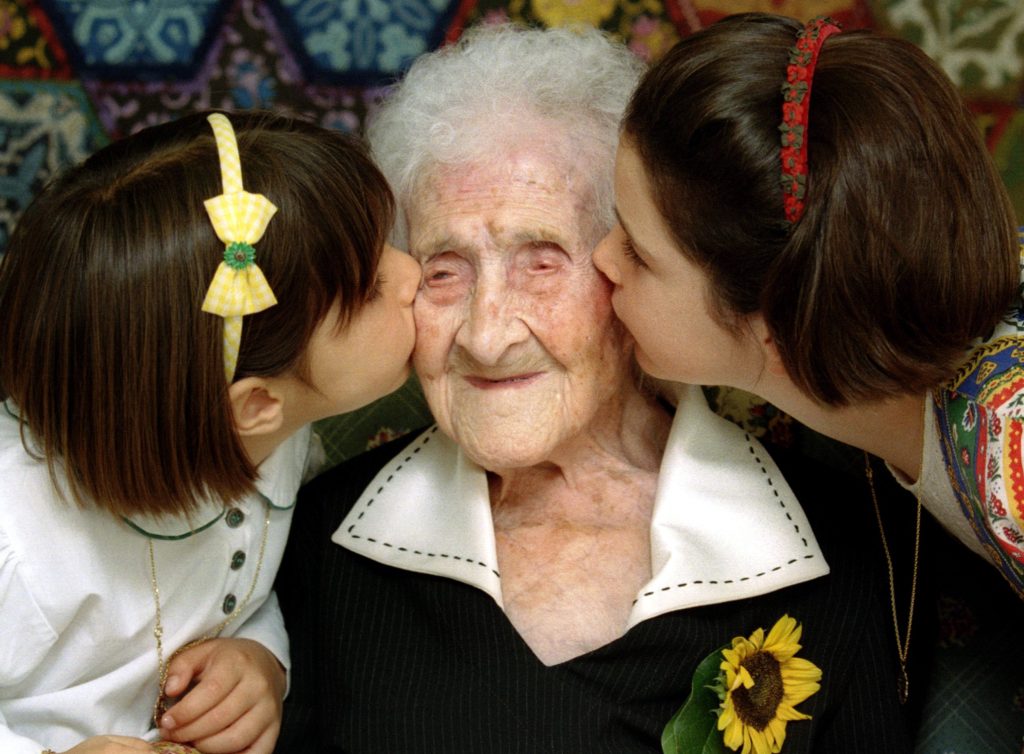 Jeanne Calment, who died in 1997 at 122, lived longer than any person in recorded history. Jean-Paul Pelisser/REUTERS/

Inspired by the buzz around longevity research, a number of companies seeking to delay aging have sprung up in recent years, including Calico (launched by Google) and Craig Venter’s Human Longevity. Major pharmaceutical companies including Novartis and GlaxoSmithKline have also pursued antiaging treatments.

For their analysis, Vijg and his coauthors — Xiao Dong and Brandon Milholland, also of Einstein — looked at data from about 40 countries in the Human Mortality Database, a joint project of the University of California, Berkeley, and the Max Planck Institute for Demographic Research in Rostock, Germany.

They found that while life expectancy — how long people can anticipate living — surged over the past century in developed countries, the rate of change drops after people hit old age. This, the authors write, “points towards diminishing gains in reduction of late-life mortality and a possible limit to human lifespan.”

READ MORE: Can a worm’s lifespan hold the secrets to human aging?

The authors also examined the maximum age of death each year of people in Japan, France, the United Kingdom, and the United States — the countries with the most supercentenarians (people who live to 110). Although the researchers acknowledge they had only limited data, they found the maximum age rose until the mid-1990s and has since declined slightly.

In a separate editorial published in Nature Wednesday, another researcher echoed the findings of the paper, saying that biological underpinnings of aging set different species’ average lifespans. If that’s the case, he said, then “why would anyone think that people could live for much longer than we do now?”

“The crucial question is how much more survival time can be gained through medical technology,” wrote Jay Olshansky of the University of Illinois at Chicago. “With fixed life-history traits, it would seem that we are running up against a formidable barrier.”

Other researchers not involved with the paper said the analysis relied on the best available data, but that it underestimates the potential of scientific discovery.

Murphy said she agreed that there were natural limits to lifespans, but that unnatural limits could exist as well. “It’s not like we’ve tested every drug,” she said.

In a way, researchers say, it can be hard to imagine an area that exists beyond a supposed limit until someone discovers the way to push past it. Before the discovery of antibiotics, many people would have found it impossible to believe people could live as long and as healthily as we do now.

“We don’t know yet what the impact will be of new pharmaceuticals, new technologies,” said David Sinclair, an aging researcher at Harvard Medical School. “The past doesn’t predict the future when it comes to technology.”

Sinclair — who helped start the longevity company CohBar, among other companies — said that discovering the body’s natural repair pathways and rejuvenating them to work like they did when they were younger could change not only how long people live, but how well they live.

“The goal of this research is not to keep people in the nursing home for longer,” he said. “It’s to keep them out of nursing homes for longer.”

Vijg said he doubts that scientists will discover some sort of master regulator that can affect all the age-related processes and diseases that he says constrain our lifespan. But, he said: “Maybe what I now think is impossible may be possible.”

This article is reproduced with permission from STAT. It was first published on Oct. 6, 2016. Find the original story here.

Left: 105-year-old Japanese Hidekichi Miyazaki poses like Jamaica's Usain Bolt in front of an electric board showing his 100-metre record time of 42.22 seconds at an athletic field in Kyoto, Japan, in this photo taken September 23, 2015. Japanese centenarian Hidekichi Miyazaki set a record as the world's oldest competitive sprinter a day after turning 105. Photo by Kyodo/REUTERS