A European Space Agency probe slated to land softly on Mars earlier this week appears to have crash-landed and possibly exploded upon impact instead, scientists announced Friday. ESA lost communication with the Schiaparelli lander soon after it entered the Martian atmosphere on Wednesday.

Signs of the lander were spotted by NASA’s Mars Reconnaissance Orbiter. The photos show a black spot in place of where the lander should have been, measuring roughly 49 feet by 131 feet. The dark patch is believed to be the crash site of the lander, with its parachute located 3,000 feet away.

The ESA stated the problem likely occurred in the last 50 seconds of Schiaparelli’s descent. Landing vehicles on Mars is notoriously difficult, due to the planet’s thin atmosphere, which is roughly one percent of Earth’s. 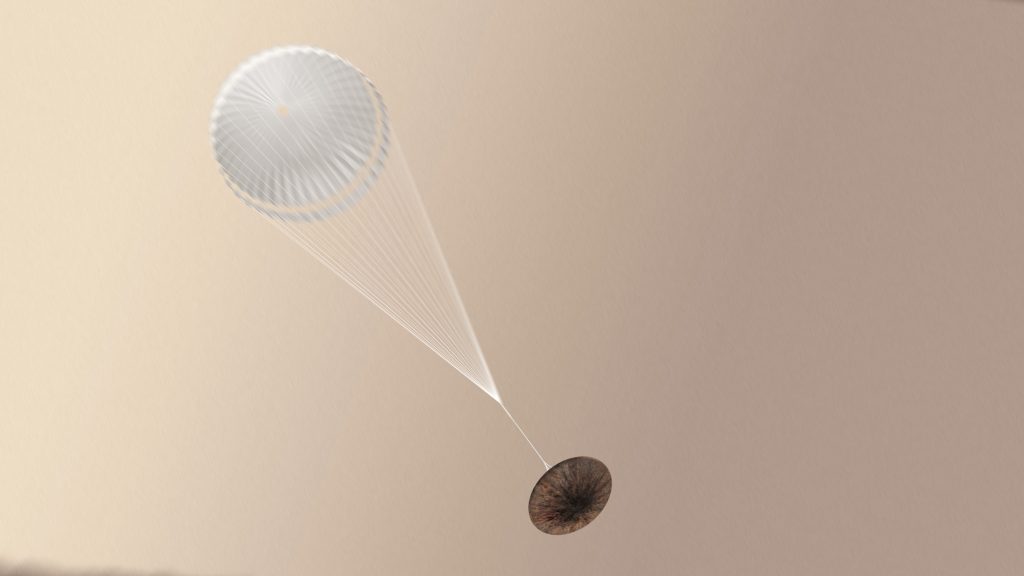 Artist impression of the ExoMars Schiaparelli module after the parachute has been deployed. Photo by European Space Agency/ATG medialab

Schiaparelli was designed to use a parachute during the first part of the descent, and then rocket thrusters at the end to cushion the landing. Mission scientists believe the thrusters failed to fire, causing the lander to hit the ground at a speed greater than 186 miles per hour. They stated rocket fuel tanks aboard the lander were probably still full and likely exploded.

But the ExoMars mission is far from a failure, ESA stated, even with this hiccup. For one, the second half of the project — the Trace Gas Orbiter satellite — is “working very well” and has settled into orbit, the ESA said. It will begin its goal of scanning for signs of life on the planet in March 2018.

Note that the #ExoMars TGO orbiter is the main mission and is successful. Lander #Schiaparelli was only going to be alive a few days anyway. https://t.co/EiquAKNax7

Pus, Schiaparelli transmitted a batch of data before losing contact.

“In terms of the Schiaparelli test module, we have data coming back that allow us to fully understand the steps that did occur, and why the soft landing did not occur,” David Parker, ESA’s Director of human spaceflight and robotic exploration, said Thursday in a statement. “From the engineering standpoint, it’s what we want from a test, and we have extremely valuable data to work with.”

BBC reported that ESA engineers will continue analyzing the probe’s descent. NASA’s Reconnaissance Orbiter will fly over the scene again next week for further insight.

Left: A pair of before-and-after images taken by NASA's Mars Reconnaissance Orbiter on May 29, 2016 and October 20, 2016 show Schiaparelli's landing site. The dark spot (upper left of rectangle) is the ExoMars Schiaparelli lander's crash site, while a faint white spot toward the bottom is the lander's parachute. Photo by NASA/JPL-Caltech/MSSS