Following two days of tweets and public reports of chemical odors in Houston, ExxonMobil disclosed Tuesday that two of its refineries accidentally released 12,000 pounds of hazardous vapors into the air after being damaged by Hurricane Harvey.

But these disclosures from Exxon represent just four of more than a dozen reports of storm-related emissions filed with the Texas Commission on Environmental Quality since Monday that involve chemical companies near Houston. And documents filed with the commission indicate ExxonMobil’s emissions events were far from the largest.

What happened with ExxonMobil: On Sunday, the energy giant shut down operations at its petrochemical facility in Baytown, Texas — the second largest refinery in the U.S. The facility can produce up 560,000 barrels of oil per day, according to the Houston Chronicle.

Pasadena Terminal, a 174-acre facility near the Houston Ship Channel, reported the release of 394,000 pounds of hazardous chemical vapors between Sunday and Monday.

New Republic reported Monday that environmental advocates and residents noticed chemical smells over Houston’s East End district, which borders Harris County’s industrial hub. These reports were not altogether surprising. Chemical plants, refineries and natural gas operations are known to release large quantities of chemicals into the atmosphere when they start up or shut down. Though the U.S. Environmental Protection Agency has acknowledged these “startup, shutdown and malfunction” emissions since 1982, it did not enforce strict regulations for this pollution until 2015, following a petition by the Sierra Club.

During its planned scale down early Sunday morning, Exxon’s Baytown campus recorded a pair (first and second) of controlled emission releases involving a variety of chemicals, from carbon monoxide to benzene to sulfur dioxide. Most of these emissions fell within legal limits. But Harvey’s heavy rains also sank a floating roof on an outdoor tank, prompting a third, unplanned emissions event later that afternoon. 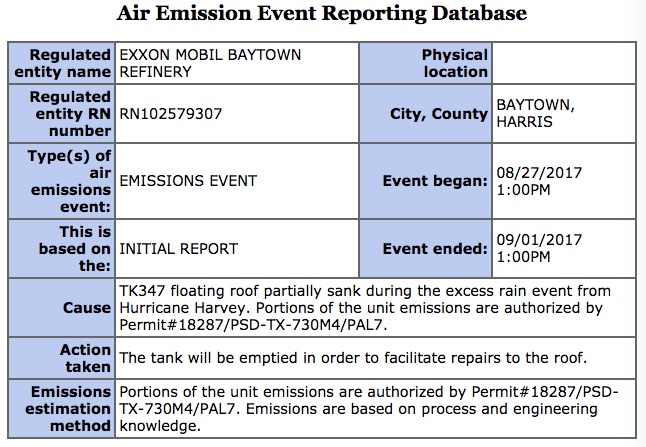 An ExxonMobil regulatory filing about an emissions event at its Baytown facility that released 12,000 pounds of hazardous vapors. Screenshot by NewsHour

What caused Exxon’s leak? Floating roofs are a common design element of petroleum tanks, a way to control and limit how much crude oil is lost to evaporation. The roofs rise and fall as the company fills the tank, meaning rain buildup plus inadequate drainage can cause the roofs to collapse. A 2007 study found these tanks are also prone to buckling and becoming dislodged during hurricanes, due to their thin walls and unsteady foundations.

Leaks from other companies are worse. Pasadena Terminal, a 174-acre facility near the Houston Ship Channel, reported the release of 394,000 pounds of hazardous chemical vapors between Sunday and  Monday — none of which is allowed under the terminal’s permits. The facility, which is operated by Kinder Morgan, is a waypoint for oil pipelines owned by companies like Chevron, Shell and Teppco across Texas. It stores nearly 19 million barrels of petrochemicals. 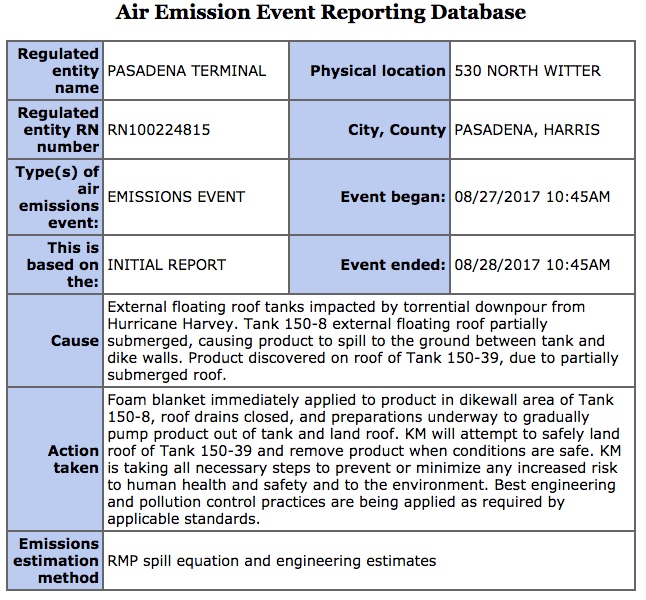 A Kinder Morgan regulatory filing about an emissions event at Pasadena Terminal that released 394,000 pounds of hazardous chemical vapors between Sunday and Monday. Screenshot by NewsHour

Over the course of an hour Sunday night, a separate ExxonMobil facility in Beaumont — 88 miles east of Houston — released 1,300 pounds of sulfur dioxide due to damage caused by Hurricane Harvey. That’s approximately 10 times the amount allowed by the company’s permits. A Shell Oil facility near Houston also reported a small release of chemical vapors due to problems with a floating roof.

The Environmental Defense Fund, an advocacy group, reported that more than 1 million pounds of air pollutants were released by Houston’s petrochemical industry due to Hurricane Harvey.

All of the filings involve initial reports to the Texas Commission on Environmental Quality. The final estimates of these chemical emissions may change.

What happens next An ExxonMobil spokesperson told the Washington Post that the company would assess the situation once the storm abates and it is safe to do so.

In its filing, Pasadena Terminal said it is “taking all necessary steps to prevent or minimize any increased risk to human health and safety and to the environment.”

A Harris County official on Tuesday also warned that buried pipelines could fall victim to scouring and breakage due to fast-moving floodwaters in the Houston Ship Channel.

A spokesperson from the Texas General Land Office, which handles liquid pollution from petrochemical facilities in the Houston area, said its officials will not be able to assess pollutants in the water until the flooding in the area calms down. Texas officials have issued boil water notices for multiple parts of Harris County and for elsewhere in the state.

Hannah Grabenstein contributed to the reporting of this story.

Left: A view of the Exxon Mobil refinery in Baytown, Texas September 15, 2008. Photo by Jessica Rinaldi/REUTERS