If you live long enough, chances are you’ll get cataracts.

Cataracts, a condition in which the lens of the eye becomes cloudy, are linked to nearly half of the world’s cases of blindness, primarily in low-income countries that lack access to surgery. Cataracts also cause vision problems for 94 million people worldwide.

A study released this week shows that a natural chemical, produced in our bodies, can uncloud cataracts. The findings were made in rabbits and dogs, but if they hold true for humans, the chemical could greatly reduce the need for eye surgery to treat the condition, researchers say. But some scientists are skeptical of the finding.

The first signs of cataracts may appear as early as 30 or 40, though vision problems don’t typically start until 60.

“The population burden is huge. Basically everyone gets them by the time that they hit 80 or 90 years old,” said J. Fielding Hejtmancik, a geneticist at the National Institutes of Health who wasn’t involved in the study.

Throughout our lives, cells in the lens of our eyes migrate from the outer region of the lens to the center. As they do this, they stretch. Whole structural portions of the cell, like the nucleus and mitochondria, break down and eventually disappear entirely, clouding our vision in the process. The cells in the outer rim of the lens are young, while the cells in the center you’ve had your whole life. 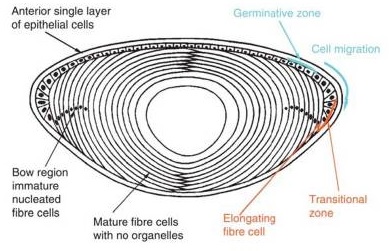 The life of an eye lens. New lens cells, which are modified skin cells, start on the upper rim of the eye’s lens and migrate to its equator. The cells squeeze inwards and then elongate, creating a stack of layers like the innards of an onion. At the same time, the cells ditch their machinery, like its DNA-packed nucleus and mitochondria, in order to keep the lens clear. Courtesy of Moreau K.L. and King J.A.,Trends Mol Med., 2012.

Lens cells are stuffed to the brim with proteins called crystallins. In fact, the protein content in lens cells is greater than any other cell in the body. Even so, the supportive covering of the eye remains transparent, allowing light to project the picture of the world onto our retina. The key to this clarity comes from how the crystallins are arranged. Like open window blinds, the proper orientation lets light through.

Many factors tweak the structure of these proteins over a lifetime, causing them to clump together and obstruct vision.

UV light exposure is one offender; it oxidizes proteins, changing their structure. Some genetic mutations can create these clumps too, leading to cataracts early in life, which is where ophthalmologist Kang Zhang of the University of California, San Diego found a clue for the new treatment.

“By screening families across the world for mutations that affect vision, we found four kids in two families with genetic aberrations in an enzyme called lanosterol synthase,” said Zhang, whose team reported the findings July 22 in Nature.

As its name suggests, this enzyme makes lanosterol — an oily compound found in the skin or in waxy substances like lanolin, a substance used to protect and treat skin. Zhang and his colleagues showed that the mutations shut down that enzyme.

The researchers suspected that the lanosterol prevented the clumping of proteins in the human eye. To test that, they grew lens cells with crystallin clumps in a Petri dish. And indeed, after adding lanosterol to mix, the protein aggregates dissipated. Zhang’s team suspects that lanosterol breaks apart the crystallin clumps like a detergent splits dirt.

Buoyed by this result, the team tested whether eye drops of lanosterol could clear up age-related cataracts in dogs over the course of six weeks. A trained examiner then looked at before and after pictures of the eyes, and scored them based on a veterinary scale for canine cataracts.

“We saw an increase in the lens transparency and also decreased cloudiness of the cataract,” Zhang said, suggesting that lanosterol reversed the course of the disease. And since lanosterol is a naturally-occurring compound in our bodies, the side effects might be minimal in future human trials, he said. 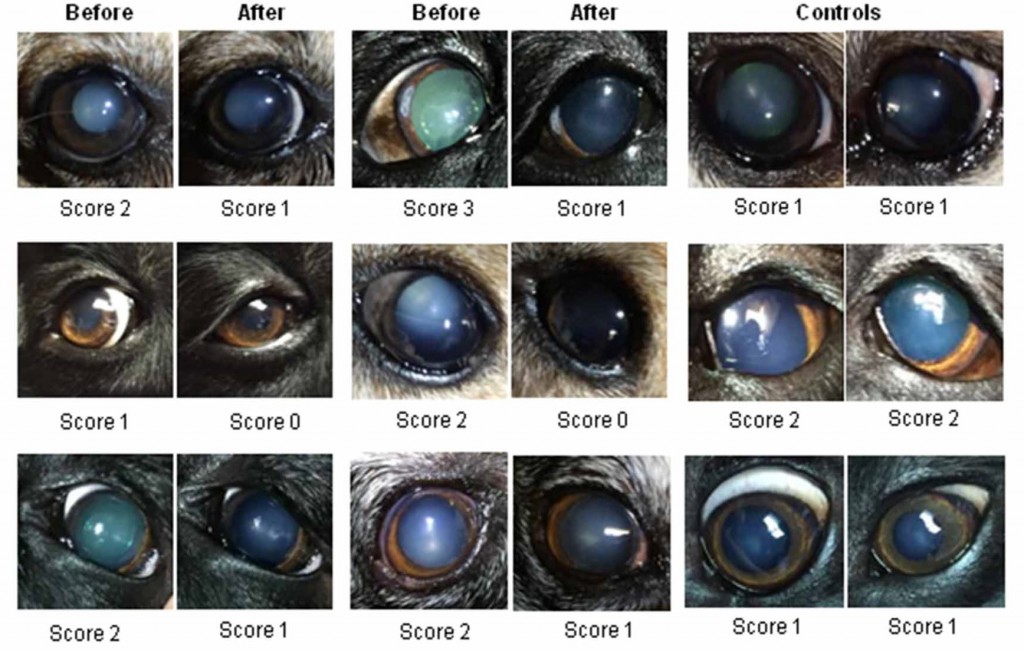 So that’s it…case closed…cure for cataracts found, right? Not so fast. Some outside experts are skeptical.

“It is very difficult to determine conclusively the effect of any reagent, including lanosterol, on cataracts,” said University of Washington biologist John Clark, who is also president of the Association for Research in Vision and Ophthalmology, the world’s largest eye and vision research organization.

Clark points to the fact that the study didn’t directly look at whether the lanosterol deficiency caused crystallin clumps in the four kids with cataracts. Historically, these clumps would be examined if their lenses were removed after surgery, he said, but this study didn’t mention such an investigation.

There is also a chance that lanosterol keeps the membranes of lens cells from rupturing, another contributor to cataracts, Clark said.

“Not all cataracts are the same, and it is not a single disease,” UCLA ophthalmologist Joseph Horowitz said. Some cataracts become extremely hard depending on the stage of the disease, he said. As clumps form over the years, they become tougher to penetrate, and Horowitz questions the compound’s ability to break it down.

Zhang admits that lanosterol needs several more years of study before it’s ready human trials and agreed that the drug likely won’t break hard cataracts. But as all cataracts start as mild to moderate cases, he said, early intervention with lanosterol might stop future clumping.

“We did everything we can do experimentally to show lanosterol can dissolve crystallin protein aggregations in cell cultures, in rabbit and dog cataract lenses, Zhang said. “Obviously, we need to do more and our data need confirmation from other researchers. This is just a beginning.”

Horowitz’s skepticism stems in part from prior natural compounds that have been falsely marketed as cures for cataracts, such as the antioxidant carnosine (or N-acetylcarnosine).

“Carnosine is snake oil,” he said. “It isn’t approved by the FDA. It isn’t approved the Eye Institute. And only one group showed that it could deaggregate lens proteins,” Horowitz said. “But it’s a natural product, so people can buy it in a health store.”

Like Alzheimer’s disease or Parkinson’s disease, cataracts fall into a category of condition where people crave a “magic bullet” that can cure everybody, but Clark says such a drug is unlikely.

“Problems of aging, such as cataracts, are complex and multifactorial. We’re in a time of great optimism where we can quantitatively measure individual human diversity,” Clark said. While the idea of a “magic bullet” may still inspire us, scientifically we need to seize this moment to learn about the myriad nature of biomedical problems of aging, like cataracts, to improve the quality of life of our society, he said.

Hejtmancik agrees, but adds that Zhang’s research advances our understanding: “I view the research as opening a new door and pointing in a new direction in cataract therapy.”

Left: A new study reports a natural compound that can clear up cataracts. Photo by WIN-Initiative/Getty Images.