Why are snowy owls moving so far from their Arctic home? And where can I spot one?

CHATHAM-KENT, Ontario — Our original intention had been to bundle up for a brisk, post-Christmas trek through a provincial park near the family cottage on Lake Erie in southwestern Ontario. Before long and after a chance encounter with a park ranger, that trek turned into an expedition to spot snowy owls. The ranger told us about 20, that’s right 20, of the rare Arctic bird had been seen at a farm across Rondeau Bay. Even for winter, that’s an unusually large sighting. So figuring the odds were good, off we went — past farmers’ frozen fields, past the slowly turning wind turbines that pepper the landscape, a hop, skip and a jump down Lagoon Road toward the bay and before too long, we spotted our owl.

She was perched atop a telephone pole, a prime vantage point for the Arctic immigrant to spot her prey. Why was this owl, and so many others like her, so far from home? 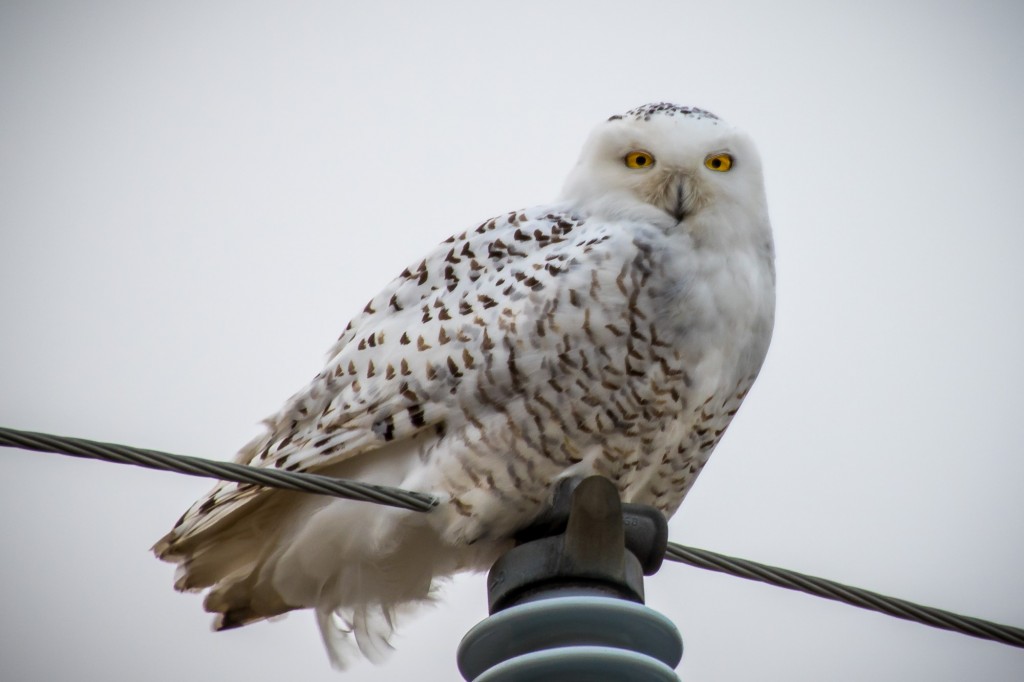 Bird experts at the Cornell Lab of Ornithology in New York say the most likely reason for the invasion is an abundance of rodents (lemmings are their prey of choice) in northern Quebec last year, and again on Bylot Island in the eastern Canadian Arctic this summer, that helped snowy owl pairs reproduce in large numbers. The population explosion sent the young birds up to 2,000 miles south, away from their regular Arctic stomping grounds in search of new hunting areas.

Naturalist and author Scott Weidensaul says the scientific term for the phenomenon is an “irruption.”

“An irruption, in ornithological terms, is an unpredictable migratory movement of birds, generally applied to northern raptors and finches moving south well beyond their typical range,” he explained. He adds that the 2013-2014 winter season was the largest irruption in the Northeast in at least half a century, maybe longer. Now in its second consecutive year, Weidensaul says this winter’s irruption is shaping up a bit differently.

“We’re seeing a lot of young birds, and the high nesting success on Bylot and other areas in the Canadian Arctic likely contributed,” he said. “But there are definitely more adult birds, many of them second-year owls based on their molt patterns, which may be birds that were part of the 2013-14 irruption.” 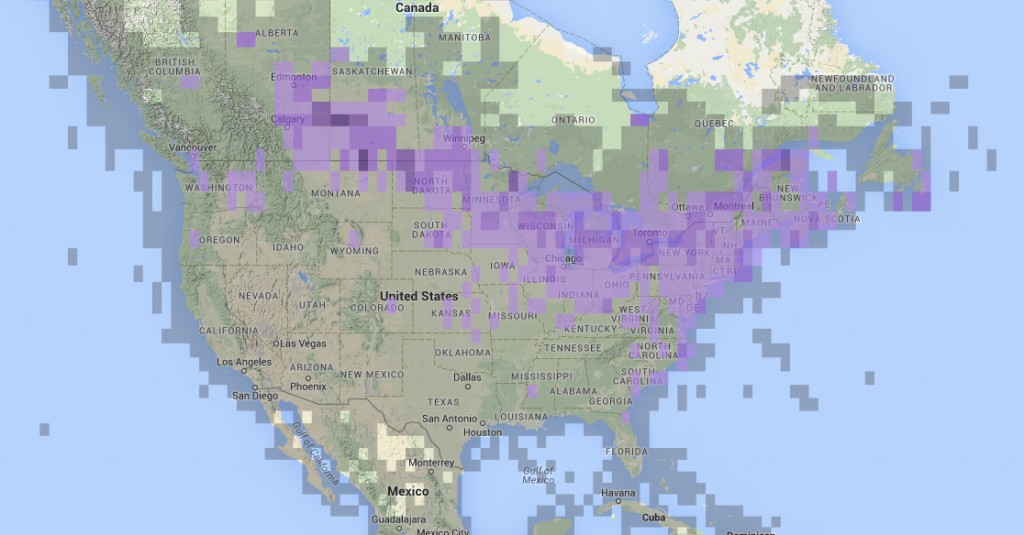 A map of snowy owl sightings for 2014 from eBird.org, a project of the Cornell Lab of Ornithology.

Snowy owls are used to the barren tundra of their Arctic home in the far north, so when they do make a move they tend to hang out in wide open flat spaces, where they can quickly and easily see their next meal. That makes airports a favorite haunt for the owls, much to the dismay of airport authorities. Birders in Washington, D.C., can already lay claim to their first sighting of this season and the farthest south, where else but at Reagan National Airport. The Arctic owl was spotted near the runways on Dec. 20, the date of the annual Christmas Bird Count, held since 1900 to document the number of bird species nationwide. 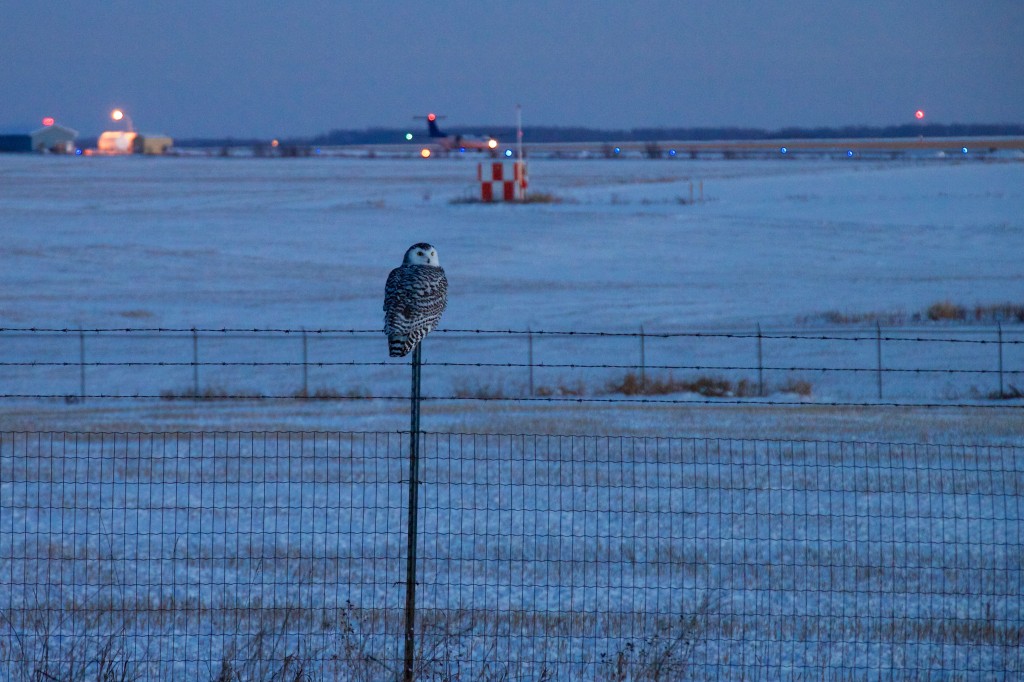 At Windsor International Airport in Ontario, Canada, staff reported they banded a dozen or more owls in the month of December alone. Airport manager Phil Roberts told the CBC, “Snowies are heavy birds and they also have no experience with humans or machinery, including aircraft. So the fact is they don’t react fast enough to stay out of the way of aircraft and because they’re so big, the probability of an aircraft being damaged from hitting a snowy is very high.” Snowy owls weigh anywhere from 3.5 to to 6.5 pounds and have an average wing span of more than 4.5 feet, according to National Geographic. Airport employees carefully catch and band the birds, watch them for 24 hours, and then release them about 30 miles away. 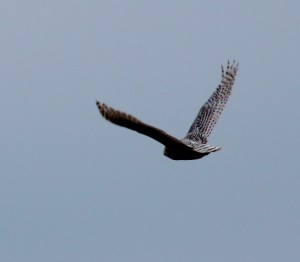 Back to our snowy owl perched atop its telephone pole — she didn’t stay put for long, but took off over the fields in a series of graceful swoops. Our next step was to log our observations on eBird, the global tool for tracking birds and collecting data for scientific research that’s run by the Cornell Lab of Ornithology and the National Audubon Society. Founded in 2002, it’s essentially crowdsourcing for birds. A map pinpoints the bird’s location, a checklist provides details of the sighting and in many cases, birders leave photographs, video and audio clips as learning tools for other birders and scientists. The map is interactive, and you can see our sighting or add your own here. There’s also a downloadable app for mobile phones that helps birders in the field record their observations immediately.

Technology is also helping another group track the snowy owl invasion in more ways than one. Founded last year and mostly crowd funded, Project SNOWstorm is a collaboration among scientists to track the movements of snowy owls using GPS-GSM transmitters. The solar-powered devices collect, store and return information using the cellular phone network, transmitting data when a bird flies within range of a cell tower. Twenty-two birds were outfitted with the transmitters during last year’s irruption, from Minnesota to Massachusetts, and scientists watched and learned as the data rolled in. 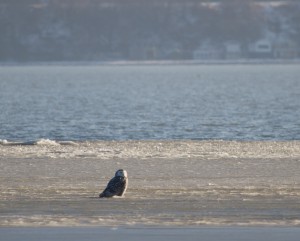 A snowy owl on the ice. Photo by Flickr user Steve Valasek

Scott Weidensaul is one of the group’s founding members. He told the NewsHour, “Some of what we’ve found confirms longstanding suspicions, such as the reliance on waterbird prey like ducks, geese, gulls and grebes for coastal snowies. We’ve seen that some owls are profound homebodies, rarely straying more than a half-mile all winter from their tagging site, while others roamed across hundreds of miles. One of the biggest surprises was the way immature owls along the Great Lakes moved out onto the frozen lake surfaces for weeks or months at a stretch, apparently haunting cracks and leads in the ice plates where ducks and other waterfowl could be found. In this, they echoed recently documented behavior among adult snowies, some of which migrate ‘north’ in winter, and remain along permanent open-water leads known as polynyas in the Arctic pack ice, hunting sea ducks.”

So far this winter, two of the 22 snowy owls with transmitters have turned up in cell range again. “That’s gravy,” Weidensaul says. “Our main focus is documenting their movements and ecology down here on the wintering grounds. The birds we tagged last winter gave us a treasure-trove of incredibly detailed data before they headed back to the Arctic.” The transmitters can hold up to 12 years’ worth of data, so the birds still have plenty of opportunities to return a wealth of information on their activity and travel.