Finding a complete dolphin skeleton to study isn’t easy, unless you have a dolphin graveyard

BEAUFORT, N.C. — Keith Rittmaster walked out of his trailer, arms filled with shovels, buckets and brushes. It was the day of the big dig, and Rittmaster led a group of 14 volunteers through a “Secret Garden”-style forest entryway into what he calls the “dolphin graveyard.”

It’s difficult to study the behavior and anatomy of dolphins and other marine mammals who dwell deep in the ocean. Rittmaster, a natural science curator at the North Carolina Maritime Museum, has studied dolphin populations for decades. He has also designed several whale and dolphin “graves,” which allow flesh to slowly decompose and leave clean, dry bones for further examination.

But the biologists and citizen scientists who crowded Rittmaster’s “graveyard” were there for Moe — well, more specifically, for his skeleton. Moe was a bottlenose dolphin who Rittmaster had tracked for decades. When Moe died, Rittmaster buried his bones in the graveyard.

When Moe’s bones are completely reassembled, a process that is expected to take about two years, it will be one of the first intact skeletons of a bottlenose dolphin, said Joshua Summers, a private field biologist who works with Rittmaster. It offers researchers a rare opportunity to better understand how dolphins age and how they die.

“Moe has a long history [with us], so we wanted to create a skeletal display to tell this story of research and conservation,” Rittmaster said.

Rittmaster and Moe’s journey together began in 1992.

Each winter, Moe traveled the North Carolina Coast, from Nags Head to Cape Lookout. As a biologist, Rittmaster identifies and tracks North Carolina’s dolphins and whales daily. He photographs the dolphins’ dorsal fins, looking for notches, scars, and blemishes that act like a fingerprint. Using these markings, Rittmaster can tell who’s who.

Moe and Rittmaster met regularly in this way for nearly 30 years. And often, Moe wasn’t traveling alone. His best friend and male lifemate, Buddha, swam with him up and down the coast. Among dolphins, “bromances” often overrule female-to-male and mom-to-calf relationships, so Rittmaster watched as their friendship persisted throughout the years. When Buddha passed away about four years ago, Moe changed. 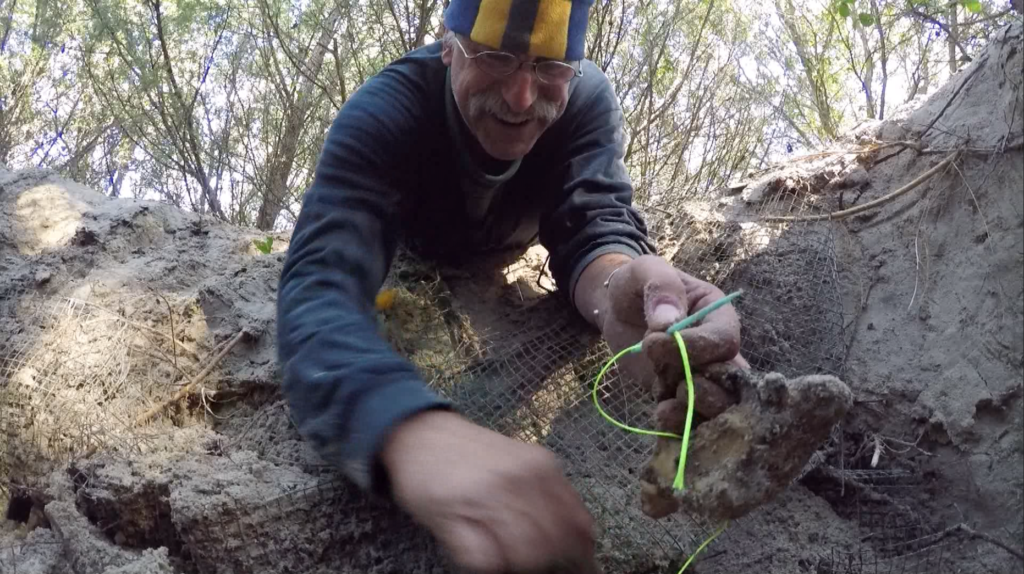 Keith Rittmaster pulls out some of the first few bones belonging to Moe, the bottlenose dolphin. Photo by Teresa Carey

Moe spent the next two years alone, until March 27, 2016, when Rittmaster received a call from his colleagues at the North Carolina Marine Mammal Stranding Network.

They had found Moe dead inside the estuary of the Rachel Carson National Estuarine Reserve, said Vicky Thayer, a marine mammal stranding coordinator with the network.

Thayer’s team took pictures so Rittmaster could identify Moe and brought the body back to her lab. After peeling through skin and blubber, analyzing blood and tissue samples and taking body weight measurements, Thayer discovered that Moe had likely “been entangled in some kind of fishing monofilament line … probably monofilament fishing net, which can really cut through flesh and cause an even worse problem,” she explained.

Moe’s story is common. According to the National Oceanic and Atmospheric Association, 2016 was the third record-breaking year in a row for whale entanglements, with 71 reports made on the West Coast alone. Humpback whales suffered the most last year, with 54 entanglement cases.

“During the first 15 years [we studied these mammals], I had never seen entangled dolphins — dead or alive. But in the last 10 years, I’ve seen at least a dozen, and it’s getting worse,” Rittmaster said. He and Thayer, who are married, have found a number of stranded animals, from an adult sperm whale to an infant dolphin, entangled in fishing gear. 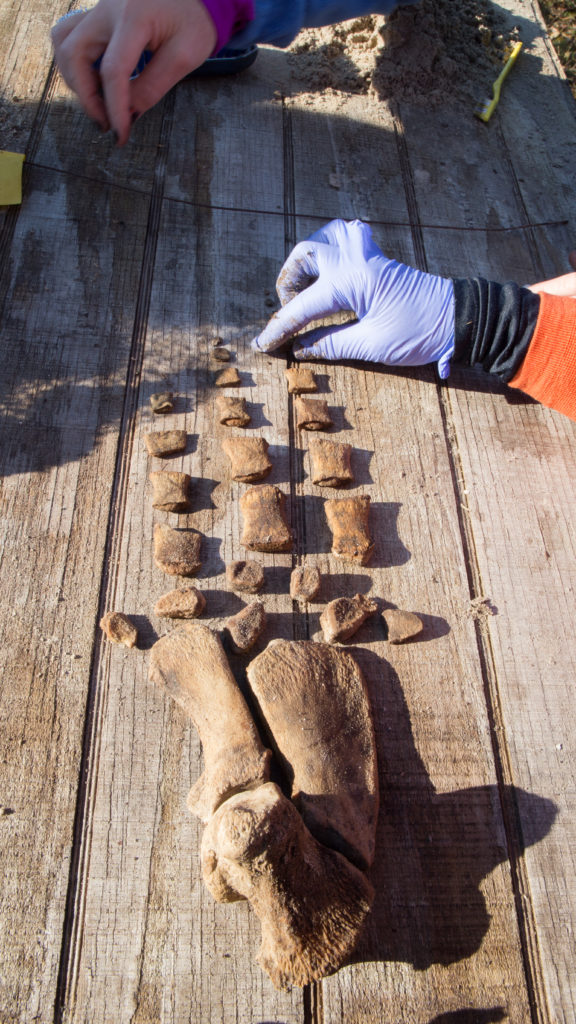 From the largest to the smallest, Moe’s bones were buried for nearly two years. Here, a volunteer group lays out Moe’s left flipper to label and send for reconstruction. Photo by Rashmi Shivni

Thayer explained that young cetaceans — whales, porpoises, and dolphins — and other marine animals like seals and sea turtles suffer the worst entanglement cases. When baby animals get caught up in plastic lines, their bones continue to grow around the foreign objects. Veterinarians call this remodeling. The young creatures become malformed, leading to disease and underdevelopment.

To reduce the amount of fishing line and nets adrift in the ocean, Rittmaster created the North Carolina Monofilament Recovery and Recycling Program. He installed 42 collection bins near beaches and waterways across the state. When the bins fill up, the discarded fishing lines go to Berkley, an Iowa-based fishing company that recycles the trash into artificial, underwater habitats to attract fish and encourage plant growth. 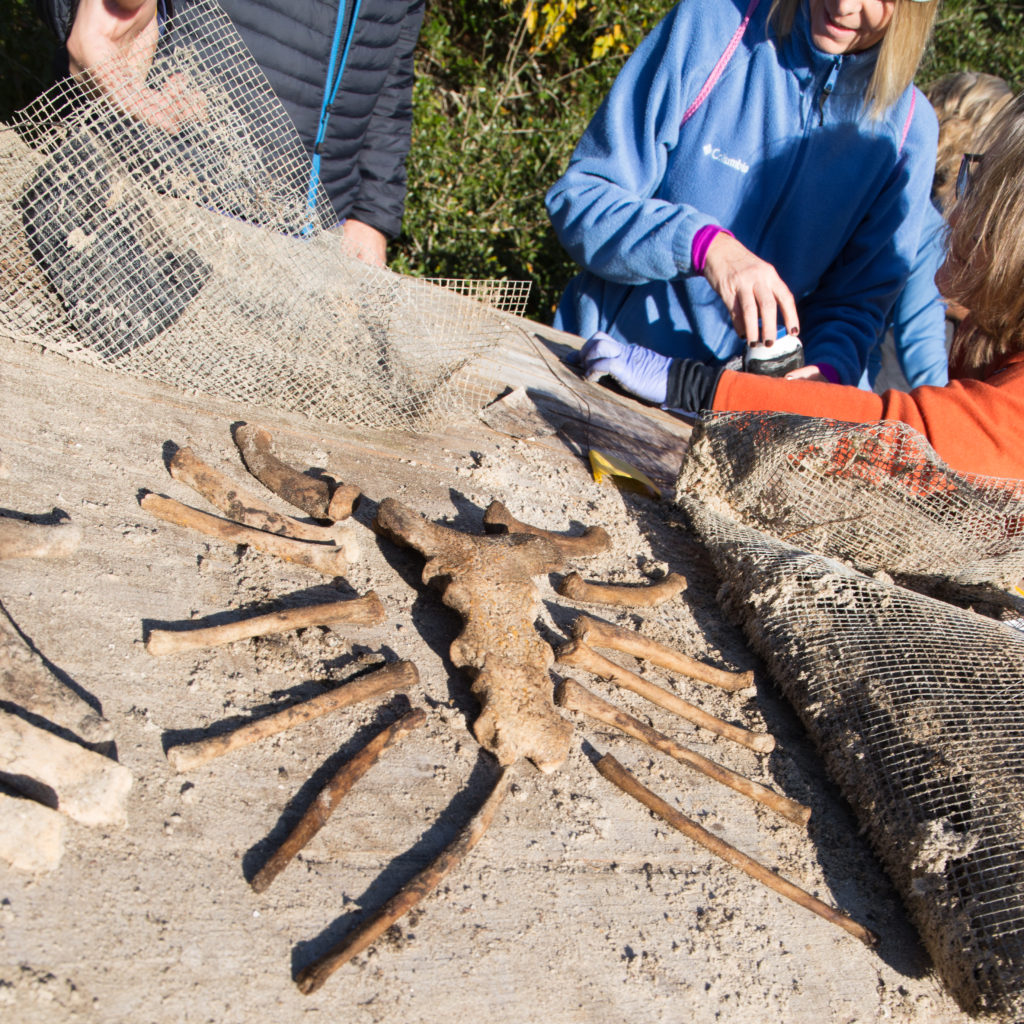 Moe’s sternum and ribs are huge in comparison to humans. Laid out for labeling, these bones will soon be sent for reconstruction. Photo by Rashmi Shivni

The group in Rittmaster’s graveyard spent four hours one December day digging, brushing and labeling each of Moe’s bones. After nearly two years underground, decomposition had removed the flesh clinging to Moe’s bones and left a clean specimen to study. Volunteers gently moved Moe’s vertebrae, skull, ribs, and appendages to stations for dusting and sorting.

“There is an urgency to do work like this right now for conservation reasons and because it moves the research forward faster,” volunteer citizen scientist Molly Matlock said.

When Moe’s skeleton is fully reconstructed, researchers will be able to compare it to Rittmaster’s decades-long collection of data. Rittmaster hopes to display Moe at Jennette’s Pier in Nags Head North Carolina.

Piecing together full skeletons allows scientists to discover and study new species and to learn about age, disease and deformities — all of which inform their understanding of the dolphins’ behavior and the environmental risks they encounter in their lifetimes. In Moe’s case, they suspect it will also shed light on how entanglement played a role in both his life and death.

“I feel that every stranding is a gift from the ocean,” Thayer said. “We can learn so much from every animal. And my hope is that what we’re learning today can help animals in the future so that maybe we don’t have as many causes of death that are caused by humans and are possibly preventable.”

Left: A team of citizen scientist volunteers and marine biologists gather at a labeling table with Moe's left ribs laid out. This bottlenose dolphin's skeleton will inform the public and researchers of a serious threat to marine life--entanglement. Photo by Rashmi Shivni