First Harvey, now Irma. Why are so many hurricanes hitting the U.S.?

Less than a week after Hurricane Harvey tore through Texas and Louisiana, causing at least 60 deaths and billions of dollars in damages, Hurricane Irma appears ready to make U.S. history.

Irma on Tuesday grew into a Category 5 storm — with wind speeds exceeding 156 miles per hour — as it moved toward the Caribbean and southern Florida. If the storm maintains course and this ferocity, it will rewrite the history books.

“The U.S. has never been hit, since we started collecting records in 1851, by two Category 4 or stronger hurricanes in the same season.”

“The U.S. has never been hit, since we started collecting records in 1851, by two Category 4 or stronger hurricanes in the same season,” said Jeff Masters, a meteorologist and co-founder of Weather Underground. “If Irma follows the current National Hurricane Center projection, that will happen.”

Some uncertainty still surrounds Irma’s fate, so here’s what Puerto Rico, south Florida and the rest of U.S. should expect from the storm — plus an explainer on why this hurricane season is churning out so many extreme storms.

‘Florida’s best hope’ could be Cuba’s disaster. Computer models are strongly predicting that the eye of Hurricane Irma could make landfall in Puerto Rico, the British and U.S. Virgin Islands, as it moves toward Hispaniola and Cuba. Hispaniola and Cuba will largely dictate the fate of what happens to the Florida Keys, Miami and the rest of south Florida, Masters said.

“Cuba is a big island, with a lot of mountains. It could definitely destroy the inner core of Irma, if the storm were to spend more than 12 hours over Cuba,” he said. “That’s kind of Florida’s best hope right now.” 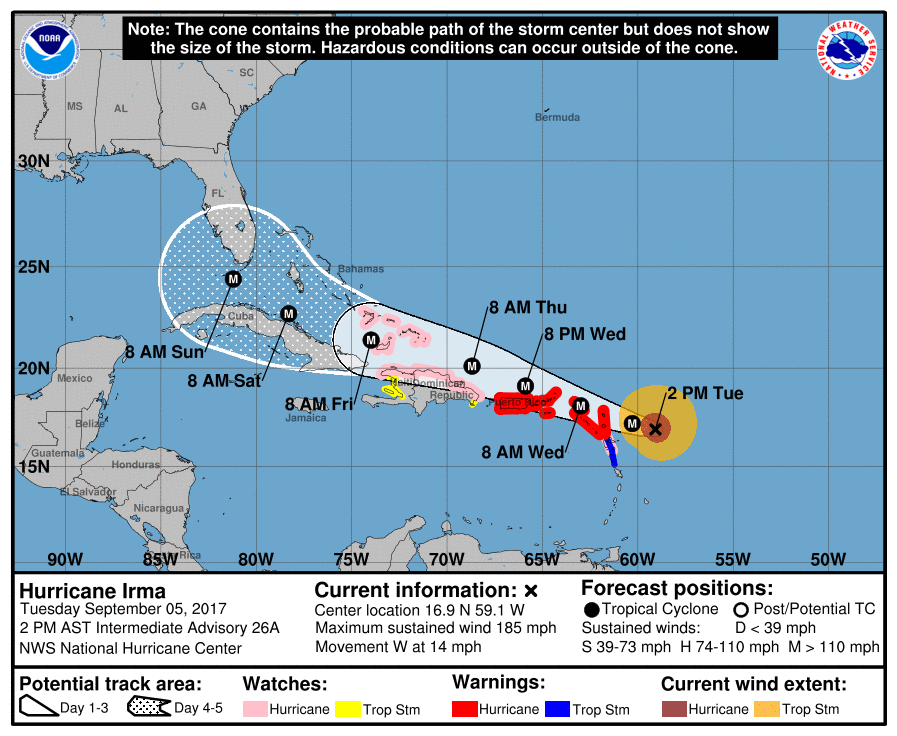 The storm would need to spend time over open water to rebuild its core, which it wouldn’t have before making U.S. landfall. But if the storm squeaks through these islands, then it’s likely to be a Category 4 or Category 5 hurricane when it hits, Masters said.

A Category 5 hurricane has not hit the mainland U.S. since Hurricane Andrew in 1992, and such an event has only happened to the nation three times since record keeping began in 1851. Because of the rarity, Masters and other meteorologists are not calling for a Category 5 landfall in the U.S. at the moment.

Meteorologists should become fairly certain about Irma’s severity and threat to the U.S. by Wednesday, Masters said, as certain variables in the weather forecast become clearer.

Here’s why so many hurricanes are heading toward the U.S. Masters said “the Atlantic is primed for making major hurricanes”right now due to three major ingredients.

“Typically, over the last 10 to 12 years, we tend to have a ridge of low pressure along the east coast, which has helped steer the storms away.”

First, and most pertinent, is weak wind shear. Hurricanes lose potency when winds near the ocean surface blow at one speed and direction while winds in the upper atmosphere blow another. This difference — or shear — causes a hurricane to physically tilt, like a top, which dampens the force of the winds emanating from it.

“Right now, the shears are pretty low, and as you can see the storm looks pretty symmetrical,” Philip Klotzbach, an atmospheric scientist at Colorado State University, told the NewsHour.

The other two ingredients are warm Atlantic ocean temperatures that extend deep underwater and high levels of moisture in the air. Irma is brewing where sea temperatures hover around 85 degrees Fahrenheit, which are ideal for fueling intensification. Meanwhile, the air has 55 percent relative humidity, which is a little on the dry side, Masters said, but still enough to make a strong storm.

Irma is following on the heels of Harvey, because of a change in air pressure along the East Coast, Klotzbach said.

“Typically, over the last 10 to 12 years, we tend to have a ridge of low pressure along the east coast, which has helped steer the storms away,” Klotzbach said. But this invisible ridge has pushed westward this year, leaving the eastern seaboard, the Caribbean and the Gulf of Mexico exposed to hurricanes.

Some saw this coming. In early July, Klotzbach’s team at Tropical Meteorology Project predicted the Atlantic Ocean would experience an above-average hurricane season because of the El Niño-Southern Oscillation (ENSO) — or rather because of its absence this year.

“We’ve only had 16 other hurricanes on record that have been as strong as Irma is right now.”

El Niño creates extremely warm temperatures in the Pacific Ocean, which pushes strong winds into the Atlantic, creates high levels of wind shear and stops hurricanes. When Pacific sea temperatures reverse and cool, it creates La Niña, which tends to drive hurricanes. Here’s the strange thing. ENSO is neutral this year, so you might expect an average year of Atlantic storms.

But 2017 has behaved much like 2005, when ENSO was neutral but the U.S. still experienced a bevy of colossal storms by the names of Hurricanes Katrina, Rita and Wilma.

Harvey and Irma appear to be replicating that legacy. Harvey dumped a record 24 trillion tons of water onto Texas and Louisiana, meanwhile when Irma’s wind speeds reached 180 mile per hour on Tuesday, it became one of the strongest Atlantic storms in history.

“We’ve only had 16 other hurricanes on record that have been as strong as Irma is right now,” Klotzbach said. Irma reached 175 mile per hour wind speeds farther east than any other known Atlantic hurricane, and its 3.5 days and counting as a major hurricane trails only Hurricane Luis in 1995.

On Tuesday, the National Hurricane Center said another weather event — tropical storm Jose — had formed in the Atlantic.

Worst case scenario for Florida. If Irma misses Hispaniola and Cuba, then Florida should expect damages on par with Hurricane Donna of 1960, Masters said.

If a hurricane of this magnitude hit Florida today, it could cause between $50 billion to $100 billion in damages.

“[Hurricane Donna] hit the [Florida] Keys and then the west coast of Florida as a Category 4 storm, and then tore through the center of the state as Category 3,” Masters said.

Residents of the Florida Keys experienced 13-foot storm surges before Donna slashed up the East Coast, becoming the only storm to produce hurricane-force winds in Florida, the Mid-Atlantic states, and New England.  If a hurricane of this magnitude hit Florida today, it could cause between $50 billion to $100 billion in damages.

Klotzbach urged people to pay attention to whether or not hurricane watches or warnings have been issued for their communities because of Irma’s immense size. He does not expect Irma to dump as much rain as Harvey, but even if a storm doesn’t track directly over Miami, its storm surge could have a huge impact on south Florida, he said. Heavy rains, storm surge and flooding will likely hit Georgia and the Carolinas after next weekend. 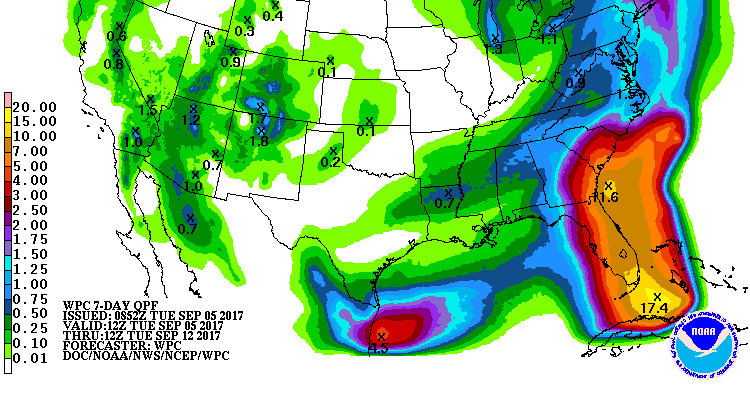 “Follow the advice of the local emergency management. They’ll tell you whether you should evacuate or shelter in place,” Klotzbach said.

The age of Category 6 hurricanes? A fake news story, which garnered more than 2 million shares on Facebook over the weekend, asked if Hurricane Irma and its 180-mile-per-hour winds could be considered a Category 6 storm?

No, said Masters, who raised the idea of Category 6 classification in 2016 as a thought experiment.

“There never will be a Category 6 on the Saffir–Simpson scale because Category 5 is already catastrophic,” Masters said. But climate change is expected to intensify the winds and rains of major storms over the next century.