First steps of a baby Stegosaurus, captured in 3-D

On recent afternoon, Matthew Mossbrucker circles a collection of sandstone boulders outside of the Morrison Natural History Museum, tucked in the foothills of the Rocky Mountains in Colorado. His fingers trace over what he calls the “Jurassic jambalaya” of the sandstone — bits of bones, teeth, ripples from ancient streams and dinosaur footprints.

“This is the original Jurassic Park,” says Mossbrucker, the curator and director of the museum, as he gestures to the surrounding hillsides. The town of Morrison, 17 miles west of Denver, made headlines when famous geologist Arthur Lakes uncovered the first Stegosaurus fossil there in 1877. Bones of other Late Jurassic dinosaurs, like Apatosauruses, Camptosauruses and Allosauruses, have also been unearthed in the area.

And it was late one afternoon in 2007 when Mossbrucker himself found something extraordinary in the sandstone — the footprint of a baby Stegosaurus dinosaur.

“The light hit it just right, and I went, ‘Oh, it’s a track!’” he said. The tiny dino wouldn’t have been much larger than a house cat. Based on its size, no bigger than a quarter, it had recently hatched.

“It could have slept in its mother’s footprint,” he said.

At first, he wanted to be sure of its origins. He sent photos to colleagues to get their opinions. But those two-dimensional photographs didn’t do the find justice. The finding was soon confirmed as the first baby Stegosaurus footprint ever found.

But his desire to share and study this fossil outpaced the technology available to him at the time. So he turned to 3-D modeling. Mossbrucker has since become one of a growing number of scientists to use 3-D photogrammetry, technology that turns photographs into three-dimensional models, to study fossils.

To the untrained eye, baby dinosaur footprints are hard to see. But with 3-D modeling, tracks of once-living dinosaurs can be studied and preserved in a matter of minutes. And it can be done for free with just a few iPhone photos. 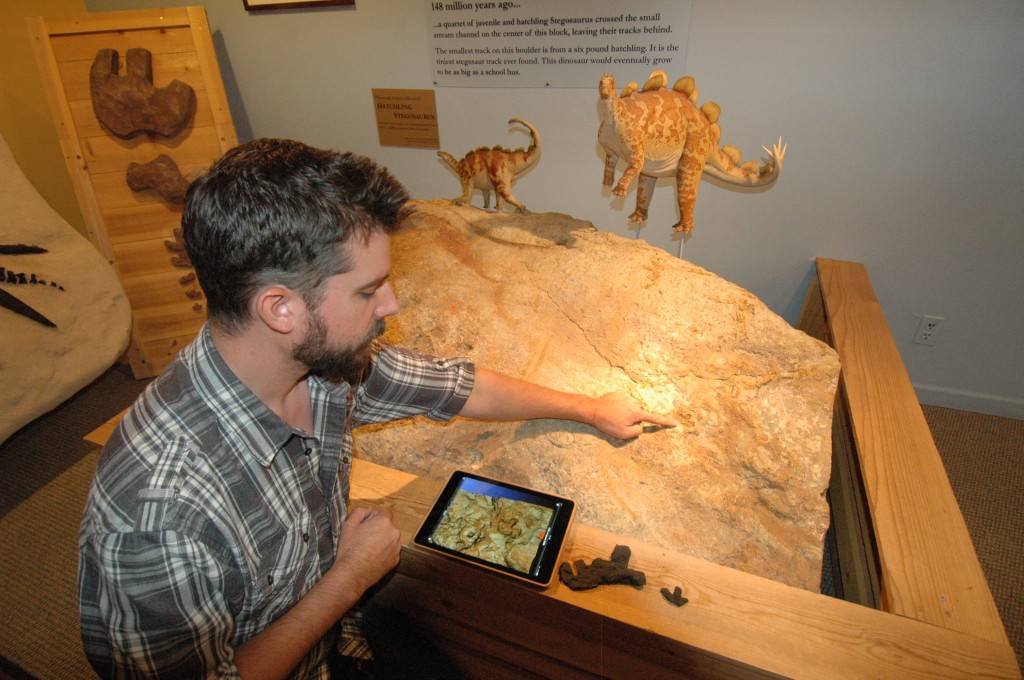 Matthew Mossbrucker, director and chief curator of the Morrison Natural History Museum, points out baby Stegosaurus tracks. Mossbrucker has found these in boulders along the highways in Morrison, Colorado. On his iPad is a 3-D model of the footprint. Photo by Rebecca Jacobson

Recognizing 150 million-year-old tracks requires a sophisticated understanding of dinosaur feet, said Bob Bakker, a well-known paleontologist, author and a volunteer curator for the Morrison museum. Stegosauruses walked like “three ton ballerinas,” he said, “They were big guys with tiny feet.” Their hind feet had three blunt square toes and their forefeet had five short spread-out toes. They are completely unique in the dinosaur world.

Paleontologists looking for fossils often miss tracks. Originally a “bone guy” himself, Bakker found his own set of adult Stegosaurus tracks in the Morrison hills on a spring evening in 2007, after searching the area for 25 years. He was walking near Quarry 5, where Lakes had found the first Stegosaurus. (Bakker takes off his hat in reverence when he mentions Lakes’ name.) There in the “magic hour” light, he saw adult Stegosaurus tracks.

“And there they were! Right there!” Bakker exclaimed. “I probably stared at them 100 times. There isn’t anything like a Stegosaurus track on God’s green earth.” It was that discovery that led Mossbrucker to search the area for more footprints, eventually finding the baby tracks. 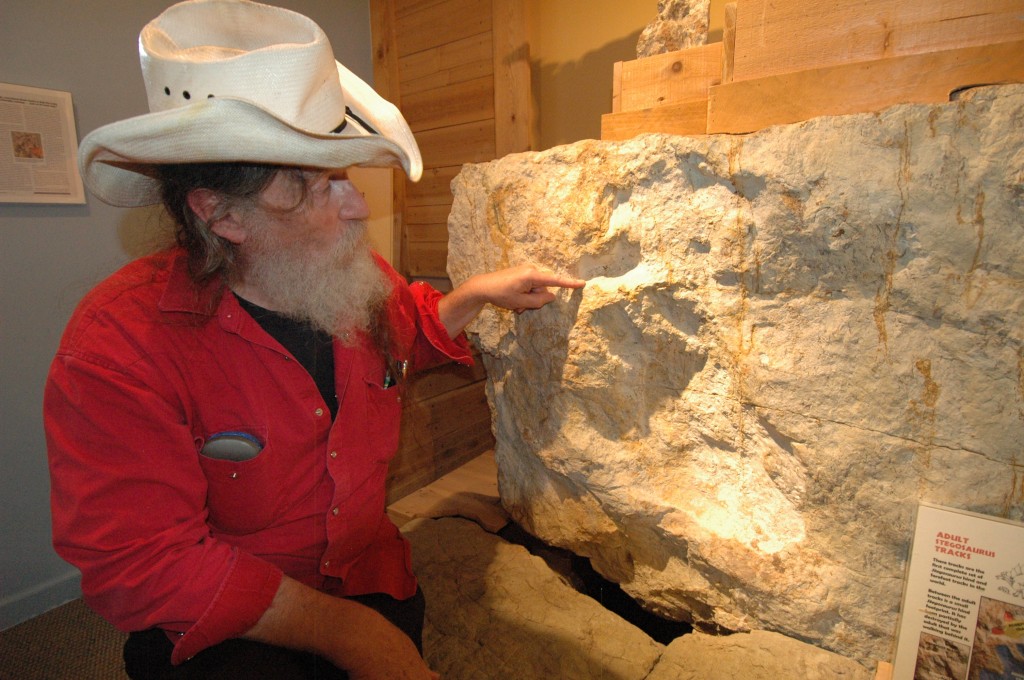 Bob Bakker, curator of paleontology for the Morrison Natural History Museum, points out the adult Stegosaurus tracks he found near Morrison, Colorado. They are now on display at the museum alongside the first baby Stegosaurus tracks. Photo by Rebecca Jacobson

When Mossbrucker’s baby Stegosaurus hatched approximately 150 million years ago, there were no Rocky Mountains, Bakker said. Colorado was a flat, hot, dry savannah, where river beds filled with water during flash floods, burying bones and leaving a soft, sandy surface for dinosaur families to walk through. The tracks left behind can give scientists clues to how big the dinosaurs were, and how they hunted, moved and lived together.

For example, the baby footprints were found among adult and juvenile tracks, which suggests that the Stegosauruses traveled in groups. That means they were social animals, Bakker explained. And social organization may have helped them survive.

“If you’re a baby Stegosaurus and you’re dumb as a post, and your mom is dumb as a post, how do you survive these meat-eaters that are 20 to 50 times smarter than you?” Bakker asks. “Social organization might be the answer.”

“Footprints are really special,” said Peter Falkingham, a research fellow at the Royal Veterinary College in London. “They offer something completely different to the bones. They’re something the animal left while it was alive, and they’re the only record we have of locomotion and behavior and environment.”

But these footprints are also fragile. Dinosaur tracks are exposed to millennia of weather, erosion and even construction, which can destroy the markings. These Stegosaurus footprints were tossed alongside the road in the 1930s, when the Works Progress Administration dynamited the hillsides to build highways. When the highway was expanded seven years ago, Mossbrucker was afraid fossils would again be lost. He hired a local backhoe and had the boulders brought to the museum, where they were stored in the museum’s parking lot until Mossbrucker could study them.

At the time, Mossbrucker wanted to scan the footprints in 3-D, like the Smithsonian Natural History Museum is doing with the Tyrannosaurus rex. The track is so small that even in the museum’s light it’s hard to discern. But in 2008, the recession hit, and the tiny museum, which operates on a $90,000 annual budget, lacked the money for the technology.

This year, on a whim, he sent three photos of the footprint from his iPhone to Heinrich Mallison, a vertebrate paleontologist at Museum für Naturkunde in Germany who’s been working to expand the use of 3-D photogrammetry in the field. Mallison emailed him a three-dimensional image 12 minutes later. 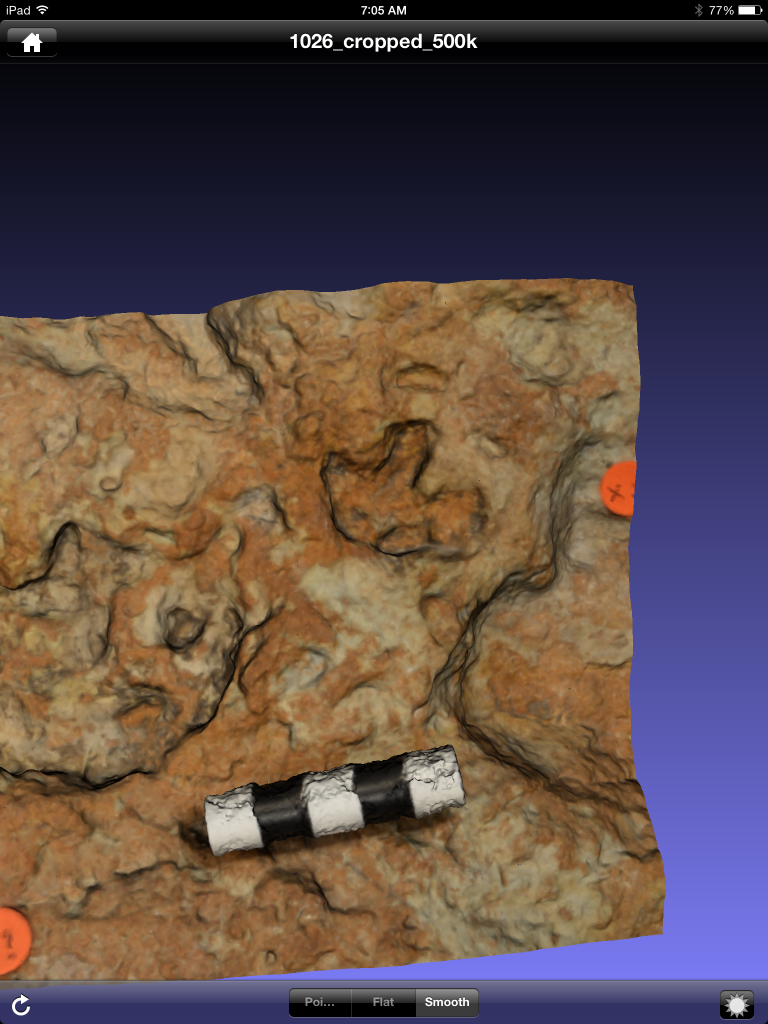 Photogrammetry, a technique that takes still images and creates a 3-D model, is being used in paleontology to capture baby dinosaur tracks. This baby Stegosaurus track was found near Morrison, Colorado. Image courtesy Matthew Mossbrucker, Morrison Museum of Natural History

Now, Mossbrucker pulls up the image on his iPad while standing in front of the fossil. On the display, he can rotate the image, even change the light source, revealing its depths from different angles.

Photogrammetry relies on photographs taken from several angles to create a three-dimensional image. It’s not a new technique, but now computer programs can generate these images much faster, Mallison wrote in an email. Some of these programs, like Visual SFM, are free. The technique gives new life to the ancient tracks that old methods couldn’t capture, he said.

He lists off the limitations of the old methods.

“Drawing outlines omits all the information on track depth, which is related to weight distribution in the foot and other things,” he writes. “Also, where exactly to draw the outline is often difficult to say. Also, how do you document fine scratches left by skin scales? How do you document undercuts? How do you document really huge surfaces with lots of prints? Photogrammetry now offers the ability to quickly, cheaply and easily email a high-resolution representation of a fossil around the world.”

Studying a dinosaur track in detail used to mean traveling to the site. Now scientists have infinitely greater access to faraway fossils.

“For the past 150 years, since tracks were first described in literature, at best you could get a photograph, but you lose all this information like depth and where the sediment has bulged,” Falkingham said. “Someone in China could produce a digital footprint and I could get all the information out of it that I could if I traveled to China in the first place. If we have a track that’s strange and weird, we can all pitch in and get to conclusions a bit quicker.”

Left: A technique called photogrammetry was used to create these 3-D images of a baby Stegosaurus track found near Morrison, Colorado. The track, which is about the size of a quarter, is hard to see in a two-dimensional photograph. With this technique, scientists can send a high-resolution 3-D copy of a site around the world with just a few cell-phone images. Image courtesy Matthew Mossbrucker, Morrison Natural History Museum