Will New Levees Protect New Orleans From the Next Hurricane? 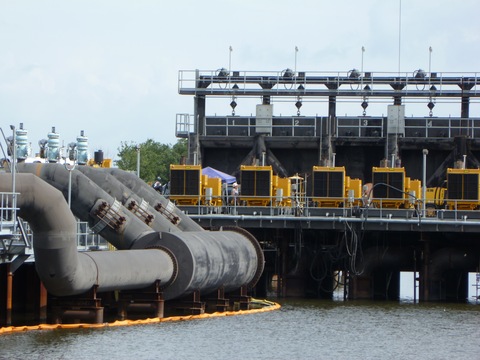 On a steamy morning June 2006, less than a year after Hurricane Katrina, I sat in a packed ballroom at a hotel in downtown New Orleans to hear the commander of the U.S. Army Corps of Engineers take the podium and accept blame for the single biggest civil engineering failure in American history.

It was a stunning admission.

For months, members of the Corps had blamed the massive breakdown of the city’s levee system on mother nature.

But now a 6,000-page report that cost the Defense Department more than $20 million had said its own Corps had built levees and floodwalls that were “a system in name only,” incomplete, inconsistent and with design performance flaws.

“We do take accountability,” Lt. Gen. Carl Strock said. “It’s been sobering for us,” he added to “have to stand up and say: We had a catastrophic failure of one of our projects.”

A second and a third independent investigation had similar findings. One even went so far as to say the Corps took short cuts in building the levees to save money.

In the five years since those levees failed — flooding 80 percent of New Orleans and killing more than a thousand people — the federal government has spent $15 billion trying to fix what went wrong.

The Army Corps of Engineers is, at Congress’s direction, constructing what it says is a flood protection system rated for 100 years — in other words, able to withstand a storm likely to occur once every 100 years on average. The Corps says the system has some resiliency up to the level of a once-every-500-years storm.

Twelve miles from New Orleans at Lake Borgne, the Corps is building a massive wall 26 feet high and two miles long. That’s where the huge post-Katrina storm surge pushed water down a ship channel dredged years earlier by the Corps, resulting in some of the worst flooding in St. Bernard Parish and areas of East New Orleans. 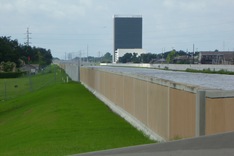 At the Industrial Canal in the city’s Ninth Ward, another big new floodwall has been built. The Corps says it can hold its own against any hurricane of the same intensity as Katrina.

New floodgates have also been built at another breach site in the Lakeview section of the city where the Coast Guard tried to stop the flooding by dropping sandbags in the flood waters for days.

The Corps says the new floodwalls and levees are taller and sturdier than the ones that failed during Katrina. The old floodwalls were I-walls — straight up-and-down walls shaped like an uppercase I sunk into the ground. The new walls are T-walls, shaped like an upside-down T with horizontal cross-brace to increase strength. The Corps says the new levees use a stronger mix of clay and soil than before.

But in spite of all the construction, some critics are still asking serious questions about just how safe it is to live in New Orleans.

Professor Bob Bea, one of the country’s top civil engineers — whom President Barack Obama has asked to help investigate the Deepwater Horizon incident — says the New Orleans levees and floodwalls today are still not a “system.” Bea, who teaches at the University of California Berkeley, says “it is still a patchwork quilt.”

Bea believes nothing in the Army Corps of Engineers has changed significantly. “They have received raises, more funding, promotions, larger appropriations, larger projects.
They have talked change,” he says. But there’s been “little walk to match the talk.”

For five years now she has been a thorn in the side of the Corps, keeping a watchful eye on every move made by the federal government’s chief civil engineers. And she doesn’t like what she’s seen.

Shortly after Katrina, the New Orleans homemaker and mother of three founded Levees.org. Today the watchdog organization has about 25,000 members nationwide.

When Rosenthal began Levees.org, she didn’t know a t-wall from a flood wall. Today, she’s one of the most knowledgeable laypeople in the country on all things levees.

Her mantra is simple: “People need to understand the flooding of New Orleans was not an act of nature,” she said from her office in her Uptown home. “It was man-made.”

And five years later she is depressed and saddened at what she sees at the Corps.

“No one was fired, no one was demoted, no one resigned and no institutional changes were made,” she said.

Rosenthal told the NewsHour that an employee of the Corps who’s become a whistleblower will say in a documentary to be released next week that the new flood gates at the 17th Street Canal won’t work if a Category 3 hurricane or higher comes through New Orleans again.

“The engines that power the gates will burn up,” Rosenthal said. “And the water will just keep coming.”

Rosenthal is also perturbed that the Corps is insulated from lawsuits. “They’re protected by the Flood Control Act of 1928,” she said. “It makes them immune to lawsuits.”

So far, she’s correct. None of the attempts by residents of New Orleans or area organizations to sue the Corps for negligence have gone anywhere in court.

Rosenthal says her work will go on until she thinks that most Americans believe that the flooding of her hometown was caused by the negligence. And, like Bea, she does not believe the people of New Orleans are any safer today from a major hurricane flooding event than they were on August 29, 2005.

But the Army Corps of Engineers, and some outside experts, disagree. Karen Durham-Aguilera, a civilian engineer responsible for overseeing the Corps’ new hurricane protection plan, told The New York Times that the new construction is a “comprehensive-system approach.” Compared to before Hurricane Katrina, she says, “We’re not even in the same universe anymore.”

The NewsHour’s e-mail and telephone requests for an interview with a representative of the U.S. Army Corps of Engineers were not returned.

Ricardo Pineda, a commissioner on the Southeast Louisiana Flood Protection Authority, told the NewsHour that he’s confident what the Corps is building is the “best system we can build given the 100-year protection [the Corps was directed to provide].” He says that the Corps has brought in experts from around the country and world, and has used the most up-to-date modeling methods to predict and prepare for potential storm surges.

Still, Pineda, who is the floodplain management chief of the California Department of Water Resources, says that many experts believe that the city really needs a protection plan rated for a 500-year storm, and that his group is working on coming up with adjustments to the plan — such as more replacing grass with other types of sturdier armoring on the levees — that would get closer to that level. 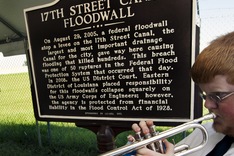 Meanwhile, on Monday Rosenthal and members of Levees.org unveiled a plaque which they erected at the site of the 17th Street Canal, very close to the new floodgate construction.

“I wish they’d have to drive by everyday and see it,” she said, referring to the Army Corp. “People need to remember not just what happened here but why.”

On Thursday’s NewsHour, we’ll have more on the state of flood protection in New Orleans.