Since the revelations of staggeringly high lead levels in the drinking water of Flint, Mich., and more recently reported spikes around the country, people have understandably voiced alarm at the threat such exposure poses to children. On his Web site, filmmaker and Flint native Michael Moore charged Michigan Gov. Rick Snyder with poisoning kids and told readers: “You cannot reverse the irreversible brain damage inflicted on every single child in Flint. The damage is permanent. They are ruined for life….” A reader wrote in response to a New York Times article on the Flint water crisis: “Children with higher blood lead levels will likely live with lifelong mental retardation. According to the CDC [U.S. Centers for Disease Control and Prevention], based on a 2003 study [in 2003 dollars], the average lifetime costs per person were estimated at $1,014,000 for persons with mental retardation. How will the state of Michigan pay…?”

The Flint scandal was horrifying and caused harm in many ways. But the lead levels in the water have not necessarily created blood lead levels that will permanently damage mental functions in children, if the effects of exposure are mitigated by urgent attention to education and health care.

Marc Edwards, a Virginia Polytechnic Institute environmental engineer, first exposed the extent of the Flint contamination, which he describes as an unforgivable breach of social justice. But Edwards says that labeling children as “brain damaged” is also unjust. “Poisoning is obviously a loaded word,” he adds. “I’ve spoken to many parents in Flint, and I’m concerned because I don’t want children there defined by what happened to them.”

The percentage of Flint children with elevated blood lead levels did double, rising from 2.4 to 4.9 percent between 2013 and 2015. These children had levels at or higher than five micrograms/deciliter (mcg/dL), the level the CDC has set for public agencies to take remedial action. In the U.S. the average five-year-old today has a blood lead level of somewhere between one and two mcg/dL. In Flint, alert parents forced complacent officials to stop denying the problem and remove the cause: water from the Flint River that was so corrosive that it leached lead from city water pipes. The actual blood levels in Flint children have not been made public but researchers believe very few if any children experienced blood lead levels that would by traditional standards be considered poisonous. (Scientists speculate that some levels may have been about 10 mcg/dL.)

Neuropsychologist Kim Dietrich of the University of Cincinnati College of Medicine, who helped set the CDC’s lead threshold, says that “the word ‘poison’ is a misuse of the term in this case.” He has studied the impact of early childhood lead exposure for three decades and contributed to scores of peer-reviewed papers on the topic. Dietrich says that five mcg/dL was set on what public health experts call the “precautionary principle”—the idea that when an activity raises threats of harm to human health, precautionary measures should be taken, even if some cause-and-effect relationships are not fully established scientifically. “Yes, blood lead levels in Flint were elevated above the background range, but not in a range associated with pediatric lead poisoning,” Dietrich says.

Although experts differ on what level does constitute poisoning, Dietrich and others say that children below 45 mcg/dL are generally not treated for lead poisoning and children at 15 mcg/dL and below are not likely to suffer lasting impacts of relatively short-term exposure like those experienced by the children of Flint.

“We don’t like to see kids at 10[mcg/dL], because it indicates they’ve been exposed,” Dietrich says. “But after the water problem is remedied, the blood lead concentrations will fall back to background levels in six to 12 months.”

He adds, “There are very few studies done for very low levels of exposure. I have been researching this problem for over 30 years and there is nothing in the data that suggests that children will have negative impacts of short-term low-level exposure over the long term.”

Although some studies have claimed there is an association between low lead levels and mental problems, this research have been criticized. Some of the claims are extrapolated from studies of children with far higher blood lead levels and others are confounded by factors that are very difficult to control or account for.

Robert Fischer, a social scientist at Case Western Reserve University, is an expert on study evaluation who has monitored the lead problem for decades. “If it was just lead, that would be manageable, but lead exposure also correlates with extreme poverty, low resource availability and poor schools,” he says, adding that there are so many intertwined factors, it is nearly impossible to tease them apart.

An exhaustive study of children with blood lead levels averaging more than 17 mcg/dL, published in 2013 in NeuroToxicology, concluded: “It is unclear whether lead exposure or early childhood confounders were driving these associations [between lead and long-term cognitive impacts].” The CDC Advisory Committee on Childhood Lead Poisoning Prevention has concluded that “although lead is a risk factor for developmental and behavior problems, its presence does not indicate that these problems will necessarily occur. No characteristic developmental pattern is attributable solely to the effects of lead, and measures of the effects of lead on children are imperfect.” 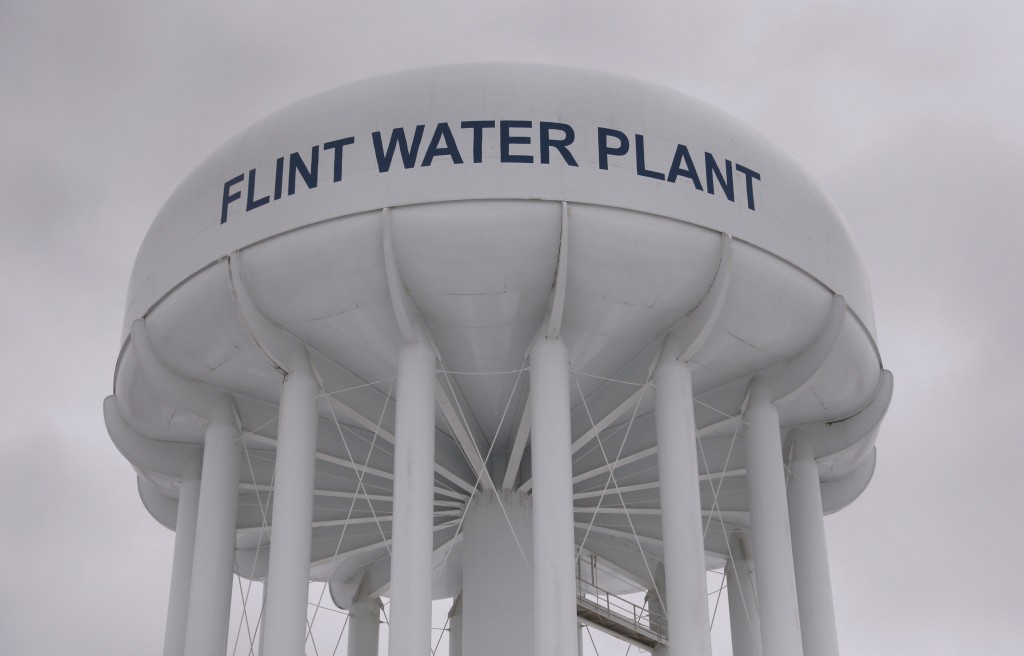 The top of a water tower is seen at the Flint Water Plant in Flint, Michigan January 13, 2016. Photo by Rebecca Cook/Reuters

The idea that something can be done to stave off the effects of lead exposure on the kids of Flint is good news, but it comes with an important caveat: mitigating exposure is more difficult in poor communities than in rich ones. In Flint, the children who have been exposed require urgent attention to their educational and health needs.

Howard Hu, a physician and dean of the School of Public Health at the University of Toronto who has published widely on lead and its impact, expressed outrage at the Flint affair, which he considered completely avoidable. He also notes that the interlaced issues of lead exposure and social inequality point to strategies for intervention and mitigation.

“Certainly, some children are more susceptible to lead than others — we are just beginning to look at this variance,” he says. “But what we do know is that poverty exacerbates the impact of lead on the brain, and Flint is an incredibly economically depressed area.” But a reason for hope, he says, is that “low-level lead exposure can be mitigated by good parenting, good schooling and good nutrition.”

Hu is among several scientists who have found that in children, nutritional deficiencies in iron, calcium or zinc increase the danger, because deficits in these minerals encourage lead absorption. Indeed, lead’s impact on the central nervous system derives in large part from its tendency to mimic calcium, which is essential to neurotransmission, in the nervous system. By mimicking calcium, Hu explains, lead wreaks havoc, essentially causing brain cells to misconnect with one another.

“When children are followed up with lead exposure, the richer kids have more recovery,” he says. “We don’t know why, but poverty exacerbates the impact of lead on the brain. What develops the brain is stimulation—the process of synaptic architecture depends on stimuli—it strengthens the connections needed and prunes those not needed. Lead interferes with that process but stimulation can contribute to reducing the negative impact.”

Although there are no controlled human studies, research in animals also suggests that a stimulating environment can compensate for lead-induced brain damage. Bruce Lanphear, a public health expert at Simon Fraser University in British Columbia, is principal investigator for a study examining fetal and early childhood exposures to prevalent environmental neurotoxins, including lead. “Studies in rats have shown that the effects of lead exposure can be attenuated by environmental stimulation,” Lanphear says.

And there is early evidence that the human brain also may be capable of compensating.

Kim Cecil, a chemist and professor of radiology at Cincinnati Children’s Hospital Medical Center and an expert on the impact of lead on the brain, has found that whereas the language-function region of the brain’s left hemisphere is perturbed by chronic lead exposure, corresponding regions in its right hemisphere show increased activation in the presence of blood lead levels above current levels of concern. What this suggests is that the right hemisphere is stepping up to assume some of the diminished function in the left side of the brain. Perhaps even more surprising, the corpus callosum—the broad band of nerve fibers joining the two hemispheres—showed more conductivity in adults who had high blood lead levels as children.

“It seems that the brain is rewiring to maintain function, and developing mechanisms to adapt to lead exposure, at least to some degree,” Cecil says.

The effects of lead exposure are difficult to disentangle from the effects of poverty. Stuart Shalat, director of the Division of Environmental Health at Georgia State University’s School of Public Health, points out that the nation’s aging infrastructure is making it increasingly difficult to protect kids from any number of environmental risks, particularly in poor communities. Shalat says that poor children are both most likely to be exposed to lead—from factory smelters, dust, soil and paint—and to suffer the worst effects of that exposure, thanks to poor access to health care and other resources such as proper nutrition and high-quality schools.

“We’ve known for 2,000 years that lead is toxic,” he says. “There should be a sense of urgency to evaluate and minimize any damage but it is increasingly clear that some of that toxic damage can be mitigated by common sense practices. The real problem is that the greatest burden generally falls on communities least equipped to deal with it, places that are already economically at the bottom of the food chain. What we need to focus on is doing everything we can to see that every child has the opportunity to develop to his or her potential.”

This article is reproduced with permission from Scientific American. It was first published on March 22, 2016. Find the original story here.

Left: A water collection device is handed out to citizens of Flint for testing contaminated water on January 23, 2016 in Flint, Michigan. Photo by Brett Carlsen/Getty Images

Ellen Ruppel Shell is author, most recently, of Cheap: The High Cost of Discount Culture and is co-director of the Graduate Program in Science Journalism at Boston University.