Hari Sreenivasan interviews Joanne Davies about her plans to trek across Antarctica and finish what Sir Ernest Shackleton started.

Next year marks the 100th anniversary of Sir Ernest Shackleton’s historic, ill-fated and ultimately failed expedition to become the first person to traverse Antarctica. Shackleton’s team was just 85 miles from the continent’s Vahsel Bay in 1914, when the ship became trapped and then crushed by thick pack ice surrounding the continent. After nearly a year spent on the ship, and a series of exploits to escape, he managed to save his entire crew despite dwindling supplies.

And though he never completed the journey, Shackleton’s leadership in the face of some of the most brutal conditions imaginable went on to inspire a generation of adventurers ahead of him.

One of those adventurers is Joanne Davies, who plans to honor her childhood idol by leading an expedition on skis to complete his historic route. If successful, she’ll be the first person ever to do so. The route will begin at the Weddell Sea, traverse the South Pole and end at the Ross Sea.

But the road ahead is a difficult one. NewsHour correspondent Hari Sreenivasan interviewed Davies recently about the arduous journey, which will require dragging 300-pound sleds filled with food and gear across more than 1,700 miles of icy plateaus. 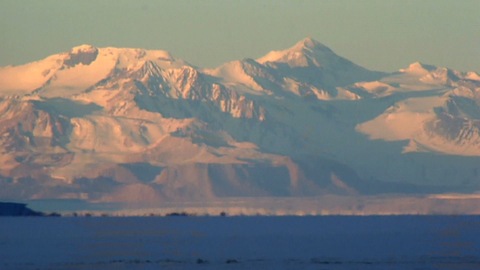 The team has been in Norway practicing their kite skiing — on which they will rely heavily during their journey — and dragging 50-pound tires attached to rope wrapped around their waists — to simulate carrying their immense packs.

All told, the trip is expected to take about 85 days. Along the way they will face treacherous terrain and temperatures below minus 50 degrees Fahrenheit. At those temperatures, exposed skin freezes in minutes.

Still, Davies hopes her latest challenge will be a fitting tribute to a man she grew up admiring. In our interview, she explained how Shackleton’s courage even in the face of failure helped shape her own career.

Photo credit: Joanne Davies is training to lead a trek across the Antarctic continent. Photo by NOVA.