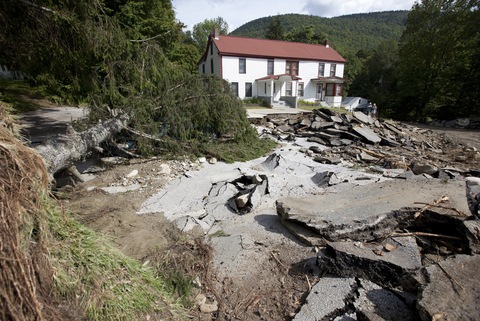 A tree lies fallen among rubble near a home outside Killington, Vt., on Wednesday, Aug. 31, 2011. Photo by Scott Eisen/Bloomberg via Getty Images.

As Irene battered the East Coast two weeks ago, Frank Lombardo knew that only after the rain and wind stopped and the floods receded, would his work begin.

That’s because as a forensic meteorologist, Lombardo is often called on to consult on legal and insurance cases resulting from violent storms. His job, and that of any forensic meteorologist, is to reconstruct the weather conditions that occurred at a specific time and location in question by retrieving and analyzing archived atmospheric data and re-creating a time line of meteorological events.

“As soon as something happens…whether there’s a catastrophic event or a minor localized event, forensic meteorologists understand things will quiet down, but in a few years from now, it will get into the courts,” says Lombardo, president of WeatherWorks, Inc. The Hackettstown, N.J.-based company provides meteorological expertise to public and private sector organizations, including the media.

Described as a combination of science, art and interpretation, forensic meteorology mirrors the work that detectives do to solve crimes. Cases may involve whether lightning sparked a fire or, if someone slips and falls, whether ice on a property was to blame. Data comes from various sources, including observations, weather stations at airports, Doppler radar and satellite imagery, National Weather Service bulletins, and even tidal gages. Forensic meteorologists may also take their own measurements, such as wind velocity. Cases are mainly site-specific, and much of the problem-solving involves knowing what synoptic, or generalized, data is needed to reconstruct the micrometeorology at a particular location.

In his Katrina inquiries, Wistar also discovered that “trees were very helpful” in solving cases. In areas of Mobile, Ala., where complete neighborhoods were torn apart, he often examined tree damage for clues about what caused property destruction. He knew the direction of the wind at various points in the storm, both before and after the storm surge, and therefore could determine which direction trees would have fallen at those same points. By noting fallen tree locations and directions, he determined time lines for property devastation, even when there were no structures left standing.

“Part of our job is to filter the data and understand what makes and doesn’t make sense,” Wistar says. But above all, “my job is to tell the truth.”

Another concern is the uptick in weather and related events occurring on a planet-wide basis, such as El NiÃ±o and La NiÃ±a. Generally, forensic meteorologists’ examinations are limited to a specific site. “If climate change continues to occur, however, and we see more worldwide events in increasing frequency, will that change how we look at local events? It may,” ponders Lombardo. He cites a global weather phenomenon, called atmospheric blocking, as an example of a planet-wide occurrence that is has already affected his forensic micrometeorology endeavors. Atmospheric blocking obstructs winds that come across the Pacific and forces them north into Alaska, Siberia and the North Pole. The winds then head south, “creating a pool of cold Arctic air that moves into the United States, providing a source for ice storms to develop,” he says. In the past two years, up and down the eastern seaboard, atmospheric blocking has directly led to snowfall in areas where heavy snow is uncommon, and consequently, “hundreds of slip-and-fall cases” have come across Lombardo’s desk. “[Atmospheric blocking] results in localized storms that produce the conditions that are favorable to generating future forensic work,” he says.

But the future holds other concerns — and opportunities — for forensic meteorologists. As Wistar notes, more people have migrated to regions on the planet “where the weather tends to be more dangerous,” such as the southern U.S. With more people in harm’s way, there will undoubtedly be more legal, insurance and engineering cases in which forensic meteorologists’ expert contributions will be vital.

This article is reproduced with permission from Scientific American. It was first published on September 12. Find the original story here.