When a predator is near, water fleas don their armor. Their bodies produce spikes and helmets to dissuade their attackers.

But in a new study, aquatic biologists at Ruhr University Bochum report that freshwater acidification, the progressive increase of acidity due to excess carbon in the environment, compromises the water flea’s ability to mount this defense. Moreover, their investigation shows that freshwater acidification may be catching up — and even surpassing — ocean acidification in a race that may harm essential parts of the food chain — like water fleas — and aquatic ecosystems on the whole.

What the scientists did: With the ongoing combustion of fossil fuels adding carbon into the atmosphere, aquatic biologist Linda Weiss wanted to learn if freshwater ecosystems fall victim to the same acidification as the oceans. Ocean acidification happens when excess carbon dioxide mixes with seawater, increasing the water’s acidity through a chemical reaction.

So Weiss looked to an organization in Germany that monitors drinking water quality of four reservoirs.

Using their data, which spanned from 1981-2015, Weiss calculated pCO2, a measure that reflects the carbon dioxide exchange between the lake and its environment, and from that, she derived acidity. Reminder: Acidity is measured in pH levels, with lower numbers signifying an increase in acid.

What they found: Over a 35-year span, their data showed a continuous increase in pCO2 in the lakes that was associated with rising acidification — pH levels decreased by 0.3. This rate is three times what has been measured in oceans since the industrial revolution. Weiss’ team found lakes are absorbing some CO2 out of the atmosphere, like oceans, but even more of this carbon pollution comes from emissions settling in soil and washing into freshwater.

Why it matters: Weiss wasn’t surprised. Scientists have speculated if the oceans are becoming more acidic as they absorb excess carbon dioxide, then freshwater may do the same. But Weiss’ findings exceeded previous predictions for freshwater acidification. For example, the dramatic increase in acidity she found over 35 years is equal to the levels expected in the Great Lakes in 2100 — 82 years from now.

Will wildlife suffer? Daphnia, water fleas, are tiny abundant crustaceans in freshwater rivers and lakes. Because many larger animals, like tadpoles, newts and fish, regularly snack on the water flea, they are an important link in the food chain.

“If they are harmed by any stressor, then this may have cascading effects for the rest of the community,” Weiss said. 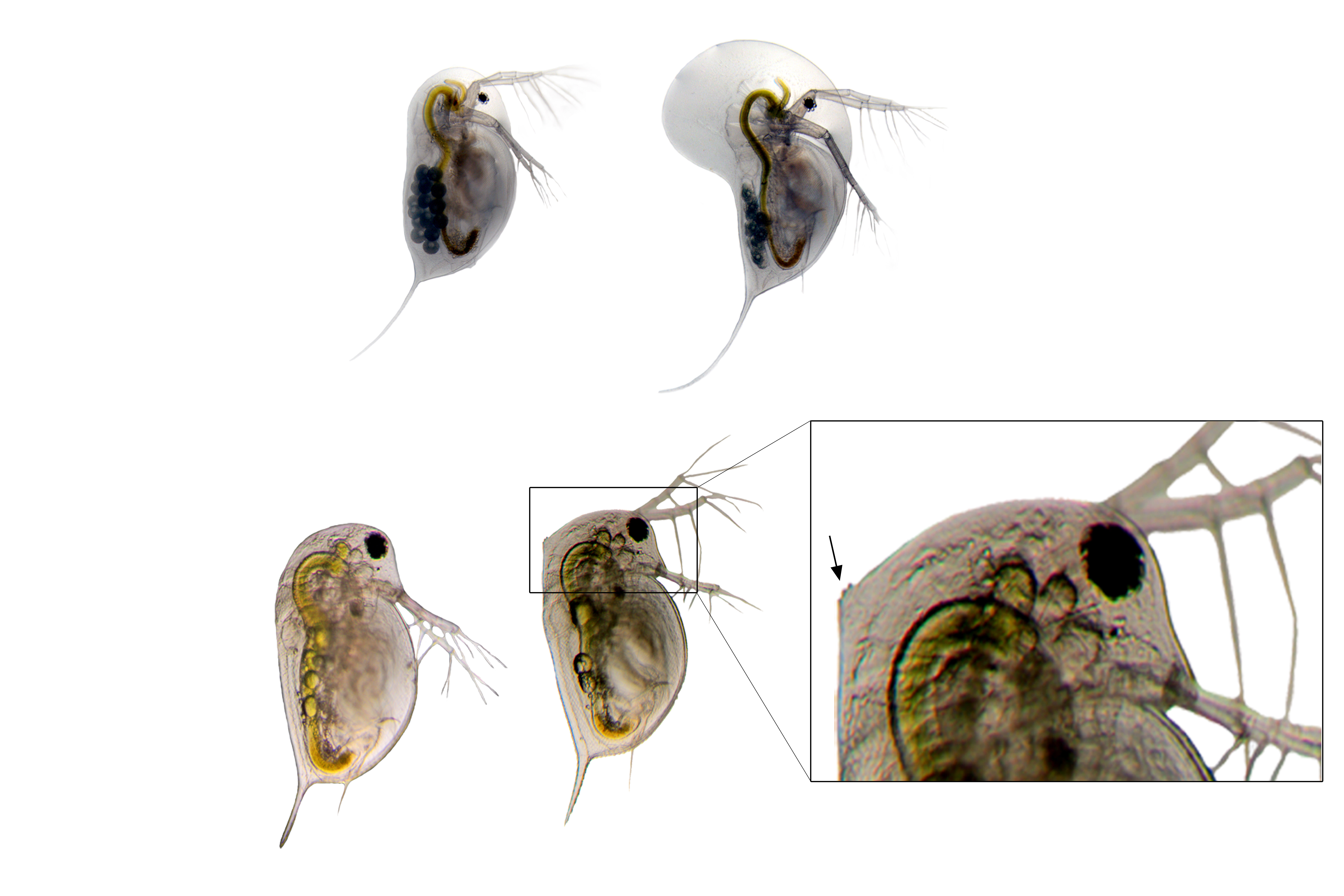 The Daphnia water flea dons its armor when a predator is near. The left images shows a water flea without its armor. The right images show a defended form with spikes or a helmet. Photo by Linda Weiss and Sina Becker

Weiss and her team designed an experiment water fleas in lab tanks were subjected to acidic waters that simulate future scenarios. They found that — much like crustaceans, invertebrates or tropical reef fish — increasing pCO2 levels weakens the water flea’s ability to defend themselves against predators.

“We are quite certain that this phenomena is globally valid,” Weiss said, but added that the full scope still will need to be assessed. Since lakes are getting warmer, Weiss also hopes to examine if temperature and CO2 interact to influence aquatic life in freshwater habitats.