From Gulf Oil Well to Landfill: The Journey of a Tarball 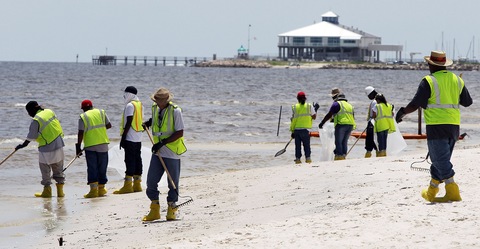 Tarballs, the marble-like bits of oil that have been washing up on Gulf of Mexico beaches since May, have become one of the most visible byproducts of the oil disaster — they’ve hit every Gulf Coast state.

But the sticky gobs of weathered oil aren’t new — they have been a nuisance to beachgoers since the mid 1950s, says National Oceanic and Atmospheric Administration scientist Alan Mearns. Natural oil seepages were the primary source of tarballs before commercial shipping began contributing to oil sheens in the ocean. By the 1980s, Mearns says, shipping and natural leaks equally contributed to the amount of tar in oceans.

With the Gulf oil leak, the tarballs have been arriving in greater quantities than before.

On his first trip to the Gulf after the oil hit, President Obama bolstered the recognition of tarballs when he plucked one from the sand of Fourchon Beach in Louisiana.

“These are the tarballs that they’re talking about,” he said, with one pinched between his fingers.

The president dropped the ball of oil back on the beach where it would sit until a cleanup crew disposed of it, capping the nearly month-long journey and transformation that brought that tarball to rest on the beach.

NOAA scientists Alan Mearns and Glen Watabayashi explain how a Gulf tarball comes into being:

Formation | It takes a month or two for a tarball to form from oil. The process is called weathering, which begins when some of the lighter components of the oil evaporate, leaving behind the heavier stuff. The remaining heavy oil mixes with seawater and begins to look like yogurt, Watabayshi said. As the newly formed slick is bombarded by waves and gusts of wind, it breaks apart into smaller and smaller portions, and the small globs of oil develop a crusty exterior. Those small globs are tarballs.

The tar that forms is similar to asphalt, Mearns says. Like an asphalt road, tarballs are deep black and get sticky when exposed to the sun or high temperatures.

“Probably the largest tarballs, the hardened tarballs, are the parking lots that our cars are sitting on right now,” Mearns said.

Travel | After the Gulf oil leak began, the weathering process continued in the open ocean for a month, giving the oil enough time to break apart and form tarballs. Then the winds shifted and the ocean currents carried the tarballs onto coastal state shorelines.

At sea, the tarballs are spread out enough that they’re not too noticeable. But once they wash up on land, they’re hard to miss.

“Out at sea, you might get one dime-size tarball per ten square meters” said Watabayashi, a lead physical oceanographer for NOAA. “But when they come on the beach, they’ll pile up and accumulate — and then you see them.”

Cleanup | Mearns says that most tarball cleanup is done manually, by hand or with shovels.

The Gulf crisis has also spurred adaptation and innovation. The Shake’n Fork was once marketed for manure cleaning — now, some crews use the motorized sifter to capture tarballs.

Supertanker captain Gerry Matherne invented the Heavy Oil Recovery Device, a contraption he initially called the Tarball Retrieval Device. It’s composed of a 3-by-3-aluminum frame and a deep net that is trolled in the water to collect heavy waste, including tarballs.

Finally, bulldozers or tractors can be called in if the amount of tarballs is overwhelming for a manual cleanup crew.

Disposal | After it’s removed from beaches, oil waste is sent to staging areas where it’s sorted by workers. According to the Environmental Protection Agency’s Waste Management Plan, workers label the oil waste and coordinate delivery to a disposal site.

Heritage Environmental Services, which is running staging areas in Louisiana, declined to comment on the specific procedures.

But the Environmental Protection Agency has cleared tarballs for disposal at state-permitted landfills, along with the typical waste a landfill handles. That’s because tarballs are less toxic then freshly spilled oil, Mearns says — time and the weathering process reduce their toxicity.

“The biggest problem with tarballs is their stickiness to things: to people’s feet, to birds’ beaks and feathers; that’s where the primary concern is with tarballs,” Mearns said.

Over time, Watabayashi said, he expects the number of tarballs arriving on Gulf Coast beaches to dwindle, but he doesn’t know to what level they will return.

“I wouldn’t be surprised if six months from now tarballs from the spill are found on a Gulf beach.”