Geneticists crack the 20-year mystery of the Kennewick Man skeleton

The Kennewick Man, once described as North America’s most important skeleton, has finally found its kin. New DNA evidence says this fossil is most closely related to modern-day Native Americans, closing the loop door on a 20-year debate that has caused legal battles between scientists and tribes.

The 8,500-year-old remains of The Ancient One, as the skeleton is sometimes called, were found July 1996 by two college students wading through a shallow section of the Columbia River near Kennewick, Wash. After the discovery, a local group of Native American tribes tried to have the skeleton buried under the Native American Graves Protection and Repatriation Act, which permits such action if Native American human remains are found on federal land or if familial ties to a tribe can be established. Scientists, however, cried foul and filed an injunction to keep the Kennewick man out of the ground. Led by Doug Owsley, a physical anthropologist at the Smithsonian Institution’s National Museum of Natural History, they argued that the shape of the skeleton’s skull more closely matched Polynesians or the Ainu, an indigenous group from northern Japan. And it didn’t stop there.

“Some other people argued that [Kennewick man] has Caucus traits, so he could be related to Europeans,” said geneticist Eske Willerslev of the University of Copenhagen, during a press briefing on Wednesday. Willerslev led the new study published today in Nature.

For this research, Willerslev and his colleagues extracted DNA from 200 milligrams of tissue in the skeleton’s hand — that’s approximately seven thousandths of an ounce of biological material. Back in the mid-1990s and early 2000s, other scientists tried to collect genetic material from The Ancient One, but they all failed. 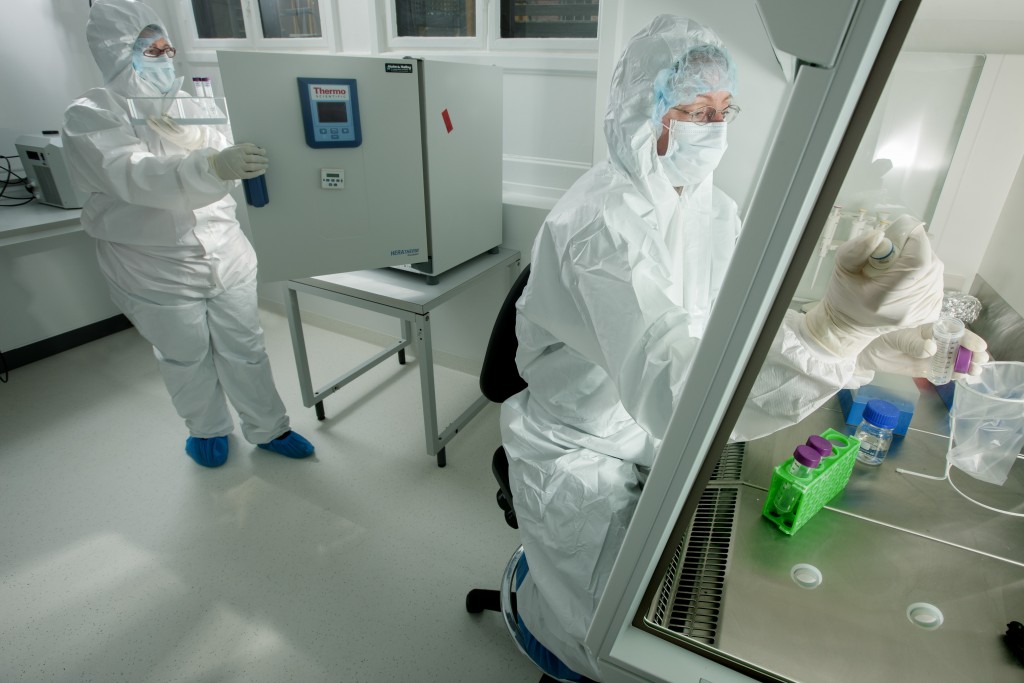 DNA work at the GeoGenetics lab where the Kennewick Man’s genome was sequenced. The lab is part of the Natural History Museum of Denmark and the University of Copenhagen. Photo by Mikal Schlosser

“Technology since then has improved quite a lot. That’s really the main driver. We can now get information out of shorter pieces of DNA, and given the very degraded DNA in the Kennewick man, that’s absolutely key in addressing these questions,” said co-author and geneticist Morten Rasmussen of the University of Copenhagen. Because of the DNA damage, the team could only obtain one full copy of the genome — that’s known as 1X coverage. In the early days of DNA sequencing, scientists aimed for 7X or 8X coverage to feel confident about the validity of a mammalian genome, but recent work by Willerslev’s team shows that human ancestries can be traced with as little 10 percent of a genome.

The team isolated the full genome of the Kennewick man and compared it to DNA sequences from across the globe, including those from ethnic groups like the Ainu and Polynesians. They also looked at Kennewick man’s relationship to the Native American Colville tribe, whose members were involved in the legal battle. Members of this tribe submitted DNA samples as part of the study. The investigation wasn’t funded by any tribes or American groups, rather it received sponsorship from two European organizations: the Danish National Research Foundation and the Lundbeck Foundation.

Because very few Native American families have been sequenced, it may be impossible to trace the skeleton to a specific tribe, Willerslev said, but “we can conclude that he’s most closely related to contemporary Native Americans.”

The geneticists also partnered with a group of anthropologists to investigate why the Kennewick man was originally mistaken for Ainu and Polynesian.

The team of anthropologists concludes that you can’t actually associate an individual to a certain population if you only have a single individual from a certain time in a certain spot, Willerslev said.

The U.S. Army Corps of Engineers maintain legal custody of Kennewick Man’s skeleton, which is housed in private storage at the Burke Museum in Seattle, Washington, and according to Science Magazine, they will now explore whether or not to return the remains to Native American tribes.

Next week, PBS will explores Humankind’s First Arrivals and the Kennewick man as part of a five-part series called FIRST PEOPLES