Will geoengineering to cool the planet harm crops?

As Earth’s temperature steadily climbs and international action to curtail heat-trapping greenhouse gases falters, climate change poses such a dire threat that scientists are now seriously investigating geoengineering as a last-ditch attempt to cool the planet.

But deliberately manipulating Earth’s climate could obviously have unintended consequences, so “it’s very important that we study it before anyone tries to use it,” said Solomon Hsiang, a professor of public policy at the University of California, Berkeley. “We should know what we’re getting ourselves into.”

Hsiang and his team used two massive volcanic eruptions—Mount Pinatubo in the Philippines in 1991 and Mexico’s El Chichón in 1982—as analogues for solar geoengineering.

Hsiang and a team of researchers aimed to find out with a new study that looks at how one type of proposed geoengineering—injecting tons of tiny particles into the atmosphere to deflect sunlight and shade the planet—would affect a very important system: agricultural crops.

It even offers the additional benefit of scattering the sun’s rays, creating the kind of diffuse light that many plants tend to prefer. But there is a potential snag: Plants would receive less light overall for photosynthesis. What remains unclear is which effect wins out, and so whether such geoengineering would ultimately hurt or help agriculture. Hsiang’s new study, published Wednesday in Nature, attempts to determine the overall effect.

Hsiang and his team used two massive volcanic eruptions—Mount Pinatubo in the Philippines in 1991 and Mexico’s El Chichón in 1982—as analogues for solar geoengineering. Both eruptions shot millions of tons of sulfur dioxide into the atmosphere, where the gas became sulfate aerosols that blocked sunlight (somewhat akin to what solar geoengineering could do). Mount Pinatubo’s sulfate aerosols cooled the entire Earth by about 0.5 degree Celsius for almost two years. 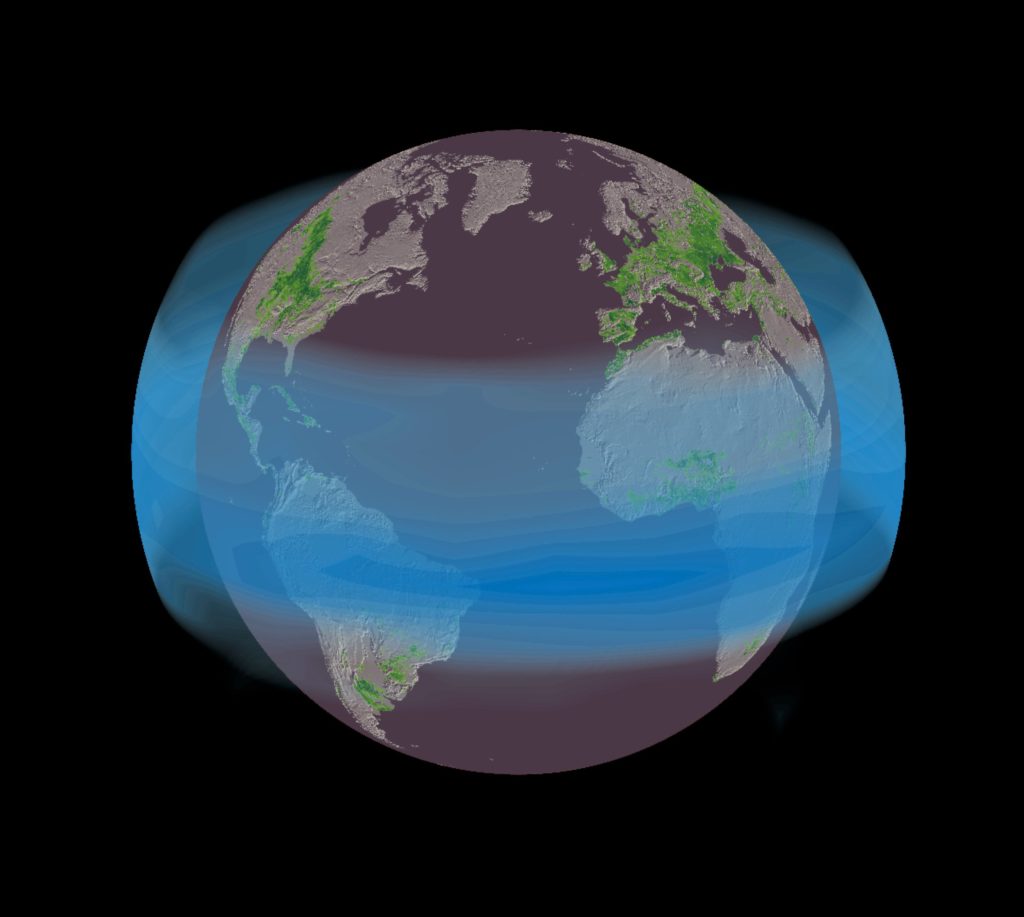 A veil of stratospheric sulfate aerosols circles the Earth in the months following the massive 1991 eruption of Mount Pinatubo. These aerosols cooled and shaded the Earth’s croplands, shown in green. Image by Jonathan Proctor and Solomon Hsiang

The team analyzed global satellite data from both eruptions, along with crop yields for corn, soy, rice and wheat in 105 countries from 1979 to 2009. The researchers specifically wanted to measure how dimmed sunlight from the eruptions had influenced crop growth, so they calculated out the effects of other variables like rainfall.

They found changes in sunlight due to Pinatubo had reduced crop yields whereas El Chichón caused less such harm (although that eruption was not as well measured as Pinatubo, a factor that could skew these findings). Pinatubo’s dimming effect cut global corn yields by an average of 9 percent, and soy, rice and wheat by 5 percent. The results were a surprise because scientists had expected the resulting light diffusion to be more beneficial for the crops, Hsiang said.

The team combined its historical analysis with a global climate model to predict crop yields on a future, hotter planet—with and without solar geoengineering. They found that with geoengineering the reduced sunlight decreased crop yields enough to offset any potential gains from cooler temperatures.

“We’re not saying that geoengineering harms agriculture on net. What we’re saying is that it doesn’t help agriculture,” Hsiang said. “Before us, many people had said that this could be a way to save agriculture—you could geoengineer the climate to prevent it from getting hot, so you don’t have crop failure. We point out that when you do that, you shift the crop losses from being caused by heat to being caused by [less] light.”

Some experts who were not involved in the study say its conclusions should be interpreted cautiously. “This is a good effort, but we have a very limited amount of data over a limited time period to make these estimates,” said Douglas MacMartin, a senior research associate in mechanical and aerospace engineering at Cornell University.

“One shouldn’t take the conclusions as, ‘This is what would happen if we did solar geoengineering.’” David Keith, a professor of applied physics at Harvard University, expressed deep skepticism about using volcanic eruptions as an analogue for the practice. “Geoengineering would alter the climate in a very different way than the way a volcanic eruption does,” he said. For one, geoengineering would involve a repeated infusion of aerosols, compared with the “sudden shock” of a volcanic eruption; that sustained presence of aerosols, he said, would create different cooling dynamics than the volcano and thus affect other aspects of the climate—such as precipitation—differently.

Alan Robock, a professor of climate science at Rutgers University, also points out agricultural technology and techniques change over time. It’s not clear, he said, “whether these results would be applicable in the future if we ever do geoengineering.”

Despite their critiques, these independent experts acknowledge it is critical to conduct studies of geoengineering and its potential consequences.

“It is important to do this research so we understand and quantify all the risks. Some people argue you shouldn’t do this research. But we might find out that geoengineering is not a good solution at all,” Robock said. “The sooner we know that, then there might be a greater push to mitigate climate change—because we do not have a ‘get out of jail free’ card.”

This article is reproduced with permission from Scientific American. It was first published on July 25, 2018. Find the original story here.