How global warming leads to tiny horses and other shrinking mammals

When the Earth gets warmer, mammals start shrinking. That’s the takeaway drawn from a collection of 53.7 million-year-old teeth discovered in Wyoming’s Bighorn Basin, described Wednesday in the journal Science Advances. These dental records depict a new, consistent trend in the fossil record: ancient animals drop in body size in response to rapid global warming, which may serve as an omen for the immediate future of humans and wildlife.

“It’s important to keep in mind that these organisms had at least 10,000 years to adapt to these global climate change events,” University of New Hampshire paleoclimatologist Abigail D’Ambrosia, who led the study, said. “Today, we’re warming and pumping CO2 into the atmosphere at 10 times the rate of these ancient global warming events.”

Bighorn Basin sits 80 miles east of Yellowstone National Park, under the gaping Wyoming sky. The basin is a geologic time machine due to a bevy of well-preserved plant and animal fossils. And since 2010, D’Ambrosia has spent summers walking along the bases of the basin’s slopes and hills in search of shiny teeth.

“That’s because just like humans, animals have enamel — and that is incredibly resistant to weathering and breakdown over time,” D’Ambrosia said. “It turns out that in adult mammals that tooth size is proxy for body size.”

Her exploration focused on teeth from the late Paleocene through the early Eocene, when over the course of millions of years, greenhouse gases caused a series of three global warming events called hyperthermals. 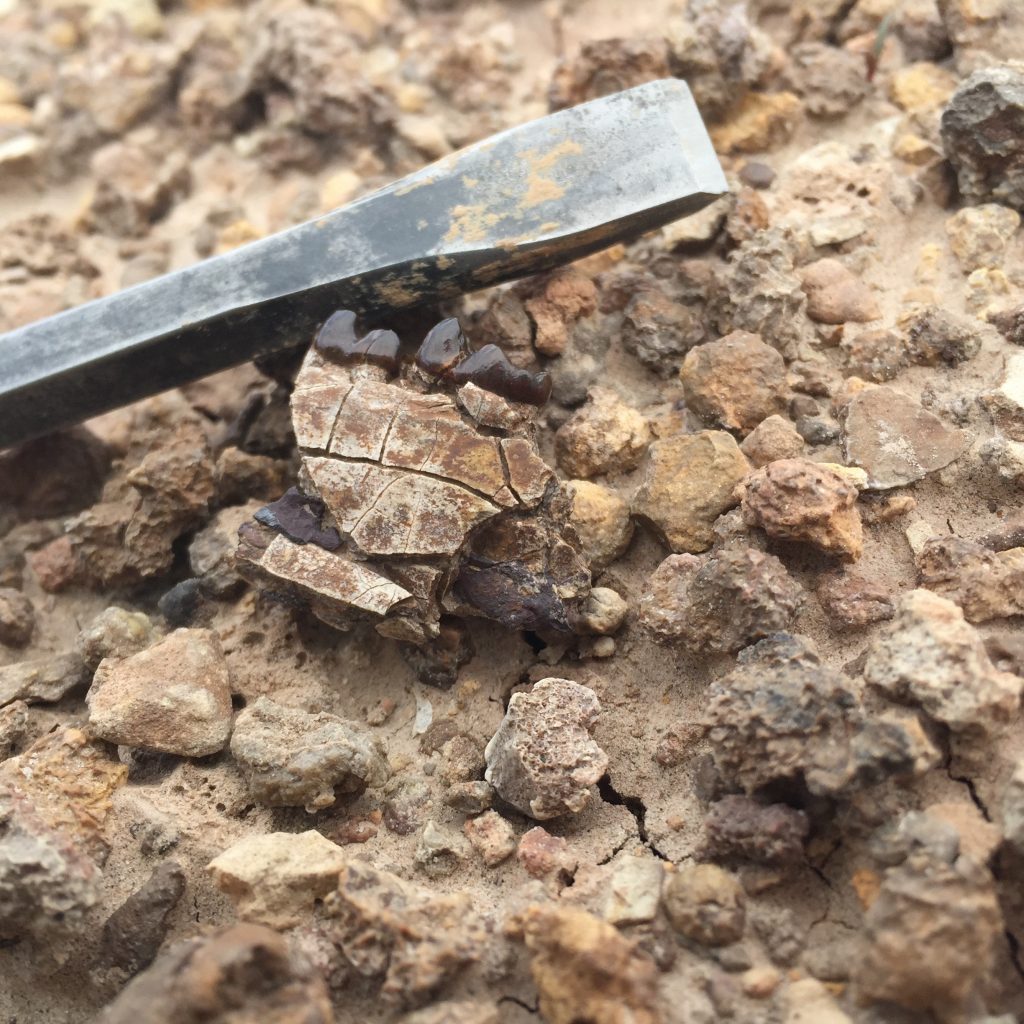 Arenahippus equid (horse) jaw fragment (with second and third molars), as discovered in field. For scale, the tip of the chisel is about 1 centimeter wide. Photo by A. D’Ambrosia Carroll

The first and biggest of the hyperthermal trio — the Paleocene-Eocene Thermal Maximum — started 56 million years ago and increased global temperatures by 9 to 14 degrees Fahrenheit over at least 10,000 years. This period lasted 180,000 years and corresponded with a dramatic drop in body size for Earth’s mammals, based on what researchers could gather from teeth collected at Bighorn Basin. One 2012 study recorded a 30 percent reduction for Sifrhippus horses — the Earth’s earliest species of the hooved animals.

But was this dwarfing of mammals a one-off occurrence or indicative of pattern related to global warming?

“We didn’t know whether or not there was some threshold,” said University of Nebraska vertebrate paleontologist Ross Secord, who led the 2012 investigation. “Maybe you needed to get up to a certain magnitude of warming or CO2 in the atmosphere, before this would happen?”

She and her colleagues examined both the size and chemistry of teeth from another ancient horse species, Arenahippus pernix. The team found Arenahippus’ body size shrank by 14 percent. Plus, temperatures during the Eocene Thermal Maximum 2 rose half as much as the earlier warming period, which suggests dwarfing parallels the magnitude of global temperature rise. 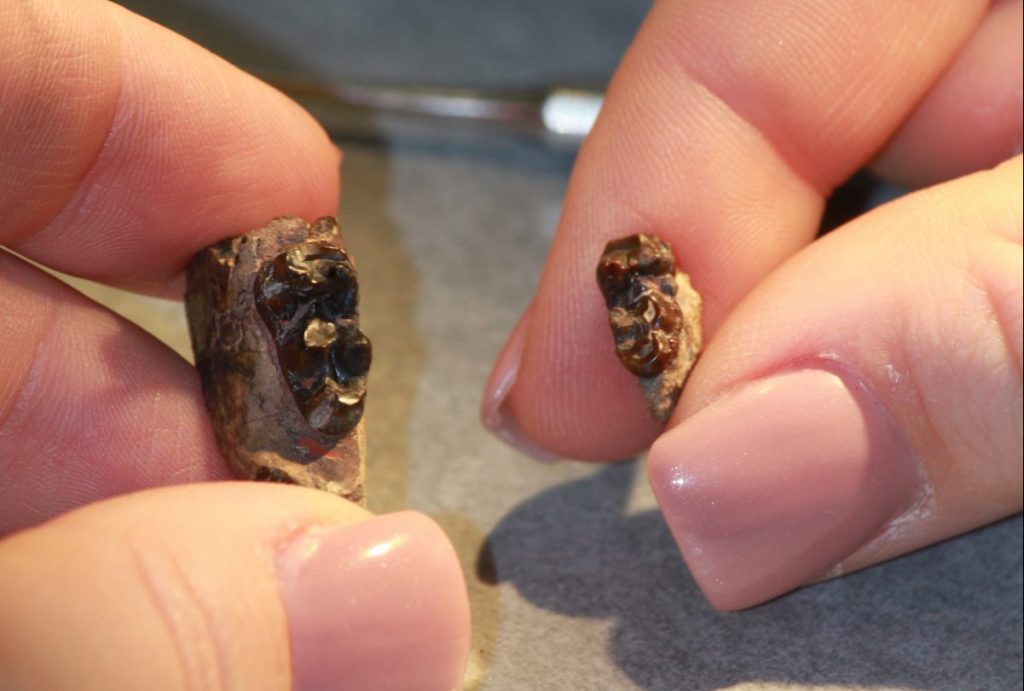 “The implication is during these intervals of climate change that there is something happening in the ecosystem which is making these animals get smaller,” said Secord, who wasn’t involved with D’Ambrosia’s study.

An Anthropocene for pipsqueaks

If you’re familiar with Bergmann’s rule, you know the concept of a relationship between temperature and mammal size is an old one. The rule states size of animals within a single species can sometimes vary based on temperature — namely, colder environments lead to bigger animals and vice versa. Red foxes, for instance, are smaller closer to the equator than in higher, colder latitudes.

“This essentially has to do with being able to cool off or retain heat efficiently,” D’Ambrosia said. “If you are a smaller organism, you have a higher surface area to volume ratio; therefore, you can lose heat and stay cool more efficiently. The opposite is the case if you have a larger body size.”

Bergmann’s rule may be behind the body size decline during these ancient warming events. Other evidence suggests elevated CO2 levels and greater warming can reduce the nutritional content of plants. Drought and wildfires may exacerbate this problem by decreasing nutrient availability in the soil. Less nutrition in food makes it harder for animals to bulk up.

Humans, with our climate controlled-environments and hearty food supplies, will likely be spared mammal dwarfing with current global warming. Wild animals may not be so lucky.

Whatever the case, modern animals might already be feeling the stress. Soay sheep in Scotland, red deer in Norway and California squirrels have exhibited changes in body size due to ongoing climate change.

“We know from historical records for the last few decades that there is evidence that mammals and birds already are beginning to show a similar effect. They are getting smaller,” Secord said. Forty percent of mammals he examined in the Paleocene-Eocene Thermal Maximum study shrank in size.

But whereas ancient hyperthermals required thousands of years to reach peak heat, modern Earth may reach the same point within a century or two. Business-as-usual climate predictions argue for a 10 degree Fahrenheit increase in global temperatures by 2100.

Humans, with our climate controlled-environments and hearty food supplies, will likely be spared dwarfing with current global warming, D’Ambrosia and Secord said. Wild animals may not be so lucky.

“They have less time to adapt to the climate change than they had in the past during these global warming events,” Secord said. Plus, “there were no big barriers to them moving north or south. But now we have lots of human barriers. So we may see a lot more extinction associated with modern warming than we do with these ancient events.”

Left: Field location within the McCullough Peaks region of the Bighorn Basin where scientists discovered evidence of mammal dwarfing caused by global warming. Fossil teeth are often found eroding out of the hills and slopes here. Photo by A. D'Ambrosia