How Many Wind Farms Are in the Works for the U.S.? 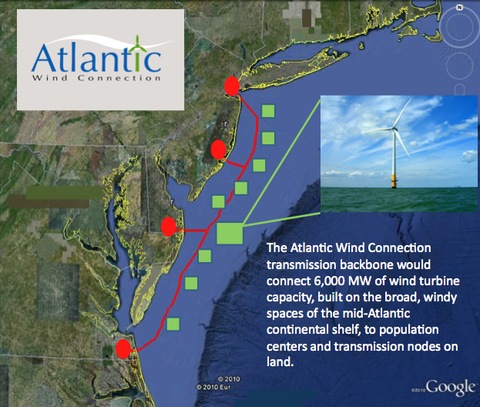 Search engine giant Google announced Tuesday that it will invest in an enormous new project to build an undersea transmission line off the mid-Atlantic coast that could bring energy from offshore wind farms to as many as 1.9 million households. 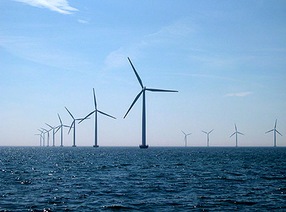 Right now no offshore wind farms exist in the U.S. — though several are in the planning stages. How many?

In September, the National Renewable Energy Laboratory in Golden, Colo. published a report PDF on the state of offshore wind power in the United States that gathered, among other things, a list of the offshore wind projects in the U.S. that have begun to move through either a state or federal permitting process. (Projects built within three miles of shore are in state waters and under the jurisdiction of individual states; projects built further out would be in federal waters and under the jurisdiction of the Department of Interior’s Bureau of Ocean Energy Management).

The project that’s furthest along is Cape Wind, off the coast of Cape Cod in Massachusetts. In April, after nearly a decade of legal wrangling and setbacks, the Department of the Interior issued the project a commercial lease allowing construction to begin. Developers hope to have it up and running by 2012.

About a half-dozen other potential wind farms in federal waters have been offered “interim limited leases” to begin preliminary site research, according to the report. The interim leases allow companies to put up meteorological towers to measure things like wind and wave speed and direction.

Of the above projects, only the one in Delaware has moved beyond initial surveys and begun the process of seeking a federal commercial lease.

There are also projects in preliminary phases in state waters in Massachusetts, Rhode Island, New Jersey, North Carolina, Texas, Ohio and New York. Of this, the Texas project is the largest and furthest along — Texas has awarded four leases in its waters, and a company called Coastal Point Energy has said it is aiming to begin construction on a 63-turbine, 300 Megawatt wind farm off the coast of Galveston this year.

The graphic below shows the locations and capacity of the projects that have begun advancing through the permitting process: 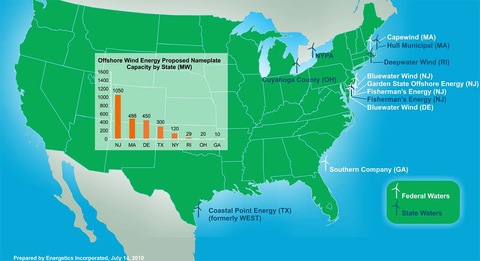 So what effect will the Google announcement have on these proposals, particularly the mid-Atlantic ones? Until now, any proposed wind farm has had to include in its plans a way to build its own connection to land.

“If someone else has figured out for you how to tie into shore, and you can tie into the existing trunkline … It obviously makes that process much easier and as far as the development of your individual project,” Firestone says.

None of the mid-Atlantic projects that have begun the permitting process are likely to be completed before 2014 or 2015, says Firestone. They might end up having the option of tying in to the new transmission line, or they might still build their own connections to shore.

On Tuesday, officials with Bluewater Wind told the New York Times that the transmission line was “an interesting idea, in part because it would foster development of a supply chain for the specialized parts needed for offshore wind.”

Either way, Firestone says, “I suspect we’re going to have a lot more projects after those initial ones. Ultimately the transmission line won’t depend on whether those early ones tie in […] It could be mutually beneficial, but it’s not a requirement for either.”

Overall, wind energy experts say the transmission line would be a key step forward for offshore wind — allowing individual wind farms to more efficiently transmit energy up and down the East coast where it is needed.

“Right now this is probably one of the biggest pieces of infrastructure that has been proposed for offshore wind in U.S.,” said Walter Musial, a principal engineer at the National Renewable Energy Laboratory in Golden, Colo. and a co-author of the NREL report. “This precedes a lot of the wind energy offshore development that we expect to take place over the next couple of decades.”