Coral bleaching is killing reefs. Is the answer a great migration?

HAMILTON, BERMUDA — “So, the sub is going to tip forward, that’s normal. Then it’s going to roll on its back, just tip back a little bit, that’s also normal. Here we go!”

That’s my co-pilot Kelvin Magee. The two of us are barefoot inside the Nomad, a two-person submersible. The captain shouts orders as the crew work cranes and levers.

Divers paddle nearby, ready to guide our path or rescue us. Everyone is tense because the water is choppy. One wrong wave could toss the 7,000-pound Nomad into the ship’s stern. Magee, a member of the Nekton mission, flips a switch, and our four-hour journey to the seafloor begins.

Then the ocean swallows us. The submersible drops 110 feet in four minutes, as the sunlight fades. Rather than feel suffocated by claustrophobia, the opposite happens. The dwindling sunrays reveal a welcoming expanse, full of tranquility.

As we descend, my mind drifts to the corals below and their collective fate around the world. Many creatures will lose against global warming, but coral reefs are exceptionally vulnerable.

The Nekton Mission is an alliance of 30 organizations conducting the longest seafloor survey in history. Think of it as a physical exam for the ocean. Future groups will be able to use the mission’s baseline findings to chart how oceans will respond to human-made threats like global warming. The project is sponsored by XL Catlin, a global insurance company from Ireland that has sponsored similar environmental surveys since 2009. None of the work is proprietary, and the data are open access so other researchers can use them.

Nekton scientists will coast through the Gully Marine Protected Area, a large underwater canyon near Nova Scotia, and will explore the swirling gyre of the Sargasso Sea.

It is day 16 of the mission, and Alex Rogers, Nekton’s chief scientist and an Oxford conservation biologist, is diving in a twin submersible called Nemo. The plan is to plunge 850 feet at Tiger, a site off southeast Bermuda.

“This place is called Tiger because of tiger sharks, so who knows, you might even see one of the ocean’s spectacular predators while you’re down there,” Rogers had said earlier that morning at a prep meeting aboard the Baseline Explorer, a 150-foot research vessel. Shipping containers littered the deck. Some contained diving supplies for the volunteers from Project Baseline, a global citizen science initiative of 10,000 underwater explorers. Other containers housed fully equipped labs. 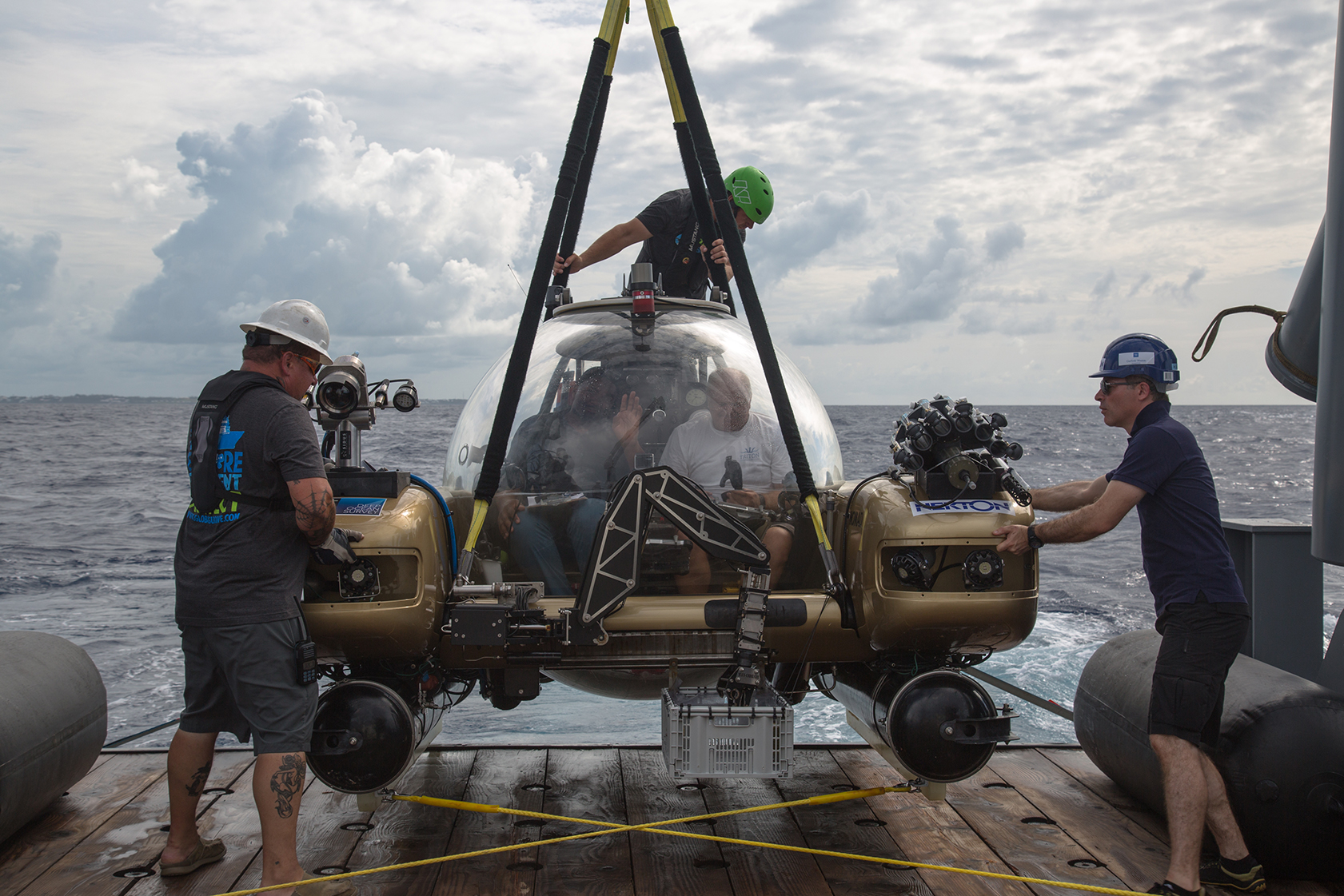 ScienceScope joined Nekton on this voyage to answer an important question: More than a third of the planet’s reefs are threatened by climate change, but can they adapt?

The Great Barrier Reef raised this question early last year. The entire reef didn’t die despite what you may have read in a viral fake report in Outside Magazine. Yet in 2016, a 435-mile portion of the northernmost section of the Great Barrier Reef suffered bleaching — the largest event on record — and 67 percent of the coral in that area died. Bleaching events covered the central and southern reef in 1998 and 2002, meaning the majority of Great Barrier Reef’s 134,000 square miles has suffered massive bleaching in the last 20 years. If total death were to strike Great Barrier Reef — the world’s largest coral reef ecosystem — Australia’s economy would lose $5.7 billion.

“People don’t realize the thing we’re trying to keep alive is the size of Italy,” Brett Lewis, a marine researcher at Queensland University of Technology in Brisbane, told me via phone. Lewis studies the mechanics of coral bleaching — how it happens step by step.

The coral respond by expelling the algae — and it can be violent! When Lewis and colleagues exposed Heliofungia actiniformis, a mushroom coral, to extended periods of heat in a lab tank, the critters responded by expanding and contracting like balloons during the algae eviction.

“Imagine you or I just sitting there, and all of a sudden our tissue inflates to 340 percent of our current size,” Lewis said. “This expansion is very new. This is the first time that it’s been documented in coral bleaching.”

However, it won’t be the last. Coral can recuperate from bleaching, once temperatures drop and algae populations recover. (The coral in Lewis’ experiment recovered and are alive today).

But elevated sea temperatures caused by global warming mean algae and coral may have less time to recover between bleaching events. That’s why coral died in droves when El Nino hit the northern Great Barrier Reef in early 2016.

Take a closer look, and a pattern emerges. The worst carnage tends to involve coral in shallow water, which is a trend seen across the globe. So far, one-fifth of the world’s shallow water reefs have perished, according to a report by the Global Coral Reef Monitoring Network. Rogers and others predict mass bleaching events, once decadal events, will happen once or twice a year for most shallow water coral by 2050.

A dire prediction, unless of course, the coral pick up and leave.

As Nemo and Nomad plunged deeper into the Atlantic, the blue deepened as seawater more readily absorbed the reds, oranges and yellows in the sunlight. Picture the shades between dead of night and predawn, and you’ll know the color.

We had ventured into the mesophotic zone — a colder, more thermally stable region that might serve as a refuge for corals affected by bleaching.

Located 131 to more than 500 feet underwater, this twilight zone escapes the warming waters and other anthropogenic threats like waste runoff, which tend to pool near the sea surface. Most mesophotic coral reefs are left over from 18,000 years ago on continental slopes, when sea level was 400 feet lower than today. Unlike surface corals, mesophotic species are a mixture of those dependent on algae and corals that feed on other sea creatures.

All corals start as little larvae that get swept around by currents, before attaching in a single spot. So, scientists like Rogers are investigating reef connectivity — the extent to which shallow water reef species exist in the mesophotic zone too. Mesophotic reefs could function as migration stations for shallow water coral and fish during times of crisis, which is known as the deep water refugia hypothesis.

The submersibles are equipped with filming equipment, so the researchers can document the biodiversity. Each has a low-power laser that serves as an underwater ruler. By pulsing into the seafloor, the laser judges physical perspective so the team can measure the sizes of fish and corals.

A five-foot-long dog shark whipped from behind a natural bridge, and then darted away. His departure raised a question: How does this survey grasp the habitat’s full diversity when so many creatures skitter off?

The answer is environmental DNA. Rogers explained the concept, via radio, as Nemo cruised next to us at an 850-foot depth.

“The idea is when there are animals and other organisms present in the environment, they release cells,” Rogers said. Skin cells, scales and poop gets left behind, with DNA packed inside. Imagine if you put your hand in a big glass of water, and a few cells fall off your hand. Scientists can take that water and sequence it. A set of long plastic bottles hang off the Nomad’s bow for this purpose.

Later, the biosurvey data will be amassed and shared among Nekton’s research team. Gretchen Goodbody-Gringley, a reef ecologist at the Bermuda Institute of Ocean Sciences, collaborates on the project. While Rogers and I coasted along the seafloor, Goodbody-Gringley and a team of Project Baseline divers conducted similar surveys closer to the surface.

“Alex formerly worked in deep corals and has moved up to mesophotic, whereas I started in shallows and have moved down to mesophotic,” Goodbody-Gringley said. “So in a sense, we’re converging.”

The divers double-hosed tanks look like a Jacques Cousteau invention, but the equipment is actually a state-of-the-art rebreather system that recycles the air that they exhale. It permits extra long dives, which are helped by fan-powered scooters.

Divers aboard the Baseline Explorer.

“If we were to do only the 300-foot transects and come straight up, we would have to decompress for about three hours,” Todd Kincaid, Project Baseline director, said later on the ship’s deck. But with the scooter, the divers can travel at 1.5 miles per hour and follow the gentle slope of the sea floor, as they collect observations at a 300-, 200-, 100- and 50-feet-depth. The process take close to three hours, so they can decompress while they work.

Together, the environmental DNA sequencing and visual surveys offer a broad picture of Bermuda’s biodiversity and the connectivity between shallow and mesophotic habitats.

So, that’s it? Mesophotic corals to the rescue! Not so fast.

“We still don’t really know where all of these reefs are, what lives there, and how these communities function,” said Daniel Holstein, a coral reef ecologist at Duke Marine Lab who is unaffiliated with Nekton.

Gretchen Goodbody-Gringley, a reef ecologist at the Bermuda Institute of Ocean Sciences. Photo by BIOS and Ocean Support Foundation

Yet in some areas, deep and shallow corals aren’t connected by ocean currents, so larvae migration might be naturally impossible. Researchers are thinking about rearing certain types of coral in a lab and the reintroducing them into mesophotic zones. But first they need to know where species can already survive. Yet it’s clear some shallow water species — elegant, lanky elkhorns — can’t make the migration, Holstein said. They rely too heavily on algae and sunlight.

Such is the case in the Caribbean, said University of the Virgin Islands coral reef ecologist Tyler Smith. A 2005 bleaching event and disease have imperiled the diversity of surface-hugging corals. Elkhorn and staghorn corals have declined precipitously, Smith said.

His team reported last year that mesophotic reefs near the Virgin Islands are also susceptible to bleaching. Due to the shape of the seabed, ocean currents can force warm surface water downward, putting mesophotic corals at risk during heat waves. The observation suggests that the deep reef refugia hypothesis may only apply on a location by location basis. Prior observations in the eastern Pacific near Panama found mesophotic fire corals had repopulated shallow regions after multiple El Nino events devastated populations. Fire corals near Panama, for instance, were wiped out for 2,500 years at one point and then returned.

Smith feels the hypothesis needs an edit. It isn’t that cold and deep versus warm and shallow dictate coral survival. It’s the change relative to the regular temperature.

“What you really need to have are environments that stay consistently cool relative to their average conditions,” Smith said. So if coral have already adapted to repeated temperature fluctuations in a particular area, then those reefs may persist through future climate change. Hence why Goodbody-Gringley, Rogers, Nekton and leagues of ecologists are scurrying around the globe in an attempt to identify which coral ecosystems are most vulnerable.

As Nemo and Nomad depart the seafloor, the coral forests fade into the background, but the scientists’ concerns remain. The submersibles race our air bubbles to the surface. I bid farewell to the sea cucumbers and slipper lobsters. Our sub’s dome breaches. Reality returns.

Matt Ehrichs is a general assignment producer for the PBS NewsHour. He is also co-creator of the award-winning web series, ScienceScope. Before joining the broadcast and digital production team, Matt provided mentor and creative support to the next generation of storytellers with the PBS NewsHour Student Reporting Labs.