By the Numbers: The Oil Spill and BP’s Legal Troubles

The Gulf Oil Spill of 2010 captured the world’s attention with the scale of its destruction. It polluted the waters of the Gulf of Mexico with millions of barrels of oil; shut down businesses, fisheries and beaches; and fouled marshes and wetlands. Eleven men were killed when the Macondo Well blew out some 45 miles off the coast of Louisiana.

Three companies were involved: Oil giant BP; TransOcean, which operated the Deepwater Horizon drilling rig; and Halliburton. But BP, one of the largest oil producers in the world, has largely remained the center and focus of most lawsuits, either from plaintiffs in the five Gulf Coast states impacted or through civil lawsuits by the U.S. and state governments.

BP says it has spent $25 billion so far. That includes money for claims the company has paid out in the form of a multi-billion-dollar settlement that keeps growing and the cost of cleanup and remediation. It doesn’t include another $4.5 billion in fines it owes the government over the next five years. BP has set aside as much as $42 billion for a total potential tab when all is said and done. You can see some of the other crucial numbers below: 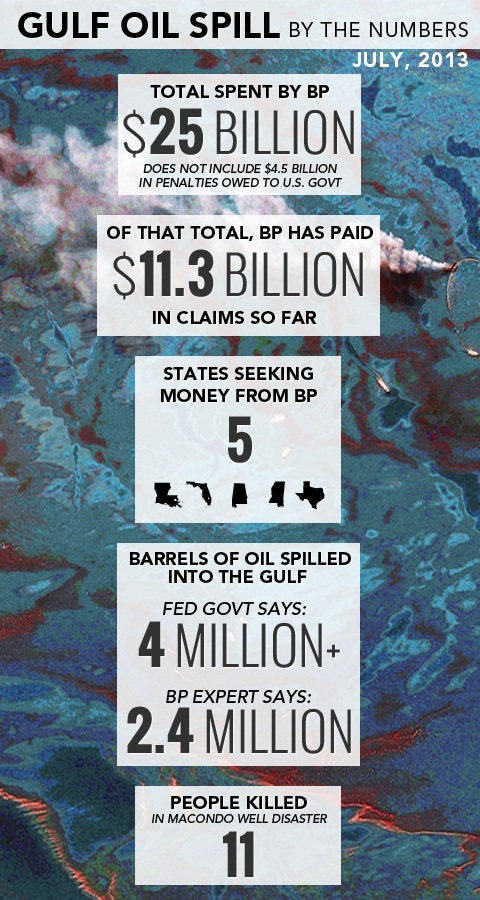 Will that $40 billion-plus be enough money set aside? Should it be? What kind of civil penalties should the company be assessed? Those questions are being fought out in court in Louisiana and we explore some of those questions on Tuesday’s PBS NewsHour with Paul Barrett of Bloomberg Businessweek.

BP argues that the economic claims settlement it agreed to with businesses and affected properties — a settlement that was uncapped — has gotten out of hand. Plaintiffs’ lawyers, BP claims, are now seeking money for businesses that weren’t really damaged by the Deepwater Horizon disaster. The tab for that settlement is $8 billion-plus by BP’s count and growing.

Plaintiffs’ lawyers argue that BP should be paying up more for an accident that devastated a region and impacted thousands of lives. Moreover, they say, how can BP reneg on a settlement it already agreed to?

The settlement is hardly the only legal case facing BP. U.S. District Court Judge Carl Barbier of New Orleans, who approved the settlement and rejected BP’s plea to change it, is overseeing all of the litigation surrounding the company. This fall, he will hear the second phase of a non-jury trial to determine the liability of BP and other companies. If BP is found to be in violation of some of the toughest penalties associated with the Clean Water Act, BP could face additional fines of up to $17.5 billion. Some of those fines will be determined by just how much oil seeped into the Gulf. Estimates used by the government and others say it is well above 4 million barrels. But in a recent status conference hearing, a new report put together by a BP expert witness contends it was much lower, closer to 2.4 million barrels.

This battle will be playing out for months to come. We’ll be covering it as it goes and Paul Barrett gives us a taste of it Tuesday.