Payments for claims tied to the BP oil spill in the Gulf of Mexico are set to crack the $1 billion mark next week, but there are still at least 20,000 claims that have yet to be resolved and there seem to be a larger number of cases of fraud than expected. 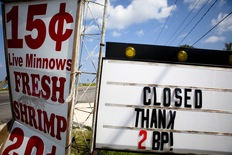 Five weeks after taking over as the administrator of BP’s $20 billion oil claims fund and facing criticism for the pace of his decisions, Ken Feinberg told the NewsHour in a telephone interview that he believes he has made good progress on awarding payments in a more timely manner to individuals and businesses along the Gulf Coast.

“This program has been subject to a good number of mid-course corrections in the last five weeks, leading to sea change of the way we handle payments,” he said.

Feinberg had been criticized by residents and local officials for failing to deliver on promises to provide emergency payments within 48 hours for up to six months of lost wages. That pledge also included a promise of emergency payments to businesses for losses they’ve suffered within a week of receiving claims and proper documentation.

The Justice Department also sent a letter to Feinberg in mid-September, rebuking him for the pace of decisions. “Many of these individuals and businesses simply do not have the resources to get by while they await processing,” wrote Thomas Perelli, the associate attorney general.

There are still at least 25,000 claims that have not been paid yet. Roughly 2,000 of those claims are in Florida, which Feinberg contends are tough calls because of questions of proximity.

The lawyer, who oversaw the 9/11 compensation fund and served as the Obama administration’s pay czar for recipients of bailout money, apologized for the delay and said part of the problem was that he was too optimistic about the timing.

“What happened was that I oversold the program,” Feinberg said. “In some cases, because the documentation was so weak, and it took so much longer to review a claim than I thought, people were frustrated. There are virtually no delays now.”

Marcia Mandel, who filed a claim in late August for lost income on behalf of her hotel, the Marco Island Lakeside Inn, told ProPublica a few days ago that her application was still under review.

“Saying the backlog is gone is nonsense,” she said.

Still, roughly 32,000 individuals and 18,000 businesses have received emergency payments. The range has varied from $1,000 for an individual to as much as $1 million for a company that documented major damages when it couldn’t secure enough fish during the spill. The largest number of claims have come from Florida and Louisiana.

But in total there are still at least 25,000 claims that have not been paid yet. Roughly 2,000 of those claims are in Florida, which Feinberg contends are tough calls because of questions of proximity. Should a hotel along the Keys — or in Tampa — be eligible because reservations were canceled in connection with the oil disaster?

In Florida, several state officials including Gov. Charlie Crist and Alex Sink, the Democratic candidate running to succeed him, have spoken harshly about a number of Feinberg’s decisions.

“This is ridiculous. It’s not just ridiculous, it hurts people,” he said earlier this week. “There are people hurting out there who will go out of business because they’re not getting their claims paid.”

Most of the immediate claims throughout the region that haven’t been resolved yet — maybe 20,000 or so — are cases where Feinberg says he needs some basic documentation to prove losses. Local businesses and fishermen say they ran a cash operation that never had that kind of paper trail.

“They say, ‘I run a cash business, thank you.’ It’s a more serious problem than I thought,” he says. “I need something to go on.”

Feinberg also says he believes his team — known formally as the Gulf Coast Claims Facility — is finding more examples of fraud or scams than he expected. He is suspicious of 1,000 claims already and BP is questioning the validity of 800 they already paid.

Then there’s what he calls an outright scam.

“I’ve got 4,000 claims from one parish in Louisiana,” he said. “They read, ‘I used to live off the sea and eat fish every day. Now I have go to the grocery store.’ It’s a ridiculous scam and these claims all have the exact same paragraph. There’s no difference between them.”

What lies ahead may be more daunting.

After the deadline for immediate and emergency claims passes on Nov. 23, Feinberg will have to determine what will be the criteria to decide long-term claims.

That decision is fraught with questions.

Again, the question of geography might loom. But there’s also the question of what kinds of conditions Feinberg might oppose if a claimant receives a major payment, something that he hopes to decide within the next 30 days.

“I’m inclined to say to the plaintiff, ‘I’ll give you a check for, say, $100,000 for your full loss, but first you’ve got to sign a document that you won’t sue anybody — BP, Halliburton, Transocean,'” he explained.

Of course, that begs the question: How can he possibly make decisions about fishing conditions, for example, when scientists are still trying to study the impact of the hydrocarbons in the water and on the fishing areas that were hit?

Feinberg says he plans to consult with top officials at NOAA, Fish and Wildlife Services and Woods Hole, who can in turn help him make educated decisions.

“I will be guided by what they tell me,” he said. But “if it’s not resolved by then and people are having to decide on a hunch, it may make sense to take an interim payment for the moment” without forfeiting their legal rights.