Gut microbes found in hunter-gatherers shift with the seasons

Much like the weather, some human stomachs change throughout the year. The gut microbes of the Hadza, a hunter-gatherer group in Tanzania, shift dramatically as their diet changes with the seasons, according to new research from Stanford University. When applied on a longer timescale, these trends could explain why industrialized populations have a less diverse set of gut microbes and more chronic disease relative to hunter-gatherer populations.

“For much of [human] evolution and migrations, it appears that we harbored certain types of bacteria commonly and then many of those bacteria have gone missing over the course of modernization of society,” said Stanford microbiologist Justin Sonnenburg, who led the study published Thursday in Science.

In an ideal world, Sonnenburg said he would have a time machine, so he could study how the human microbiome evolved to influence human health over eons. The gut microbiome is an army of small organisms, like bacteria, that occupy the lower intestine. Mainly feeding on dietary fiber, these tiny troops assist in food digestion, build vitamins, train our immune system and guard against pathogens.

Without a time machine, Sonnenburg’s next best option was ostensibly the Hadza, one of the world’s few remaining populations of hunter-gatherers, with about 200 still adhering to the lifestyle. Much of their traditional way of life, Sonnenburg said, “gives a window into humanity’s ancient past.”

During the dry season, Hadza consume more tubers, potato-like crops, and wild game like zebra or giraffe, while in the wet season, their diets favor berries and honey. Sonnenburg wondered if Hadza microbiomes, like their diets, would also flux with the seasons. So he partnered with Jeff Leach, founder of the Human Food Project, who had been living with and studying the Hadza for years. 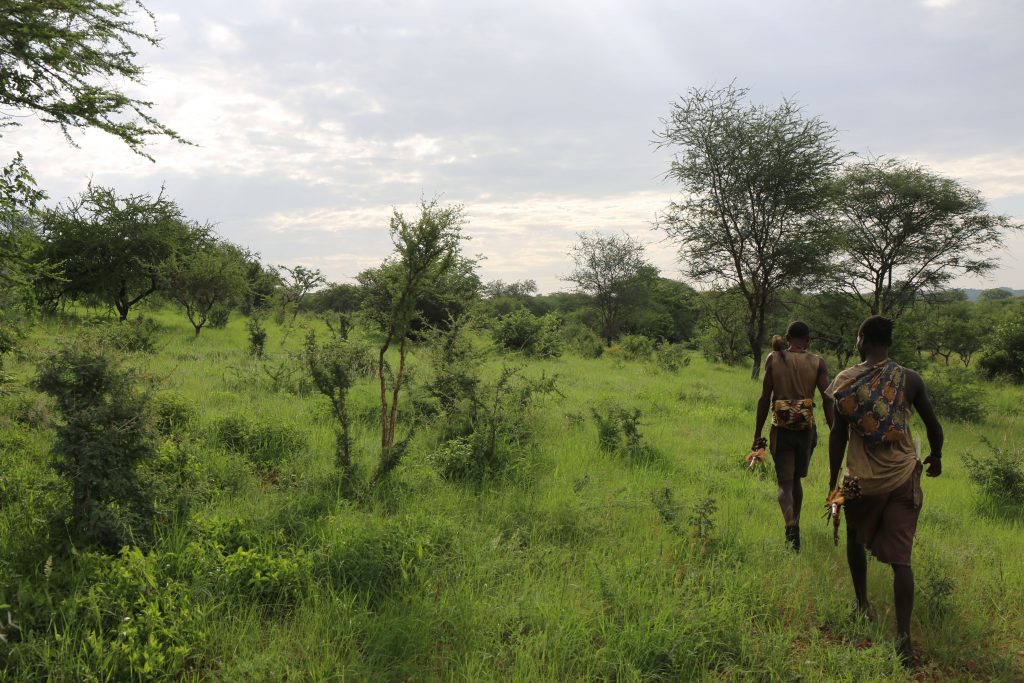 During the dry season, what little water is available forms small pools that attract animals. That makes hunting a more reliable source of food. Photo by Jeff Leach

The team collected 350 stool samples from 188 Hadza individuals over the course of a year. After analyzing the microbes in each sample, the researchers found that the gut microbes did vary seasonally, which aided the stomach’s ability to digest food.

“Given that the changes are so quick and happen every year, [the study] provides support to the claim that a [gut microbiome] change is dependant on the diet,” said University of Minnesota geneticist Ran Blekhman, who was not involved in the study. While previously documented in multiple animal studies, “this is the first study to document the seasonal effect in hunter gatherers.”

But the “jaw-dropping moment,” according to co-author Sam Smits, happened when the team found the biggest fluctuations in the Hadza involve the same bacterial species that are absent in the guts of people living in industrialized societies.

“The Hadza eat 100-150 grams of dietary fiber per day. We Americans eat about 15 grams per day. So I think in the Western world what we are doing is starving our microbial cells,” Sonnenburg said.

But nutritional anthropologist Alyssa Crittenden doesn’t think plant consumption is the best explanation for these seasonal differences. She wished the study had collected more dietary data at the same time the samples were collected. Instead, the researchers relied on diet patterns previously documented by other studies.

Without this information, we cannot be certain what exactly caused the change in gut microbes, she said. Moreover, the Hadza’s way of life has already been influenced by Western society — thanks to nearby cell towers and farming — so Crittenden wonders if Hadza diets can be considered traditional.

“The conclusions insinuate that the Hadza microbiota are ancestral. The Hadza are modern people. They are not fossils,” said Crittenden who works at University of Nevada, Las Vegas. “They are undergoing a massive transition.”

In the future, Sonnenburg wants to investigate if we can repair the Western microbiome and improve health in the U.S. by taking cues from Hadza dietary practices. Western diseases like heart disease and diabetes are virtually nonexistent in hunter-gatherer populations like the Hadza.

“Humans are not just a collection of cells. We are composite organisms,” Sonnenburg said. “Just like ecosystems – like a rainforest composed of thousands of species. We need all of the species to work in concert for us to be healthy,” he said.

Left: During the wet season, the Hadza increase their berry and honey consumption. Photo by Jeff Leach