Three years on, and Hillary Clinton’s personal emails still loom large in political discussions. What started as an afterthought in a March 2013 article by Gawker blossomed into a full-blown scandal two years later, when The New York Times released the details surrounding her electronic correspondence as secretary of state. One sticking point: It took months for Clinton’s team to share her emails with the State Department, which should have been preserved from the get-go as a matter of federal record.

Clinton wasn’t the first secretary of state to use a personal email account for work — the same Times story reported Colin Powell acted likewise — yet for her, the news has festered like a recurring back pimple on the campaign trail. Even during a debate two weeks ago, MSNBC’s Chuck Todd remarked to Clinton:

…many Democratic voters that our reporters have been running into in Iowa and New Hampshire, they tell our reporters over and over again they’re worried about the emails issue, not because they don’t believe your explanation, but because it’s a drip-drip, because the cloud is hanging over your head and that it will impact the general election.

They see your numbers right now and they think it’s the email issue as to why you’re not polling very well.

Why have these emails taken so much fire? Some cite concerns about national security; others says it’s about trust, transparency and respect of the public record.

But a first-of-its-kind study from psychologists at the Harvard Business School provides a nuanced alternative: What’s likely getting under people’s skins the most has to do with disclosure…specifically, the lack thereof. In a series of seven experiments comprising hundreds of subjects from across the nation, the researchers show that choosing to not disclose information is perceived as much worse than revealing secrets…even when those secrets involve highly unsavory circumstances.

For example, when 126 random subjects had to pick between dating someone who doesn’t normally tell a partner about having a sexually transmitted disease versus someone who opted to not answer the question, most respondents — 64 percent — picked the former: a person who willingly neglected to tell the truth about his or her STD status. In others words, people prefer someone who admits to being unsavory over a person who merely avoids answering a question.

Overall, people preferred others who admitted to foul deeds — like having fantasies of domestic violence or cheating on tax returns — 80 percent of time, versus those who hid information.

“The thing that’s super surprising and novel is that people like someone who divulges extremely unsavory stuff — the lowest of the low — over someone who merely abstains from disclosing,” said Leslie John, a professor of business administration at Harvard Business School led the study, which was published Jan. 11 in the Proceedings of the National Academy of Sciences.

The implications extend beyond dating and politics and into job negotiation. If a potential employer asks if you’ve ever smoked a joint, do you mention those frat parties freshman year? Do you lie and hope no one stumbles across the salacious Facebook photos? Or should you respond: “I’d rather not say.”

It’s a game of mental chess, and here are the pieces.

Lying, opting out and the exhaustion of mental yoga

“There’s lots of research on telling lies, but this study is a little bit different,” said University of California business psychologist Dana Carney, who wasn’t involved in the Harvard research. She said lies tend to fall into two categories: lies of commission and lies of omission. A lie of commission happens when a person tells a story that doesn’t follow real events, while a liar of omission fails to include details that should have been said.

The scenario tested in the Harvard study resembles a lie of omission, Carney said, but with a big difference.

“Here you’re saying, I prefer not to answer. I’m not going to necessarily leave something out, but rather I’m going to refrain from engaging about this issue,” Carney said. “They don’t want to be faced with that choice, but it may be perceived as a willingness or intention to lie.”

Consider what happened when 178 subjects pretended to be employers reviewing job applications from two potential hires. One candidate admitted to getting an F in school, while the other refrained from responding. This is a very strong test, John said, because there’s nothing worse than an F. In other words, the hider can’t be a less favorable candidate than the revealer, who for sure has the worst possible attribute.

Yet employers picked the person who admitted to poor grades 89 percent of time. When asked why, the participants thought both candidates likely received a failing grade, but deemed opting out as less trustworthy. 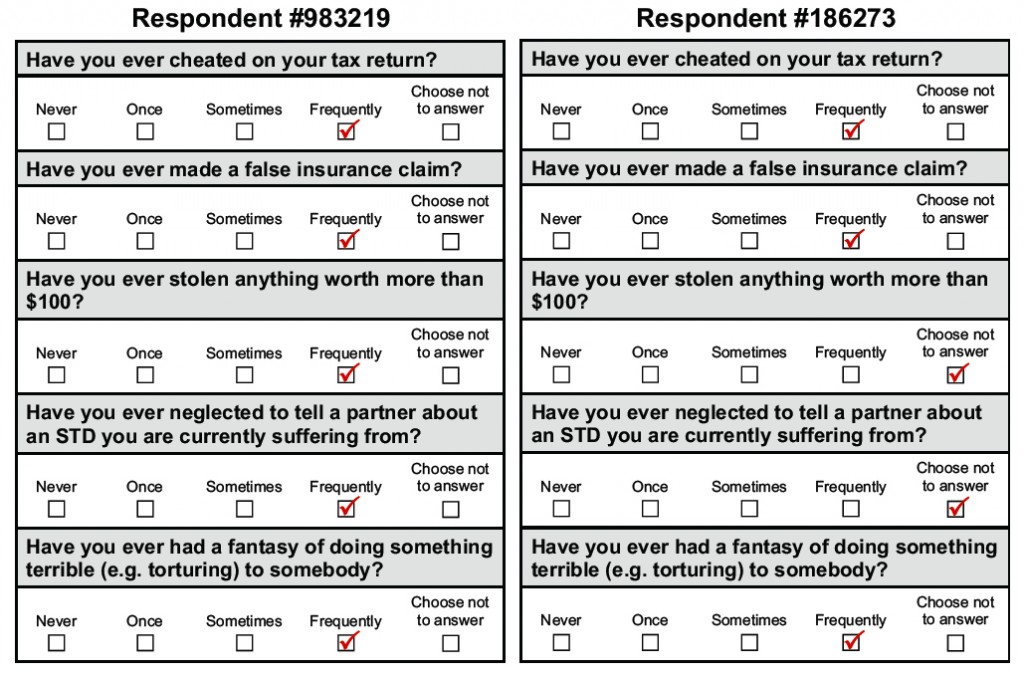 This preference for full disclosure may come from our distaste for mental taxation. “People are cognitive misers,” Carney said, an idea that comes from social psychology pioneers Susan Fiske and Shelley E. Taylor.

“We’re mentally cheap. We want to spend as few resources as possible getting to know other people or making sense of them,” Carney said. “When a person opts out of answering questions, that makes me as a perceiver work harder to understand them.”

Your mind is forced to solve an equation of “Are they concealing this information?” or “Do they just like being private?” or “Is there something else going on?”

A mental tax in the case of opting out runs contrary to how people typically react, said Cait Lamberton, a social scientist who studies consumer behavior at the University of Pittsburgh. Prior work suggests when people don’t know details about others, they engage in something called “egocentric anchoring,” wherein they infer that the other person is a lot like them, she said.

“In the dating context, people start with the assumption that others are like them, which gives first dates this sense of a magical, perfect match, but then progressively perceive more dissimilarity between themselves and others,” she said. “So, we usually expect that when we know less, we like more.”

But the Harvard study picks up on something new. Leaving a blank space, figuratively or literally, opens the door even wider to distrust and distancing.

“The difference between unintentional and intentional hiding may appear subtle, but it leads to a 180-degree flip in effects,” said Lamberton, who wasn’t involved in the Harvard study.

So should you dish all of your secrets? 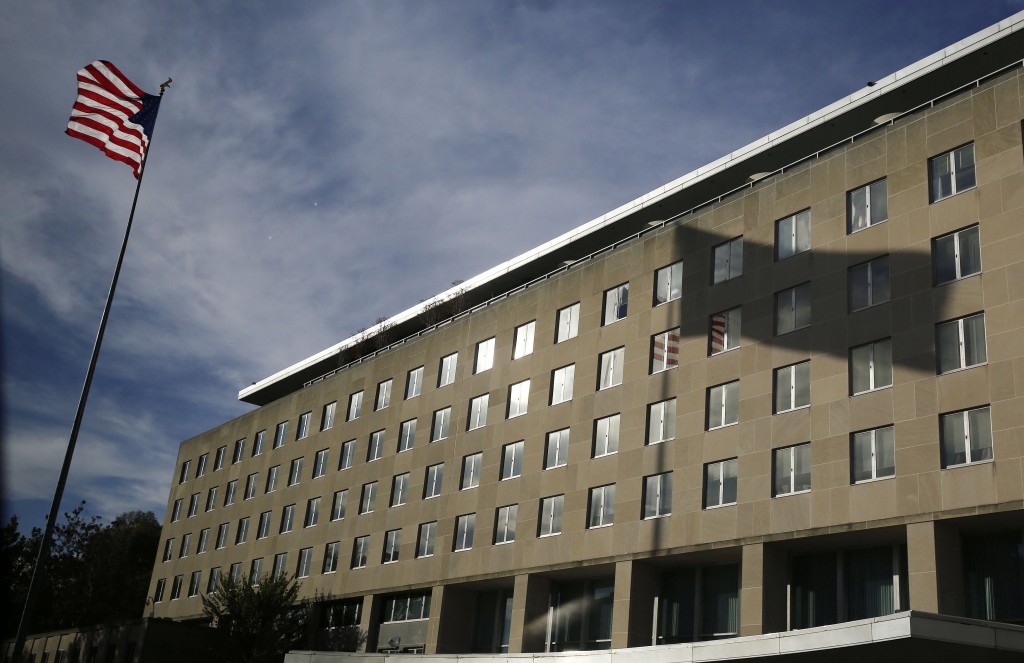 Is the Department of State brewing psychological distrust in the Clinton campaign by delaying the release of her email records? Photo by Larry Downing/Reuters

One of the final experiments in the Harvard study examined how people’s instinct fared when faced with the choice between disclosing and opting out. Did they recognize that outsiders might view abstinence as problematic? They didn’t.

The study had 103 people imagine that they had smoked marijuana and now faced a job application about prior drug use. The subject then had to pick between saying “yes” or choosing not to answer. Potential employees chose not to answer 70 percent of the time. On the flip side, a similarly sized panel of employers preferred a job applicant who replied “yes” and admitted to past drug activity.

Readers shouldn’t view this result as a free license to yell out their deepest darkest secrets during a job interview, of course.

“While employers may say that they’d rather know if their employees have engaged in certain acts in the past, and may personally like you better for being straightforward, that doesn’t mean that they’ll universally be motivated to hire you,” Lamberton said.

Rather she and Carney view the study as first step into quantifying when it’s OK to be yourself.

“If you’re constantly trying to manage other people’s impressions of you, by unlinking yourself from others pictures on Facebook for instance, that too has unintended consequences.”

And this might be the fuel driving Clinton’s email scandal, Carney said.

“When you’re a public figure, a personal situation occurs and the world doesn’t necessarily expect you to disclose because it’s a private matter, then opting out should be fine,” Carney said. “For example, the world has largely forgotten the Beyonce and Jay-Z elevator shenanigans from a few months ago. They made this one very light comment and it just went away. People lost interest.”

By contrast, Clinton and her emails have national appeal because of what people think they might reveal, regardless of the contents of the emails. By the logic of this study, the State Department’s delayed and partial release of the emails likely adds to the public distrust of Clinton, too.

“She used a personal account, so it’s of interest to us because of national security, but also because it helps us understand her as a potential leader of our country,” Carney said.

Or are they, Bernie?

Lamberton offered as a counterpoint, the Bernie Sanders campaign’s admission that they engaged in electronic trespassing of sorts in Hillary Clinton’s campaign data.

“When asked if he owed Clinton an apology, Sanders simply said, “Yes, I apologize.” To many, this was seen as a sign of integrity – and the issue was left in the dust, rhetorically speaking,” Lamberton said.

When the stakes are lower, the calculus changes. Between friends, the findings suggest that people shouldn’t be afraid of admitting flaws or good deeds because doing so helps create trust and liking, she said.

John said her team isn’t at the point where they can give advice on every scenario of public disclosure, but that’s where they want to take the work, especially given the ease of which people share information on social media and the Internet.

“We see this issue come up so often now because Internet media is still a very foreign thing for people to navigate. We’re really good at navigating face-to-face interactions, but when it comes to online disclosure, it’s a whole medium that we don’t know how to work with,” John said.

Left: Democratic presidential candidate Hillary Clinton listens to a question as she testifies before the House Select Committee on Benghazi, on Capitol Hill in Washington October 22, 2015. Clinton deflected harsh Republican criticism of her handling of the deadly 2012 attack in Benghazi, Libya, at the testy hearing in Congress that seemed, at the time, unlikely to put a dent in the her campaign. Photo by Jonathan Ernst/Reuters