What Hawking meant when he said ‘there are no black holes’

Last week, famed physicist Stephen Hawking made headlines with this bold statement: “there are no black holes.”

Those words come directly from Hawking’s latest paper, but they are contained within a larger point involving the mechanics of a black hole and its famous “event horizon.” (That’s the area thought to exist around a black hole from which nothing, not even light, can escape.) To be clear, Hawking was not claiming that black holes don’t exist. Astronomers have been observing black holes for decades, said Joseph Polchinski, theoretical physicist at the Kavli Institute for Theoretical Physics at the University of California, Santa Barbara.

What Hawking did was propose an explanation to one of the most puzzling problems in theoretical physics. How can black holes exist when they seem to break two fundamental laws of physics — Einstein’s laws of relativity and quantum mechanics? We’ll explain.

First, a quick Physics 101 reminder. Einstein’s theory of general relativity first conceived a black hole as an object with a gravitational pull so powerful that anything — gas, dust, stars, planets, whole galaxies, even light — that crossed the event horizon would fall in and be forever trapped and ultimately crushed, never to escape.

But with the emergence of quantum mechanics in the mid-20th century, many believed that this information — the particles and matter sucked into the black hole — had to be conserved, somewhere. According to quantum mechanics, a black hole could shred a book into its subatomic particles, but as long as all the pieces still existed, it was possible to reconstruct that book, Polchinski explained.

Then Hawking published a paper on black holes in the 1970s, and everything changed. He proposed that in fact, black holes were losing mass and would eventually evaporate. If they evaporated, they would take all traces of what fell into them with it. The information would not, in fact, be conserved. It would vanish.

Suddenly, science didn’t make sense. The field of physics was faced with a giant dilemma.

This question of what ultimately happens to all the stuff drawn into the black hole has become known as “the information paradox.”

“This is a paradox that hasn’t been completely resolved,” said Juan Maldacena at the Institute for Advanced Study in Princeton, N.J. “There are various ideas for how it could be resolved, but I think no one has convinced the other members of the community that his idea is correct.” That includes, he said, Hawking’s latest proposal, which reimagines the event horizon.

In a nutshell, Hawking seems to be saying this: instead of an event horizon, there is something else he calls an “apparent horizon.” In this apparent horizon, matter and energy is temporarily suspended, but then released. If this is true, it changes black holes as we know them. 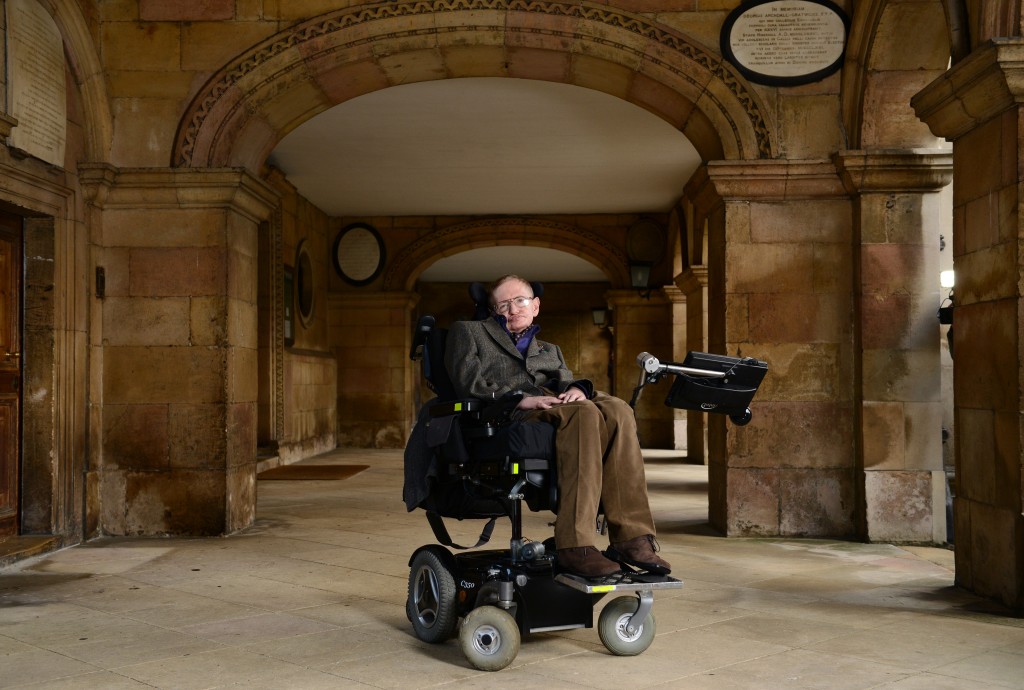 Theoretical physicist Stephen Hawking, who is famous for his work in studying black holes, announced last week “there are no black holes.” But what did he mean by that? Photo by Karwai Tang.

“The absence of event horizons means that there are no black holes — in the sense of regimes from which light can’t escape to infinity,” Hawking wrote in his paper.

According to his proposal, black holes do trap information for a long time, but that information can, eventually, escape, Polchinski said. He added that Hawking’s proposal remains untested.

“The broader picture is right now that we really have this conflict between two theories, quantum mechanics and Einstein’s theory of gravity, both of which we have strong reason to believe are true. And yet when you combine them, they make this prediction of information loss that we believe is false,” Polchinski said.

Over the past 40 years, physicists have proposed multiple solutions, forcing the field to rethink black-hole behavior. In 1992, for example, Leonard Susskind, Larus Thorlacius and John Uglom proposed an idea known as “complementarity.”

That’s where Hawking’s latest paper comes in, suggesting physicists need to rethink that event horizon. His latest proposal suggests that there is in fact no event horizon to burn up. Instead, the apparent horizon becomes the real boundary.

If you’re confused, you’re not alone, said Matt Strassler, blogger and visiting theoretical physicist at Harvard University. The entire theoretical physics community is still working on these problems, and this represents merely one proposal among dozens.

“There’s all sorts of cacophony in the field … The problem is no one can come up, so far, with something you can actually calculate. So it’s ideas and proposals and approximations and guesses,” he said.

Notably, Hawking’s work has not yet been peer-reviewed, and it contains no equations, so there’s no way to test his new ideas, Polchinski said. Because of that, he added, his statement about black holes can’t be considered a breakthrough in science — yet.

How can any of these paradoxes around black holes be answered? For now, the mathematical formulas to test and solve these new hypotheses simply aren’t there, Strassler said, adding that these are conceptual problems, not just a math problems.

“These aren’t the kind of calculations you can just throw at a computer. Even to figure out what questions you need to ask isn’t obvious,” he said. “The calculations themselves involve very, very subtle effects that a computer would never be able to keep track of.”

The problems have everyone in the field confused, Polchinski said, but that confusion is thrilling for physicists. Solving a paradox is the way the field advances, he said.

“It’s not so much that there’s a mistake, but somehow, some assumption that we believe about quantum mechanics and gravity is wrong, and we’re trying to figure out what it is,” Polchinski said. “It’s confusion, but it’s confusion that we hope makes us ripe for advance.”