Hazardous space junk is piling up. Can this satellite help?

Space is vast. But around our planet, it is getting a bit crowded — with space junk.

More than a half million chunks of decommissioned, human-made satellites, lost tools, broken parts and trash the size of a pea or larger whiz at more than 17,000 miles per hour around the planet. Space junk threatens the lives of astronauts on the International Space Station and the functionality of satellites scattered across low Earth orbit.

That is why space enthusiasts are excited about RemoveDEBRIS, the first-ever satellite capable of actively collecting space debris. On Sept. 16, this junk collector deployed a net that snared a piece of space garbage mid-flight in a one-time, groundbreaking demonstration.

Within the next two or three months, the kevlar net and its trapped cargo will fall back toward Earth and burn up in re-entry. But the maneuver required more than just slinging a net to catch a piece of metallic prey.

RemoveDEBRIS represents one of many endeavors geared toward the important task of snatching space projectiles out of the sky. Each project calls for tricky calculations — imagine trying to clean up your room in the middle of a tornado. But one math problem remains unsolved: Who will pay for space trash collection? 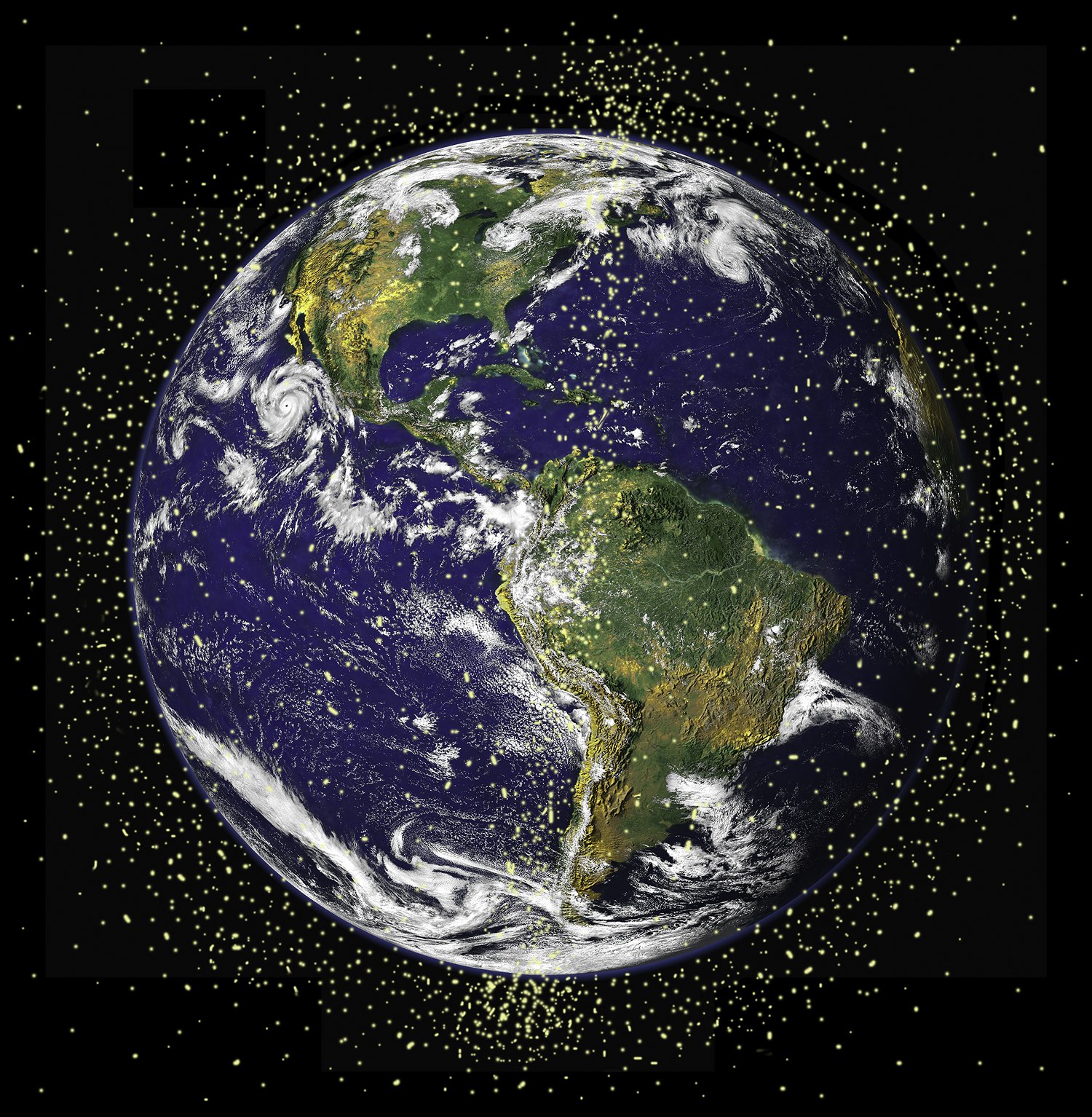 Hundreds of thousands of satellites and pieces of space debris circle the planet in low orbit, zipping by at more than 17,000 miles per hour. The size of yellow points are exaggerated for visibility. Image by NASA

Humans have a tendency to build up piles of discarded material on Earth, said Bill Ailor, an aerospace engineer at The Aerospace Corporation. “We dump it into the ocean or whatever, and assume the Earth absorbs it. We’ve done the same in space.”

Approximately 1,800 active satellites already orbit the planet, and companies like SpaceX, OneWeb and Boeing have proposed launching new satellite constellations in the coming years — on the order of hundreds or tens of thousands.

Those satellites could expand internet access to rural areas, improving the lives of millions around the globe. But once they’ve served their purpose, they, too, might become part of the orbiting trash field.

A piece of space junk will meet one of two fates. It will either slow down enough to fall back toward Earth, burning up in the atmosphere. Or it will smash into another piece of space trash, producing more, smaller projectiles with orbits of their own.

In 1978, NASA scientist Donald J. Kessler proposed a catastrophic scenario where colliding space junk creates a cascade that breeds an impenetrable cloud of fragments in lower Earth orbit. This “Kessler Syndrome” could make space travel and satellite communications impossible for years at a time. In other words, say so long to Skype, weather forecasts, GPS and military surveillance.

Big pieces of debris are easier to track and easier to avoid, said Laura Grego, a physicist and global security expert with the Union of Concerned Scientists. With enough notice, the International Space Station can maneuver away from anything likely to approach within miles of the station. The U.S. Space Surveillance Network warns the ISS and satellite operators worldwide of hundreds of thousands of potential collisions each year. But this network can only track debris the size of a softball or larger using their current technology.

Swarms of puny fragments whizzing through space are silent and deadly. Marble-sized pieces of metal could destroy satellites or punch a hole into the International Space Station. In 2016, a piece of debris no bigger than a flake of paint chipped one of the four layers of glass that make up a space station window.

Meanwhile, space law enforcement is also difficult to navigate. Moving someone else’s debris or colliding accidentally could create political problems, Grego said. Who has jurisdiction if space belongs to all of us?

“It’s absolutely a growing problem,” Grego said. As part of a weapons test in 2007, China demonstrated a missile by destroying one of its own defunct weather satellites. The event created nearly 1,000 trackable debris fragments, and likely hundreds of thousands of smaller remnants. 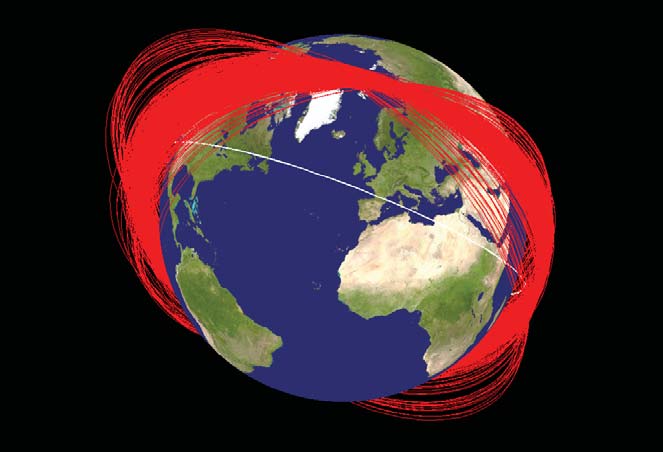 When the Chinese government destroyed one of their own satellites in 2009, the impact created thousands of pieces of trackable debris. Red lines are debris; the white line is the orbit of the International Space Station. Image by NASA

Since then, Grego said, satellite-destroying technology has only improved, and the number of satellites in orbit has only increased.

A web-slinging satellite to the rescue?

A small object glimmers in the distance, extending several arms. It begins to spin.

“You see the target spinning, and then the net envelops the target, which is exactly what should happen,” Guglielmo Aglietti, director of the Surrey Space Center, said recounting RemoveDEBRIS’ first conquest: a piece of engineered debris that grows little extended limbs in order to make it a bigger target. His center at the University of Surrey leads the development and operation of the space junk catcher.

The RemoveDEBRIS satellite launched a small target and then caught it with a net, as a proof of concept. This is the first time a satellite has caught a piece of space debris. Image courtesy of the University of Surrey

The RemoveDEBRIS demo was a milestone, but it cut some corners. The space junk in question was released by the RemoveDEBRIS satellite itself, so their trajectories and speed — approximately 17,000 miles per hour — were nearly the same.

Most real debris won’t be so cooperative. According to Grego, catching space junk can be like “hitting a bullet with a bullet.”

Catching space junk can be like “hitting a bullet with a bullet.”

The Chinese anti-satellite missile likely relied on tremendous calculations of power, weight, atmospheric drag and trajectory to even get close. Just getting any equipment to space at all requires scientists to work through the Rocket Equation, which balances the weight of a rocket with the fuel required to lift it off the planet. The heavier the rocket, the more fuel needed to boost it into space. At the same time, more fuel makes the rocket heavier, leading to some crazy ratios. It takes about 45 tons of modern rocket fuel to propel one ton of cargo into orbit, Grego said.

All of this mass must be aimed properly. Like a quarterback throwing a football to where they hope a receiver will be, rocket engineers have to predict the future position of a moving satellite in order to intersect it.

No matter how accurate the original calculations were, changeable atmospheric conditions like wind or rain mean that specialized sensors and extra rocket boosters must correct course to a particular target.

That’s just to collide with a piece of space junk. Cleaning up space debris, on the other hand, would require a slower, gentler and more precise approach. These junk collectors will need ion thrusters or other boosters to synchronize their movements with the object they are trying to retrieve. In the future, RemoveDEBRIS will test a debris-capturing harpoon as well as a custom camera and software that could assist those complex calculations.

“We decided to do these in-orbit demonstrations,” Aglietti said, “to convince people that these are viable technologies at a reasonable cost.”

Who will pay to take out the trash?

RemoveDEBRIS isn’t alone when it comes to collecting cast-offs in Earth’s orbit.

In a recent experiment, NASA teamed with universities and aerospace companies to conduct a “hypervelocity impact test.” That’s science jargon for shooting a projectile at more than 10 times the speed of a bullet toward a model satellite. The result was utter destruction.

The foam-lined tunnel surrounding the experiment caught thousands of pieces of resulting debris in varying sizes. “Graduate students have been counting those pieces for a year or two now,”said Ailor, who worked with NASA and partners on the hypervelocity project.

These twisted, metal fragments and glass shards will explain what kinds of debris are created when collisions happen in space. The experiment can also offer clues as to how those pieces are likely to spin off and cause mayhem. 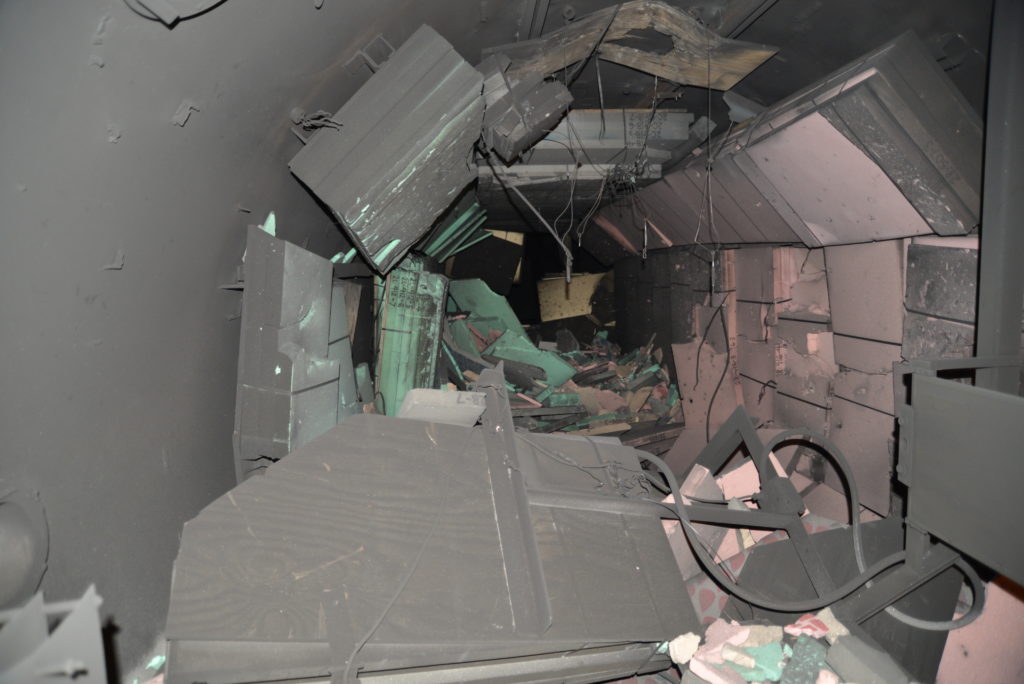 The tunnel used for the impact test was lined with foam slabs to catch pieces of debris. They did not all survive the explosion. Image courtesy of the Aerospace Corporation

Brane Craft, a low-cost debris removal device, is another concept in early development. Brane Craft will move slowly toward space junk and will envelop it in its flexible plastic body. Its tiny thrusters will then ferry the debris back toward the planet.

Meanwhile, the U.S. Air Force is working with Lockheed Martin to create a “space fence,” a radar system that will be able to track smaller debris with greater precision, so satellite operators can avoid more potential collisions.

As with humanity’s Earth-bound pollution problems, the best solution to space junk might be to curb what gets put into space in the first place. But while extra maneuvers costs satellites both fuel and time, if space gets too crowded, there may be no other option.

The price of collecting this trash could be steep. Aglietti said the RemoveDEBRIS mission, including research and development, materials and launch cost about 15 million Euros ($17.7 million). The European Commission paid for approximately half the project, and the remaining funds came from the 10 technology companies and universities involved in making and deploying the test satellite.

“This one was a technology demonstration,” Aglietti said. “But if you go and capture a real piece of debris maybe 10 meters long, weighing a few tons—the size of a bus—you need to scale up. The cost is going to be higher. We all agree that it’s a good idea, but who is going to pay?”

Left: As the amount of space junk grows, researchers are figuring out how to bring it back down to Earth. But can their technology solve the problem?