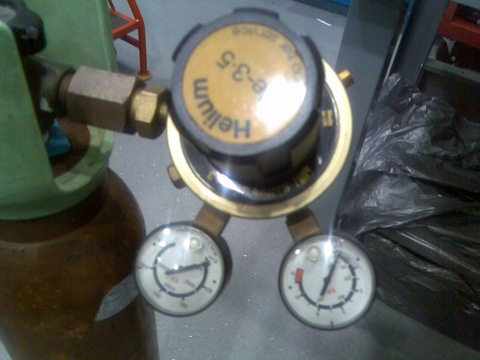 Inside a storage room at Andrew’s Air Force Base is a cluster of neutron radiation detectors, and alongside them, a tiny amount of plutonium, used for training drills. One detection device fits into a backpack. One is designed for aircraft, another for container ships; both are aimed to target smuggled nuclear material. Nearby, a pop-up window on a computer screen reads, “Warning! Neutron source present!”

Inside the room’s many lockers are North Face backpacks, packed with respirators, pagers, boots, helmets and both arctic and hot-weather wear. Black boxes full of equipment line industrial shelves.

First responders from the Nuclear Radiological Advisory Teams are poised at all times to grab their gear and spring into action in response to radiation threats. “We can expect from the time that a radiological fingerprint arrives at the labs to have an answer within one hour,” said Joseph Krol, associate administrator for the Office of Emergency Operations at the National Nuclear Security Administration. “We’re making it much more difficult for an organization to move radiological material.”

The detectors are primed to target gamma rays and neutron emissions, which are present in most radiological material. But to work, they require an important ingredient: helium 3. Helium 3, a non-radioactive isotope of helium, is extremely sensitive at detecting neutron radiation. When the gas interacts with neutrons, charged particles are formed, which can be easily screened by the sensors.

But here’s the problem: the helium 3 supply is extremely scarce and depleting rapidly. Helium 3 only represents .0001 percent of the nation’s helium. Most of the nation’s supply has been plumbed from the decay of tritium, an isotope of hydrogen, which is used to make nuclear weapons. Helium 3 is produced when nuclear weapons are dismantled, but with stockpiles shrinking, less tritium means less helium 3.

And it’s not just national security that’s affected, but also the research and medical communities. The rare isotope is used in cryogenics – it can reduce temperatures to near absolute zero – and medical imaging technology, providing a non-radioactive source of lung imaging.

The U.S. stopped making helium 3 in 1988, but with ramped up security systems after the 9/11 attacks, the need for it has far outstripped demand.

There are other ways to make helium 3, with particle accelerators and nuclear reactors, for example, but neither are easy nor cheap. Acquiring it from Canadian nuclear reactors has been proposed as a short-term fix.

Some have even proposed mining the moon for the isotope. Gerald Kulcinski, a professor of nuclear engineering at the University of Wisconsin-Madison explains the idea: About .01 metric tons of helium 3 exist on Earth, but some estimate that as much as a million metric tons exists on the moon, deposited by solar wind.

“Apollo astronauts brought back rocks, and when they were analyzed, they all had helium 3 in them,” he said.

Kulcinski and his research team have focused on helium 3 fusion reactions as a possible radioactive-free energy source. They’ve been using their supply of the gas to suss out reactions and understand its physics, but the price recently skyrocketed from $1,000 per gram to about ten times that amount, essentially grinding the research to a halt.

“It does not occur in nature,” Kulcinski said. “If that source goes away, there is no other place on earth to get helium 3…If we can’t get helium 3, then our research will be finished.”

After a hearing held in April 2010, the House Science and Technology Committee concluded that mismanagement contributed to the shortage. The shortage could have been managed without this level of disruption, its resulting charter states.

“Instead,” it reads, “everyone is surprised and scrambling to identify alternatives, suspending their research and their production lines while hoping that a breakthrough in sources of [helium 3] or alternatives to [helium 3] happens very, very rapidly. The failure
to manage the stockpile with an eye to demand, supply and future needs has had real
consequences for many, many fields.”

You can read more about the threat of nuclear material and “dirty bombs” In Miles O’Brien’s report, How Tough Is it to Build a Dirty Bomb?